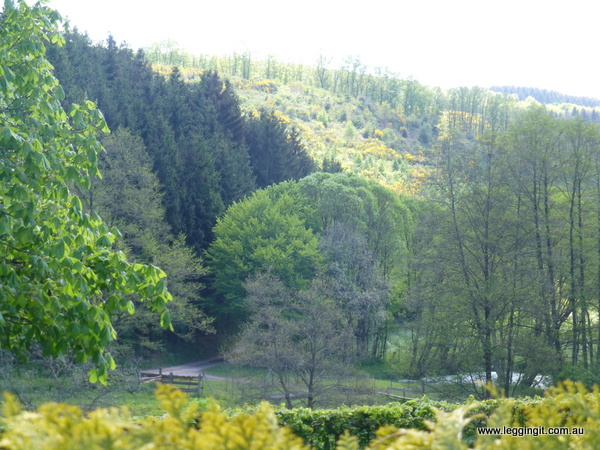 Too soon it was time to say goodbye to our friends and start riding to Luxembourg for our first housesit. Leaving Namur we headed towards Bastogne taking the smaller roads which lead along the river passing through small villages and towns. The old houses and churches were beautiful and once again it was nice conditions a little overcast but still dry. Arriving in Bastogne the satnav took us in circles until eventually we saw a sign to one of the many WW2 museums and headed for it. We arrived at the Bastogne Ardennes 44 Museum and found they were setting up for Memorial Day services on the weekend. The memorial with all the names of the American states was cordoned off as they were busy erecting staging and lights. There was also flames being tested with fire balls shooting from the memorial so we were not sure if this was a solemn occasion or a re-enactment.

The museum had a cloak room with storage lockers for coats and wires with locks for helmets. This impressed us a great deal. The museum is quite modern with audio-visual displays which follow the lives of four people involved in the Battle of the Bulge, a school boy, a female teacher, an American soldier and a German soldier. Throughout the museum the audio guide kicks in and we heard their stories from day to day. There were also lots of artefacts and the bigger stuff like tanks, guns and jeeps. Part of the audio-visual tour were interactive cinemas where you became part of the battle from briefing rooms with 3D vision, to a room set as a fox hole in the forest.

The really disappointing fact was the dismissal of smaller countries in the two World Wars. The museum stated that there were 44 countries involved in the first war but of them only 10 rated a mention. A lot of Aussies, Kiwi’s, and Canadians would probably feel outraged like us as not far from here many of our relatives still lay in Belgian soil. Maybe being included as part of the British Army is mildly acceptable but then further on to be called the English Army is outrageous. British Empire yes, English Army no. I think maybe the museum has lost a bit by becoming too much theme park.

After lunch we headed on to Luxembourg and once again the Satnav took us on a circuitous route. The ride was beautiful however, through verdant fields of young wheat, golden fields of rapeseed, thick forests, winding up hills and down through valleys. We passed a few villages on the way, houses with white plastered walls, grey slate roofs or grey stone buildings showing their age and character. The villages all had little churches topped with high slate covered spires. Like Belgium the villages supported the local farming communities and we passed a few farmers happily driving their massive tractors through the streets.
We finally arrived at the road to our’ housesit to find it blocked off for road-works so rode up through the hills to find an alternative route. Eventually we found a way in and were soon at our address being welcomed by the house owners who also are couch surfers.