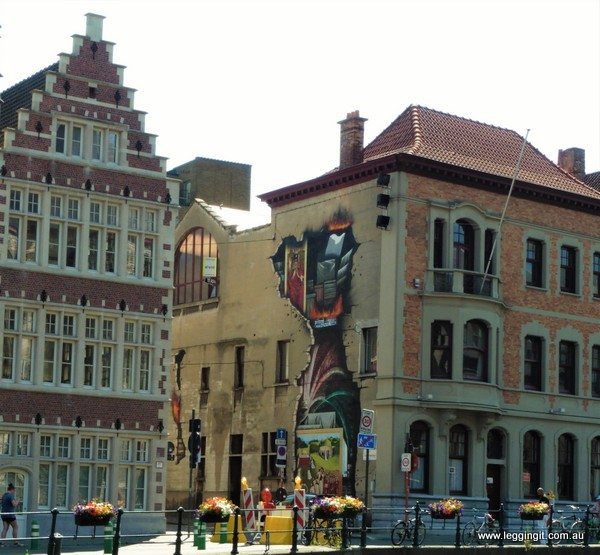 Today we woke to a breakfast which can only be described as colossal. There was no chance of sleeping in because Belgium has turned on the heat and left it on overnight. It’s quite unbelievable as this is the first time we’ve had such hot conditions in Belgium. Our Belgian friend always jokes “it’s raining, welcome to Belgium”and every time we’ve visited it has rained. After breakfast we headed into Ghent, which although not the capital of Belgium is one of the major stops for tourists. 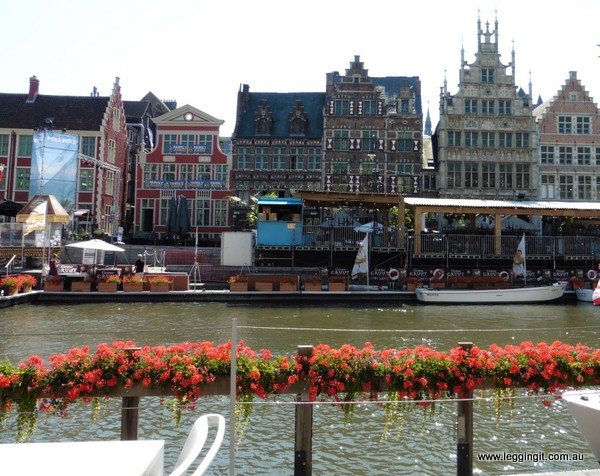 It’s hard to imagine but back in the middle ages Ghent was one of the most important cities in Europe. It was second only to Paris and it all came off the sheep’s back. Back in the 14th century Ghent was the centre of wool production.
Unlike many other cities of Europe instead of being controlled by royal families during the middle ages Ghent was controlled by forty wealthy families. The rich merchants even aligned themselves with France . This didn’t set too well with the Flemish counts or the local trades and guilds who rebelled against the French.
The crackdown which inevitably came saw the city leaders paraded before Emperor Charles V dressed in hair shirts with nooses around their necks. It became a badge of honour for locals to be called noose wearers. The rebellious streak and rebellion against authority became a trait that locals were proud of.

After a downturn in the city’s fortunes from the 15th century, the city became rich again after an English spinning mule was smuggled into Ghent. The mechanisation of the textile trade in Ghent transformed the city into the centre of the European industrial revolution, in the late 18th century. With the industrialisation of the city, workers conditions were pretty bad and Ghent soon became the birthplace of trade unions.

These days the textile mills have all gone and only the rich old buildings are a reminder of the city’s past.

Castle of the Counts 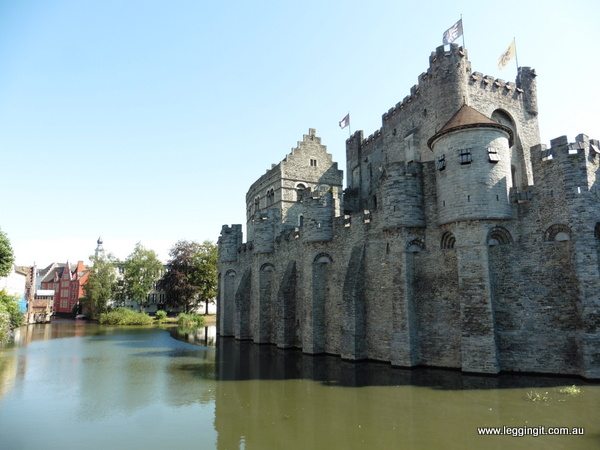 Arriving in the centre of Ghent we parked up on the near the Castle of the Counts. The castle dates from 1180 and is the only castle remaining in the whole Flanders region. The castle became a cotton mill in the 18th century. Since it was converted to a museum all the buildings which were built onto its walls have been demolished and it has reverted back to its original shape.
Not far from the castle on the edge of the old fish-markets is the Tourist Bureau. At the Tourist Bureau we were able to pick up a map and some information about Ghent. The map had a great walking tour with descriptions of the points of interest, which gave us a great introduction to the city.
Ghent is in party mode at the moment with the week long Ghent festival. Throughout the city centre various stages are constructed with performances going late into the night. The stages are situated in the many squares which surround the central city. There’s no shortage of bars, cafe’s, restaurants which have all taken advantage of the sunny weather by setting up outdoors.

Unfortunately the information bureau had no pamphlets on the festival in English,  so we weren’t able to find out what acts were playing, where they were playing and at what times. It was pretty frustrating.

Reversing our course we headed back across the bridge near the castle to the tavern of Gekroonde Hoofden (The Crowned Heads). It’s one of the feature buildings on the street famous for its antiques. The beautifully restored 16th century building has fourteen heads of the counts of Flanders on its facade and these days the tavern is home to a restaurant.

We headed down Jan Breydelstraat a street with a beautiful little park called the Appelbrugparkje with a lovely little cafe amongst the trees. It really was an oasis amongst the hub-hub of the city.

Not much further along we stopped at the former trade port of the city. The streets of Graslei and Korenlei look down from either side of the canal. These days cafe’s ring the former trading hub of Ghent. It was a nice spot to enjoy the sun and watch the tour barges setting up for their daily tours. It also has a most remarkable view of the old city skyline. 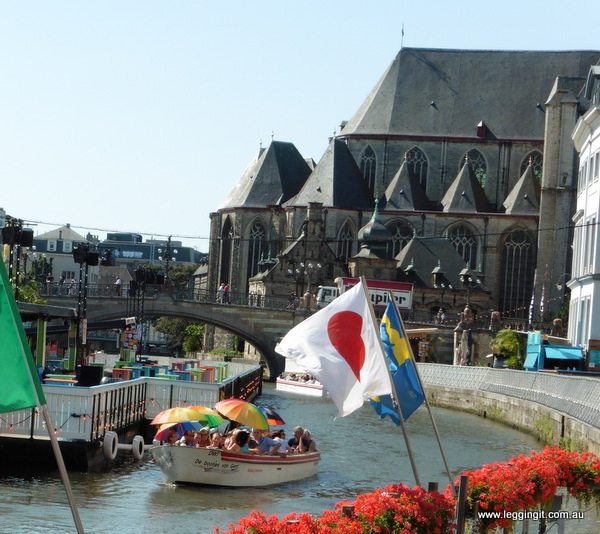 Around the area more stages were set up in readiness for the festival. Just beyond the old port St Michael’s bridge crosses the river and looks over the St Michael’s Church which is just beyond. The church was built around the 1440’s with the earlier parts of the church dating from the 1100’s. It’s an odd looking church with the spire missing from the tower. During the construction phase the church simply ran out of money so the spire was never completed. Like many churches in Europe during the Protestant Reformation in the late 1570’s the church was attacked by Calvinists, looted and parts of it destroyed. The interior was barricaded off, maybe they still don’t trust the locals. 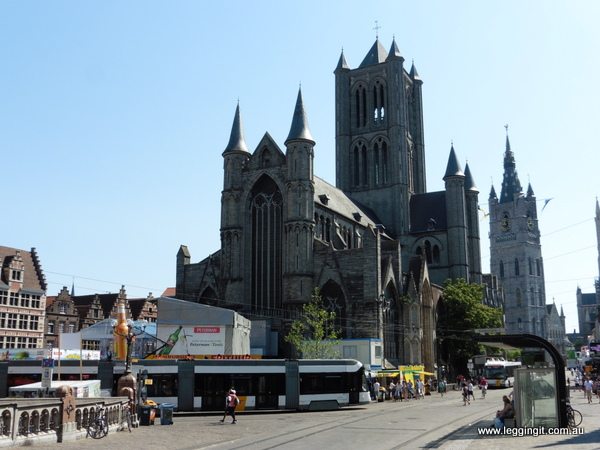 We crossed the St Michael’s bridge we had another great view up the canal as we headed up the street which seemed to be lined with churches. Our first stop was St Nicholas Church which is one of Ghent’s most iconic buildings.
St Nicholas’ Church was built in the 13th century is a quite unique building design. It’s built in a local gothic design but features round turrets on the corners of the building. The church is unlike any we’ve seen before with its blue stone and grey slate roofed turrets. 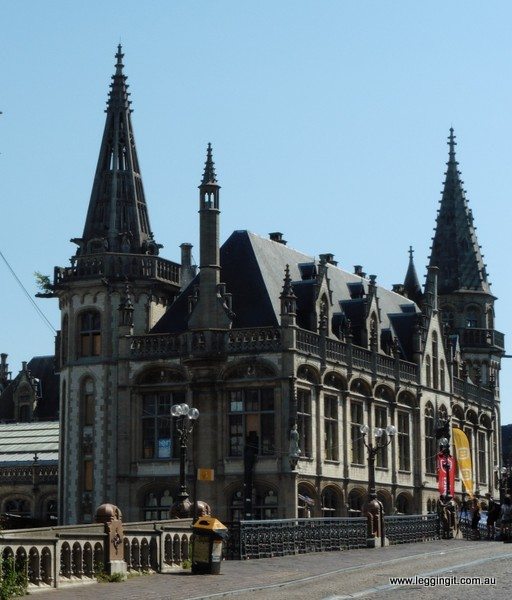 Just beyond St Michael’s the Masons Guild Hall was surrounded by another stage in readiness for the entertainment. Even though it was almost lunch time we still hadn’t seen hide nor hair of the promised entertainment.
Not far from the Guild Hall we stopped off at the Belfry. The Belfry is the second highest tower in Ghent and was once the domain of the town guards.
They kept an eye on the city,looking for fires and invaders. 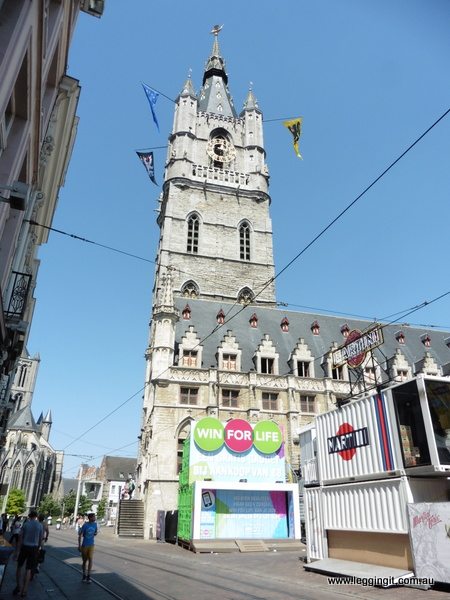 St Bavo’s is just beyond the Belfry at the top of the street. These days along with the tower of St Michael’s and the Belfry it forms the view of three towers which is best seen from the middle of St Michael’s bridge. St Bavo’s Cathedral is the oldest parish church in the city. There’s been a church on the site since the 10th century and the current gothic cathedral was completed in 1559. Currently the facade is under renovation but we were able to slip inside to view the baroque marble altar and the famous altarpiece.

The Ghent altarpiece was painted by Hubert van Eyck and named “the Adoration of the Mystic Lamb”. The polyptych was commissioned by Joos Vijd, the mayor and benefactor of St John the Baptist Church which was formerly on the site. Commissioned in 1500 the twenty oak panels portray scenes from the bible and also include the three Ghent towers, and of course the benefactor and his wife. Over the years the altarpiece has had amazing escapes from destruction. It was hidden during the Iconoclastic Fury which spread through Europe with mobs destroying statues. It survived the Calvinist Republic, the cathedral fire, occupying German troops in WWI, and once again WWII. At different times panels being removed and sent to museums but only one remains missing. It was stolen along with another panel in 1934. One panel was recovered however the other panel still remains missing. These days security is a little tighter. On the left hand side of the nave a modern version of the famous polyptych is displayed and it’s pretty cool.

After visiting so many churches it was time to take a break in Sint-Nicholas Square. As all the small convenience stores and stalls were shut we were forced to buy water. Unlike most European places  they don’t serve water with coffee. Not even tap water when you ask for it so, Oh my god €7 for a bottle of water. Compared to these people Ned Kelly was a gentleman. At least he only stole from the rich.Due to the price hike we lingered over coffee for longer than normal, which also gave us a time to cool down a bit. The city was so humid and the sun felt like it was coming through a magnifying glass. 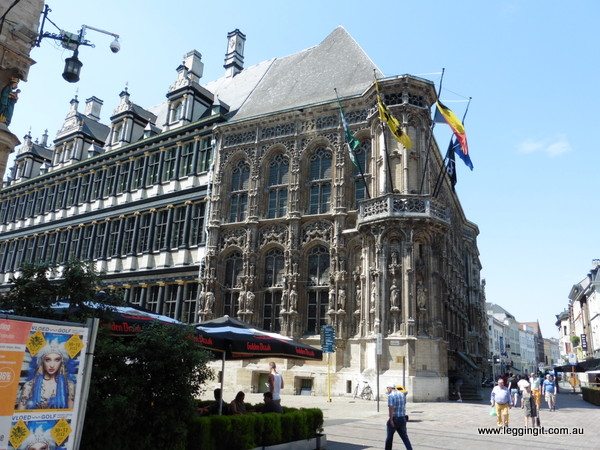 Eventually we headed towards Belfortstraat where a mixture of old building styles greeted us. The town hall is built in a mixture of gothic and Italian renaissance styles dating from the sixteenth century. Towards the bottom of the street another stage was set up alongside St James Church (St Jacobskerk). On the far side of the church a flea market stretched down the street and we had to dodge between stalls to find the entrance.
Inside the church a cafe gave the interior a real welcoming feeling. It was a lovely little church which was a lot more simple than the big churches up the road but with that something.

Our tour concluded at the Vrijdag Markt (Friday Market) square where we discovered a display on women. It was an interesting display centred around issues impacting  women all over the world. Unfortunately like everything in this town all of the signs were in Dutch, without English translations but it really piqued Michele’s interest. 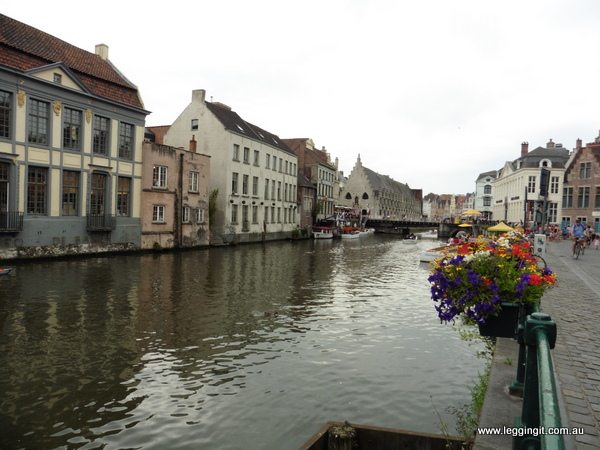 Eventually we wandered back to the Fishmarket square near the Tourist Information where we found an outdoor cafe. The entertainment had just started and it was a variety act based around impersonators. It was interesting watching the show with everyone speaking and singing in Dutch. That included English songs that we knew. As expected the Belgian rain just couldn’t stay away and we copped a little downpour. Just on dark we headed back to the apartment.
Tomorrow we head to Dunkirk on our way back to England.