After another warm night this morning we woke to an amazing breakfast, exactly what we needed for our journey to Oostende then on to Dunkirk. When our host said yesterday that today’s breakfast would be even better he sure wasn’t joking. Like yesterday it consisted of eggs, cheeses, ham, prosciutto, sweet pastries, croissants, a loaf of bread, yoghurt, there was a basket of condiments and the coup de grace, a bowl of cherries. Once again we were unable to eat it all.
Heading south from Gent we headed towards Oostende passing through lots of farming country. It’s interesting seeing the difference in the landscape between countries despite being so close. Belgium is so dry compared to The Netherlands with hardly a canal in sight. 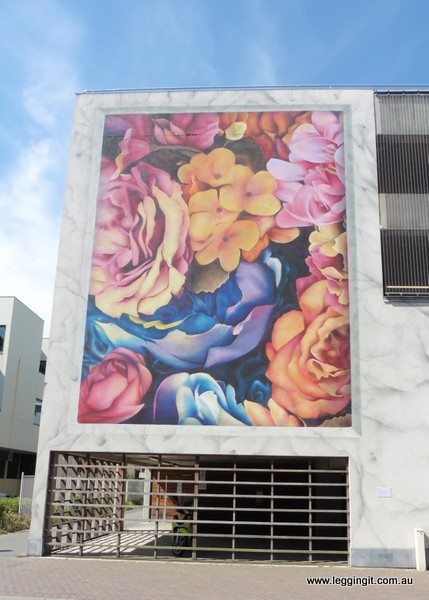 We were heading to Oostende for The Crystal Ship, the largest festival in Europe for art in public places. The art was from twenty Belgian and international artists spread throughout the city. At the Tourist Information we acquired a map which laid out all the sites. The map also had a cycle and walking trail which covered a 25 kilometre route. The route also included a ferry trip to an island to discover 3 art installations.
Michele had a bit of trouble with the map so I just put it on the tank and we were soon riding around the city. It was a bit like being on a rally trying to find all the different murals and art pieces. 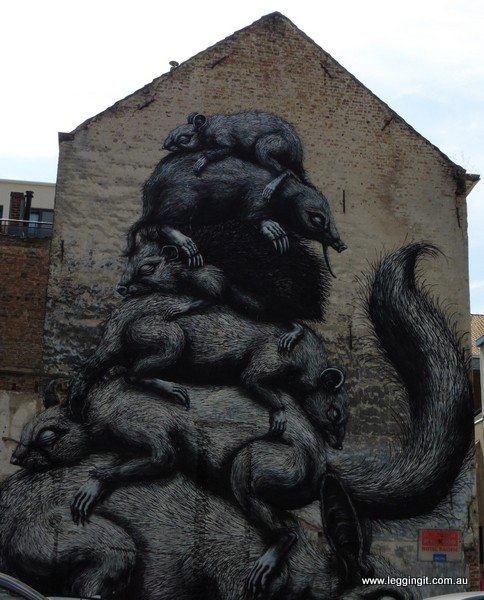 We recognised the artwork of Roa from an art installation in Perth. If you’ve ever been to Perth you’ll know about the giant Numbat. Well close to the city centre of Oostende he has painted a mural featuring a rabbit, squirrel, rat, hedgehog, mole and mouse all on top of each other. 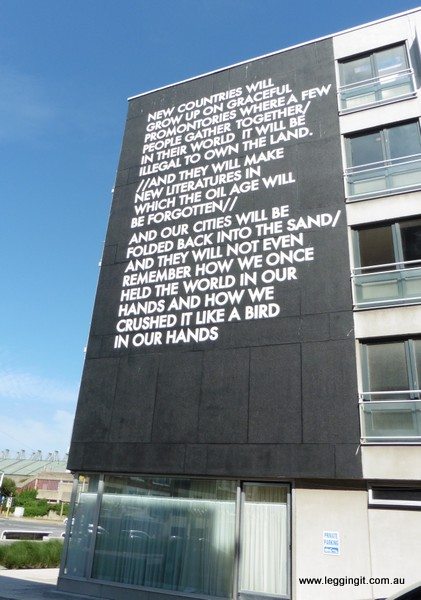 The Crystal Ship will be on display for roughly two years, you can either download the map  or collect it from the Tourist Office at Monacoplein 28400 Oostende
After seeing the majority of the artwork we decided to head south towards Nieuwpoorte. We’d heard that this part of the coastline is the Belgian Monte Carlo. However, after looking around we wondered whether anyone has actually ever visited Monte Carlo to compare the two. The marina is quite nice but the rest of it is just another sprawling beachside city which didn’t make us want to stop there.
The beach stretched along the coast for a long way and it was hard to tell where one town finished and the next started. Unfortunately the road didn’t hug the coast. As most of the beach fronts are converted to pedestrian areas we only got the occasional glimpses of the beaches between the tall apartment blocks. As it’s Belgian National Day today lots of people were out and about wearing red, yellow and black. There was also lots of flags flying. I guess that they didn’t get to fly their flag much during Euro 2016, so they’re making the most of it today.
As we crossed the border into France there was no flags or any huge sign welcoming us. There was just a simple sign which read “France” and the standard blue sign with the speed limits.

As usual the villages and towns of France didn’t disappoint as each roundabout was decorated with all sorts of flowers spilling from various layers of window boxes. It was just exquisite. The houses also had a distinct French feel about them with the style of architecture and window boxes.

After booking into the house in Dunkirk we went for a walk to find a supermarket. I wanted to take the bike but was outvoted and at one stage was contemplating going back to get it. However, after discovering we’d walked the long way, we also got to look around the city a bit. We discovered the Town Hall and a huge statue which was really cool.

Contemplating on the last eleven months since we’ve left England tomorrow will be the first English speaking country we’ve visited. The good thing is although we’ve struggled with all the different languages, (some more than others) we’ve never really been too worried. We’ve found that if you learn a few basic words like “Hello”,”Please” and “Thank you”locals will normally go out of their way to help you. Normally people who speak English quite well will apologise for their poor English (even though they are in their own country). One of the lessons we’ve learnt is that if you make an effort people will appreciate that and then treat you like family.