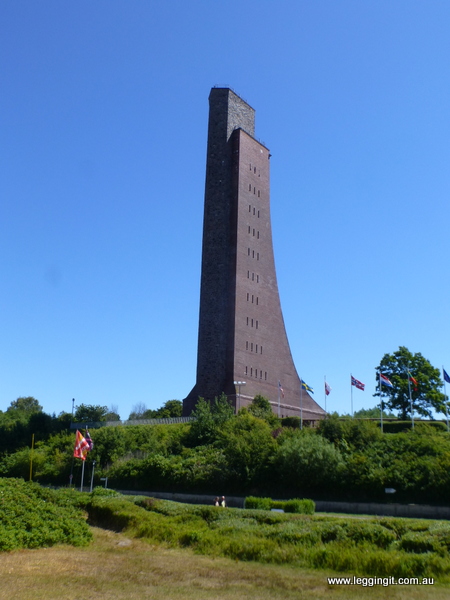 Whilst in Kiel we took a ride to Laboe, to the German Naval Memorial. The memorial is quite striking rising to a height of 85 metres above sea level, overlooking the beach below. The architect designed the building to resemble a flame reaching up into the heavens connecting the sea, land and sky. However most people think it looks a bit like a submarine conning tower and they wouldn’t be far wrong.

We took the lift almost to the top and there are further stairs to the very top of the monument. There are spectacular views from the top of the beaches and Kiel fjord. As it was the middle of Kiel week (Kiele Woche) there were hundreds of ships and boats sailing around the fjord. It’s also situated at the entrance to the North and Baltic seas there was lots of commercial shipping traffic as well.

Entering the memorial there’s a large room with silhouettes on two walls of all the ships lost during both world wars. The silhouettes are combined with a wave or ripple effect giving the impression of the sea. It’s quite powerful.

The next room is lined with ribbons from different countries and Naval associations, we even found an Australian one.

Beneath the memorial is a room of remembrance. There are two passageways leading to it and it’s circular with stained glass in the centre giving the room a dark and solemn, tomb like feel. This room is filled with wreaths and tributes from various countries.

At the rear of the monument there’s a room with some ship models of the famous German ship and lots of information on German war losses. There’s also a section on the current navy. There’s also biographies of four sailors from World War Two. The interesting thing for us was one of them was an Australian, Petty Officer Ronald Allan Heffernan MacDonald.
The commemorative screen for Petty Officer MacDonald was installed during the commemoration ceremony for those killed during the engagement between Australian cruiser SYDNEY and the German auxiliary cruiser KORMORAN. There was also a brass commemorative plaque installed for the two ships in the grounds surrounding the memorial.

The installations are proof of the German naval unions decision to make the monument an international memorial of peace and reconciliation.

Below the monument is the German WW2 Type VIIC Submarine. Which these days is a museum ship with an entry into the aft torpedo room and exit at the forward tubes. It was interesting to visit as it is similar inside to the old Oberon Class submarines. It’s well maintained and mounts a pair of Flak guns on platforms aft of the conning tower.
Her history is she was commissioned in 1943conducted 9 patrols and sunk 6ships. At the end of the war in 1945 she was in Norway where she surrendered to the British before being transferred to the Royal Norwegian Navy. She became the Norwegian submarine Kaura until 1965. She then was sold for the symbolic price of one Deutsche Mark to Germany where she became a museum ship at Laboe Naval Memorial in 1971.

Later we visited the little village of Laboe, a lovely beachside spot with beautiful
beaches covered in cane beach boxes. The day was hot and sunny so everyone was out enjoying the sun or swimming in Kiel Fjord. Meanwhile out in the fjord tall ships, yachts, old steam boats and sailing boats we flitting about.

Our couch surfing hosts met us at the wharf and we enjoyed a late lunch of fish at a local seafood restaurant. I ordered a local favourite which is raw herring fillets which is marinaded in an enzyme. The fish was soft but firm, almost like turkish delight, the texture was quite interesting. Locals either eat their fish marinaded in enzyme, vinegar or they fry it. It’s quite delicious.