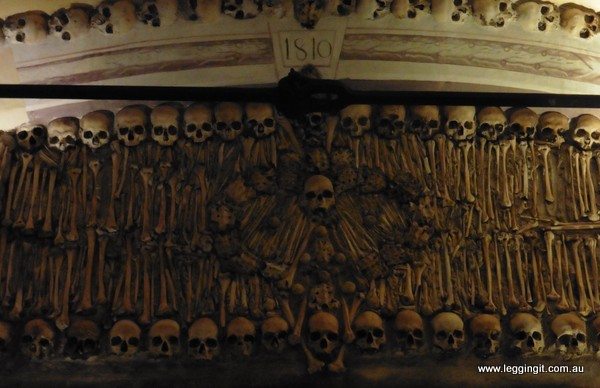 On the road to Lisbon we stopped off at the town of Évora, for breakfast and to visit the Chapel of Bones (Capela dos Ossos) inside the church of Saint Francis. Evora certainly isn’t the little village we were expecting but rather a small city. We expected to just drive along the road and see the chapel, this was not the case. After a lap of the city, we were none the wiser.

McDonalds which is every traveler’s savior, with its free wifi but it was closed can you believe it doesn’t open until 11 am (first world problem- where to get hash browns for breakfast?)

Even trying to establish which was the Main Street was hard as the old centre of the city still has all the cafe’s and the main roads passing through the city have no cafe’s.

Eventually Ron spotted a cafe near a service station near the hospital where we stopped for breakfast. It was a great little place with friendly staff who helped Ron understand toast or the difference between tostada (Spanish) and Torrada (Portuguese). One thing which is quite strange is the Portuguese butter their toast on both sides.
Whilst having our Torrada com queijo (cheese toastie) which was magnificent we spotted the spire of the church in amongst all the buildings and after breakfast headed towards it.

Sure enough it was Saint Francis’ Church (Ingreja de São Fransisco) and the signs pointed to the Chapel of Bones. The other great thing about motorcycles is the ability to just park them anywhere so we pulled up at the church and parked it on the footpath. The church is undergoing major refurbishment so not a square millimetre was visible under all the scaffolding and plastic sheeting but the chapel was open.

A sign above the door warns all who enter that life is short with the simple words of “Nós ossos que aqui estamos pelos vossos esperamos” or “We bones that are here, for yours await”. Yep it’s pretty creepy. 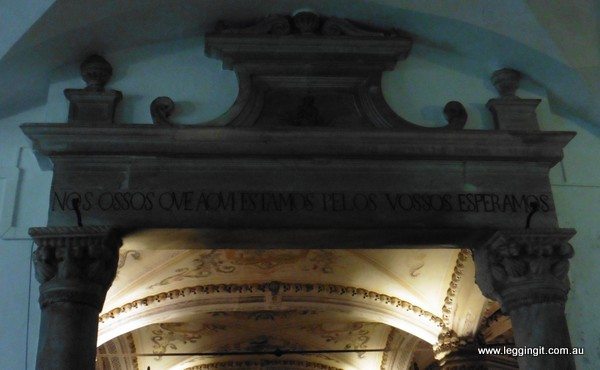 The chapel was built in the 16th century Franciscan monk from the bones of about 5,000 monks from the nearby graveyards to warn his fellow brothers to contemplate life as it was only transitory. 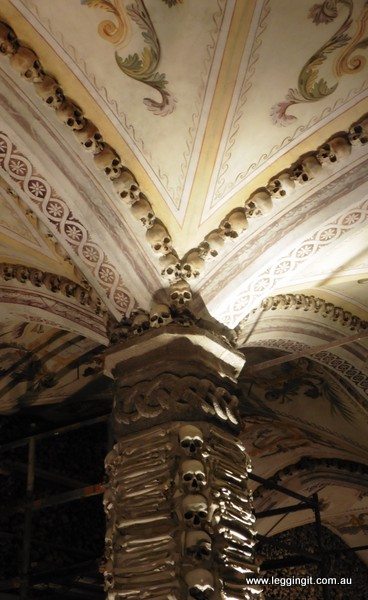 The walls and pillars of the chapel have been carefully built using skulls and bones held together with cement. There was refurbishments being undertaken here as well so the two dried out corpse which normally hang from the walls had been removed (thank goodness).Three small windows provide what little light there is in the chapel giving the feeling of being in a crypt deep in the bowels of a building. 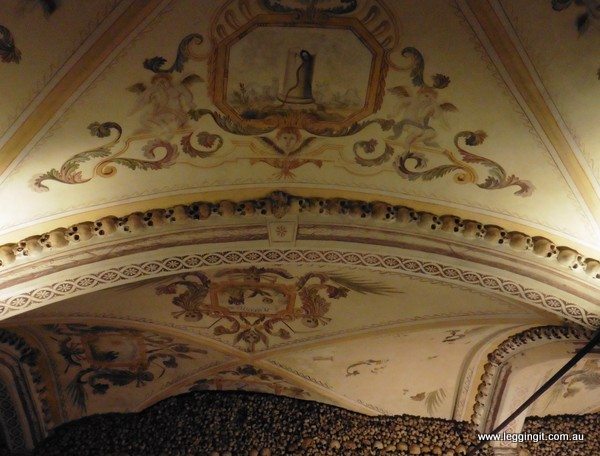 There were a few poems on small plaques which were attributed also to the early Franciscans also.

Where are you going in such a hurry traveler?
Stop … do not proceed;
You have no greater concern,
Than this one: that on which you focus your sight.
Recall how many have passed from this world,
Reflect on your similar end,
There is good reason to reflect
If only all did the same.
Ponder, you so influenced by fate,
Among the many concerns of the world,
So little do you reflect on death;
If by chance you glance at this place,
Stop … for the sake of your journey,
The more you pause, the further on your journey you will be.

The contemplation on the transience of life didn’t last long for three us loads of tourists arrived and the ghosts retreated back into the walls in a whirl of digital cameras, smart phones and iPads. As the hordes invaded the ghostly quiet of the chapel we slipped out and headed out of the city. 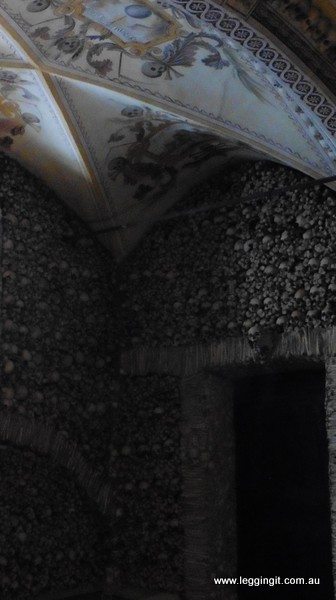 One thing about travelling by bike apart from enjoying the beautiful scents of spring wildflowers and the warmth of the sun on our faces but whenever we see something that sparks our interest, we have the flexibility to stop. We both saw a sign with a picture of a rock structure and thought lets check that out. 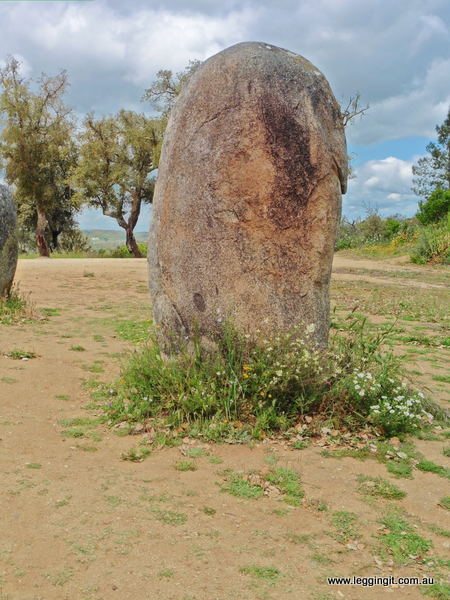 Near the town of Guadalupe is Almendres Cromlech a structure of 95 standing stones dating back to 6,000 BC. It’s quite amazing that on a few of the stones the carved designs are still visible after all this time exposed to the elements. Like all stone circles it’s believed that the stones were used for both ceremonies and astrology. What fascinated us was that the circle had groupings of stones, so a circle within the circle.

The stone circle wasn’t rediscovered until 1966 which in itself is quite amazing. Being up close to the standing stones there is a real aura about the place. They’re set in a clearing not on top, but close to the crest of a hill looking down on a valley below. The builders located them there for a reason, but we can only imagine what the place would’ve looked like 8 millennia ago. Not far away a Menhir (single standing stone) stands, it’s believed to have been used combined with the stone circle for predicting the winter solstice. It’s quite thought provoking after visiting standing stones on far away Orkney, the Outer Hebrides, Scotland, England, Wales, Ireland that 6,000 years ago these people were all connected with a little clearing in far away modern Portugal. 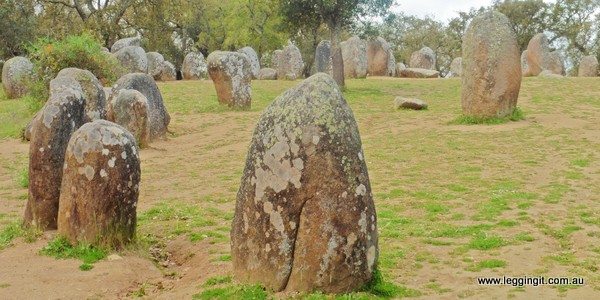 Unknown to us there are many Neolithic sites around the whole area and as we headed towards Lisbon we were barraged by signs pointing this way and that, if only we had more time to visit more.

Arriving in Lisbon the satnav navigated us into the centre of the city, which surprisingly was really hilly. To add to the complexity of trying to find our apartment was all the streets in the centre of the city are narrow and cobbled. Hills and narrow cobblestone roads now what could be worse? Trams or more correctly tram tracks. Yep we got the quadrella. Narrow cobbled streets lined with tram tracks on hills. It was pretty hair raising coming down some of the mossy streets dodging between tram tracks and trying to cross them at the best angle.

When we arrived at our street I got off and Ron rode through the bollard whilst I looked for the right number. We missed it on the first pass but with Ron riding the wrong way back up the hill we were soon at the right address.

After a great introduction by Sergio we had our bags in the room and feet up. Tomorrow we’ll explore Lisbon.

One thought on “Chapel of Bones and Stone Circles”