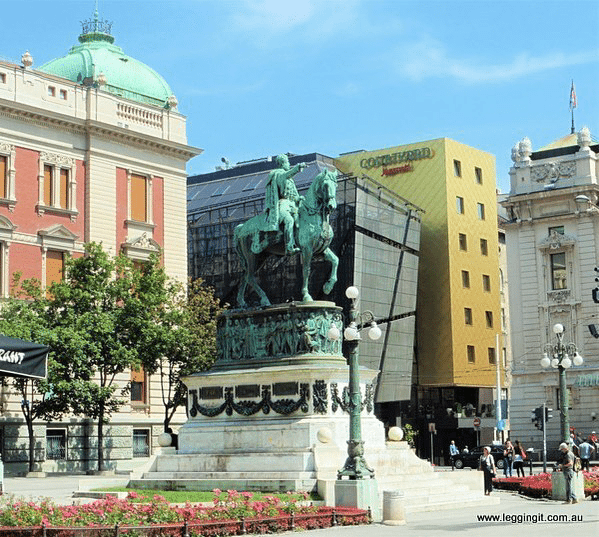 Today we took a walking tour around Belgrade, the capital and largest city of Serbia. We met up with our free walking tour guide at Republic Square at “the Horse” which is what the locals call it, it’s actually Prince Mihailo Obrenović the liberator of Serbia, riding a horse. 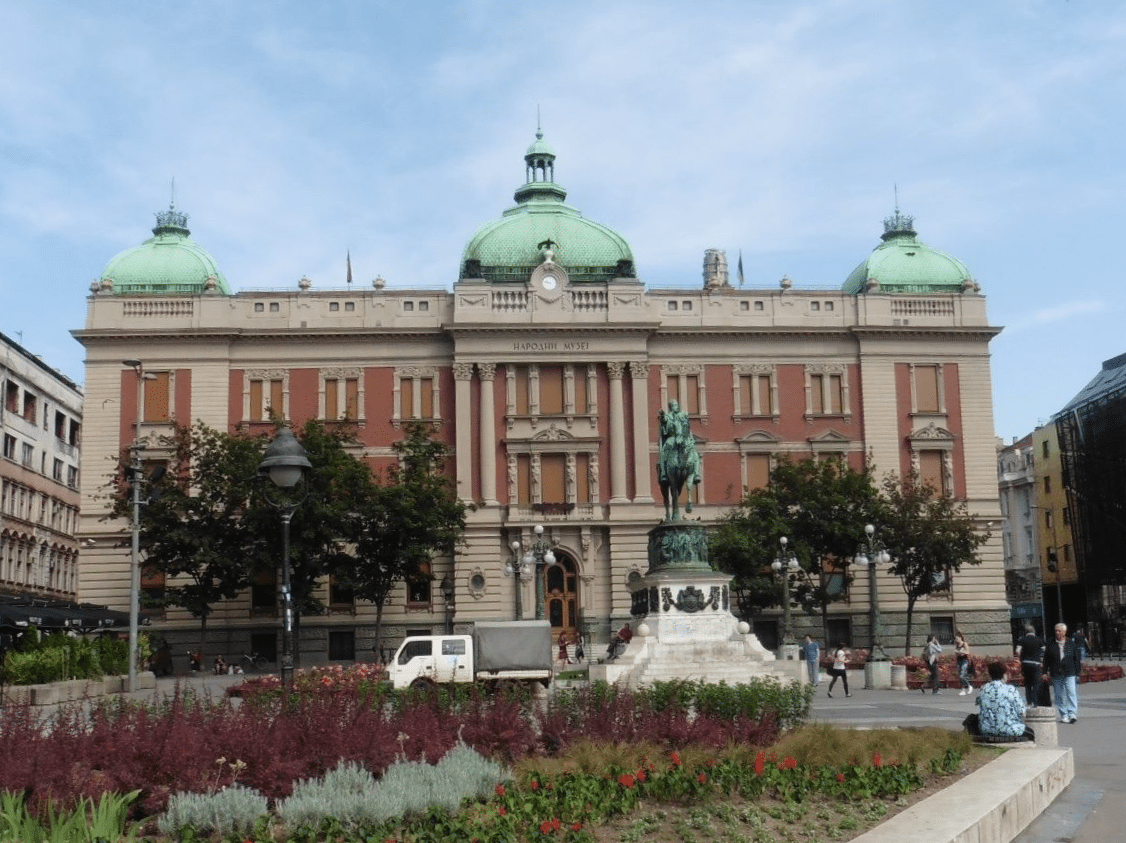 In 1860 after the death of his father, Prince Mihailo Obrenović regained the throne of Serbia. Over the next decade with the backing of Austria and Russia he negotiated the withdrawal of Ottoman troops from Serbia. He also negotiated treaties with Serbia’s Balkan neighbours.
With the withdrawal of the Ottomans the prince pulled down the outer defensive walls of the city and began the remodelling of the city, erasing everything Turkish. The prince didn’t get to enjoy his new reign for long for eight years later he was assassinated in Belgrade.

In the square behind the statue is the National Museum, a beautiful pink palatial building of Neo-renaissance and Neo-baroque style. The national museum was built on the site of one of the most famous tafernas of the time, “The Dardanelles”, where the cultural and artistic elite of the city gathered. It was also a place of revolution and conspiracy during the Ottoman reign. 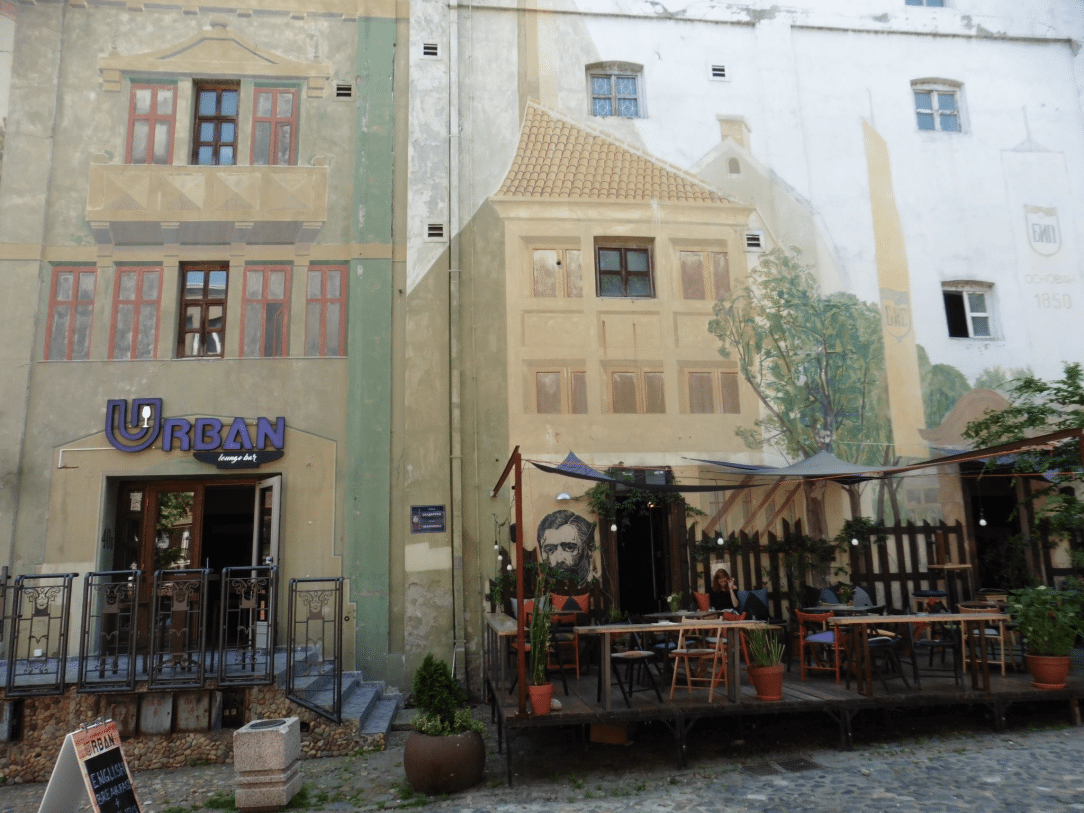 Leaving Republic Square one of our first stops was the area known as Skandarlija,  (also known as Skandarska Street) is the old bohemian section of the city . This is now the best place in Belgrade to find traditional Serbian food. In former years it was the home to artists, poets and writers who lived a bohemian lifestyle. Many would pay for meals and drinks with paintings, drawings, caricatures, and poems. A bronze statue to the most famous Serbian poet, writer and painter Dura Jakšić, sits outside his former home looking dishevelled in ragged clothes. His works have come to represent Serbian National spirit and his home has been restored as a museum. These days the old tafernas serve traditional S erbian dishes accompanied by traditional Serbian music. During our last trip to Belgrade we visited Tri šešira (three hats), Belgrades oldest and most famous restaurant. It has hosted kings, presidents and famous musicians. At night the old style street lights give the cobbled street of Skandarskja a really lovely old world feel. Along the street there are heaps of old cottages which have been converted to restaurants andtafernas.

Also in this street was the site of the first brewery of Belgrade, producing Aleksandar beer. The Bajloni family brewed their beer right up until 1945 on the premises drawing water from the underground well below the building. These days the brewery has closed and is a pretty artistic looking cafe.

Leaving Skandarskja Ulica we headed to an area known as Silicon Valley where we were told how Silicon Valley gained its name. Unlike Silicon Valley in the US which gained its name from the all the IT companies which it’s known for, the nickname Silicon Valley derives from the silicon breast implants of the pretty young things hanging off the arms of the post war gangsters who’d be hanging out at the cafe’s along the tree lined street. It was interesting hearing how in the post communist era designer labels became a status symbol. At one stage inflation was so bad that money would be worth half as much over a week period, sometimes even just 24 hours. The only choice people had was to spend everything as quickly as possible. Opportunists made a lot of money on the black market selling gasoline and essential products just by holding onto it for a short period. The newly rich were appearing in Silicon Valley dressed in Diesel brand, earning them the nickname Dieselers. The demand for Diesel brand and trying to fit into the Dieselers was such that people would remove the the Diesel tags off old clothes and sew them onto new clothes which weren’t Diesel brand but a whole lot cheaper. Serbian versions of Ali G would sit outside in the most visible parts of cafe’s just to be seen. To the ordinary locals just trying to get by the “Dieselers” became a running joke. We spotted a silicon enhanced pensioner yesterday climbing into a sports car who just looked out of place in modern Belgrade.

Walking through the city we passed the site of Belgrade’ s old Bajrakli mosque, built in 1575. It’s the only surviving mosque out of 273 which were built during the Ottoman occupation of Serbia. After the Ottomans left Belgrade all the other mosques were destroyed however Bajrakli was set aside for preservation. These days it’s surrounded by housing development as the suburb has grown up around it. 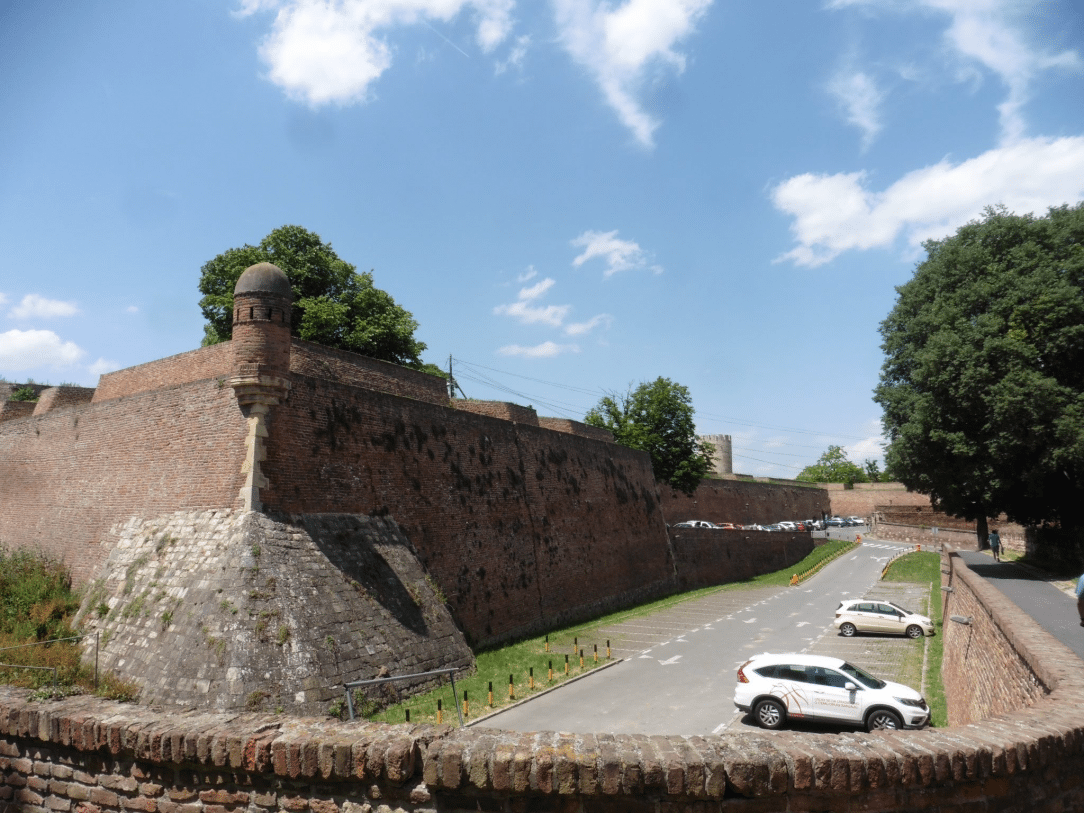 As the day was starting to heat up we arrived at Belgrade Fortress and Kalemegdan Park. The fortifications date back to roman times with evidence of the roman brickwork in the bass of the walls. The fortress was expanded and reinforced by successive empires, Bulgarians, Austrians and Ottomans.
The fortress is in the most strategic position overlooking the Sava and Danube rivers. These days it’s home to a military museum along with the Forestry and a few other museums. Kalemegdan Park extends beyond the inner walls with a light forest and walking paths. Along the main pathway vendors sell souvenirs and drinks from pushcarts.

From the walls of the fortress we had great views across the two rivers and the city beyond. The park is the home of “Victory” the Pobednik Monument. Victory stands on top of a 14 metre column looking out across the confluence of the Sava and Danube rivers. Serbia’s most famous sculptor Ivan Mestrovic, installed the sculpture in 1928 to commemorate the victory of the Serbian forces over the Ottomans and the Austro-Hungarian Empire. Originally the city had plans of installing a fountain however due to changing circumstances the column was installed. It caused outrage at the time as although he held a falcon in his left hand and a sword in his right, he actually wasn’t wearing any clothes. The sculptor didn’t even provide a fig leaf to cover his manhood. Prudish women were outraged, however sometimes the outrage was just a show.

One of our last stops was the Question Mark Kafana near the Cathedral. It’s Belgrades oldest traditional kafana dating back to 1823. It gained its name or lack of name when the owner tried to name it “By the Saborna Church kafana” because it was close to the Saborna Church. The name caused outrage in the Serbian Orthodox Church and to appease the church the owner painted a question mark on the door. Since then the kafana has been known as question mark kafana.
As we approached the main shopping mall on Ulica Kneza Mihaila we ended our tour. There were heaps of other tales we were told but we don’t want to share all the secrets of Belgrade.