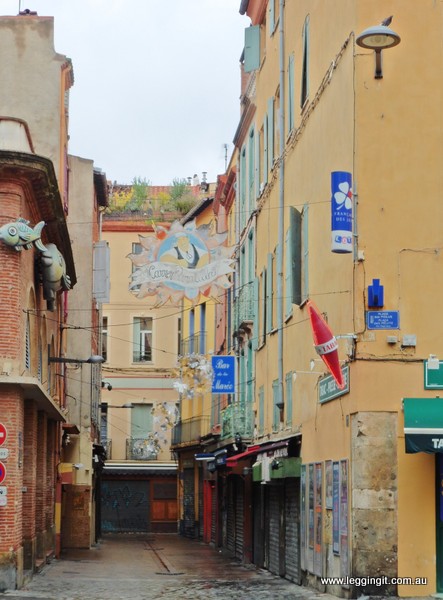 We spent a lovely few days in Perpignan, it is an interesting city which surrounds the Palace of the Kings of Mallorca. We were lucky enough to stay in the old quarter with lots of old buildings some which date back to the medieval period. There’s lots of tiny alleyways and little courtyards. It looks a is grubby in places, there’s a lot of unemployment, with guys sitting around in coffee shops but overall the locals were friendly and it’s safe enough to wander the streets without fear. It’s an interesting mix of people with French, Spanish, Catalan and Arabs which sort of reflect the origins of the city.

The Castillet marks the edge of the old city and was originally a city gate, when the city was walled. Later it was converted into a prison for a while. These days it’s a museum. It’s an eye catching red brick structure which gives the image of Beau Gueste and the foreign legion or for the cartoon fans Croc.

Not far away is the Basilique-Cathédrale de Saint-Jean-Baptiste de Perpignan. An interesting building built in the Catalan Gothic style in 1324, because of its association with the Kingdom of Majorca.

The façade is typically Spanish, featuring a portico and clock-tower, which date from the 18th century. Inside the cathedral is quite awe inspiring with about 14 separate alcoves with carved wooden scenes reaching from floor to the ceiling about 30 metres above. The workmanship in each panel has to be seen to be believed. Sadly of course in France the lights are not turned on so none of the photos were any good to share.

We also visited the Palais des Rois de Majorque, or in English the Palace of the Kings of Mallorca. The massive structure was not far from where were staying and it’s rather hard to miss. Its construction started in 1276 through until 1308 with the walls built from rock, bricks and mortar. The outer walls are a really imposing red brick structure which originally were covered in mortar and painted. There’s a moat and a draw bridge which separates the outer defences with the inner walls. There’s only one entry through a massive arch which leads inside up a number of ramps.

Up along the outer ramparts are art installations which are quite interesting. Some are of stone whilst others are brass.

The defensive structure is a huge star pattern with the front section housing the museum. The inner section of the palace is made from stone and mortar and has an interesting mix of Moorish arches and Catalan architecture. The tour of inner citadel starts above the shop and leads upstairs to the balcony which was the Kings throne room. On either end of the balcony are the kings rooms and the tower. There’s a great view over the city from the roof of the tower. These days the great hall along with all the accessible rooms house all sorts sorts of current artwork some good some very odd.

In the centre of the citadel is the chapels. They join the kings and Queen wings on either side with private access. The larger chapel at the top is of course the Kings with the Queens beneath. Quite interestingly around the wall in Arab script were bible verses. These days both chapels are undergoing renovations and it’ll be great to see them when they are finished.

After our wander through there we decided to walk around the exterior, it now has parks, bowling clubs and we also found that the rear of the fortress is being used by the French Foreign Legion. Through the gaps in the screening we could see palm trees lining the roadway, a bit like a foreign base somewhere. Outside on the roadway was a sign for recruitment and we could imagine back in the day someone on the run from the law slipping through the gates to join the legion where no questions were asked.

We then wandered home and spent the rest of the day watching movies thanks to Carl lending us a cord to connect to the TV.

2 thoughts on “Palace of the Kings of Mallorca”