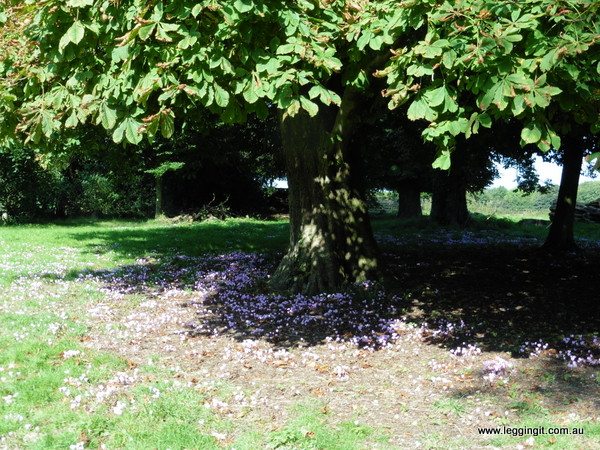 Today we caught up with a friend Lesley for a picnic at Newark House, a National Trust property about 45 km’s from Bath near the village of Ozleworth. It was a wonderful ride up from Bath passing through lots of rolling hills of sheep country before opening up to ploughed fields and farmers bailing hay.
A series of one lane roads led us to the entrance of the estate. The gates were pretty modest but entering the estate it had a nice welcoming feel as the road gently curved through a field of sheep grazing.

We met Lesley at the entry where we were given a lovely introduction to the house and gardens. As we entered the grounds we were pleasantly surprised by hundreds of flowers from bulbs beneath the trees. Keen to catch up with all of Lesley’s gossip we started our tour with coffee at the cafe on the lawn.

After coffee and a long chat it was time to check out Newark House and gardens. 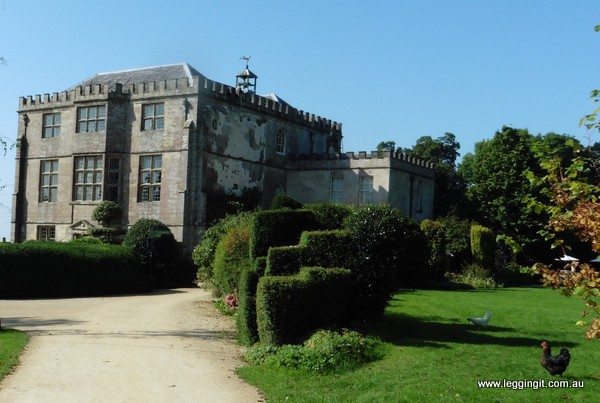 Newark or “New Worke” as it was originally known was built in 1550 as a hunting lodge, by Sir Nicholas Poyntz. It was a four storey Tudor building (three up one down) made from local stone with two reception rooms on the ground floor, a grand hall on the first floor and bedrooms on the upper floor. In the basement was the original kitchen. The woodlands around Newark were supposedly some of the best hunting grounds in the area. From the windows, gardens or on the flat roof the hunt could be watched at a distance.
In 1600 the building was sold to the Low family who later added another matching building with adjoining passage and stairway forming a ‘H’ shape.

In 1790 the house was transformed again when the Clutterbuck family employed architect James Wyatt to remove the central passage and build it into a square house. 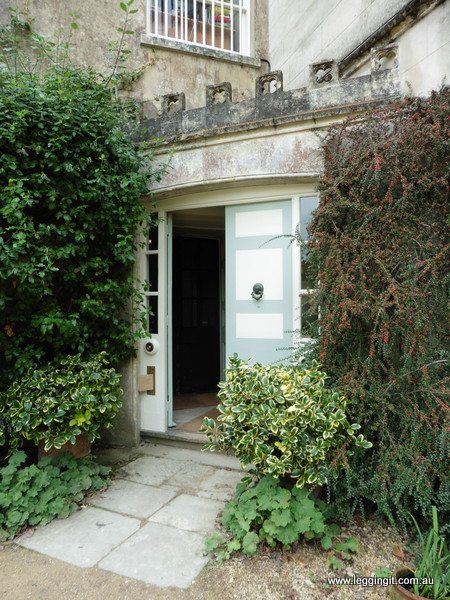 The house was leased in 1898 to Sally Anne Poole King a wealthy widow with five children. She also made some alterations such as, adding servants quarters, installing hot water and heating.
When the last of the Kings died the Clutterbuck family donated the house and 700 acre estate to the National Trust in 1949.

The National Trust managed the house as a tenancy which it served as a Nursing Home up until 1970 by which stage the gardens were overgrown and the house in poor condition. It was at this stage that American Architect Robert (Bob)Parsons took over the tenancy and began renovating the house. He also started renovation of the gardens.
It was due to the work of Robert (Bob) Parsons that Newark Park gained grade 1 listing. 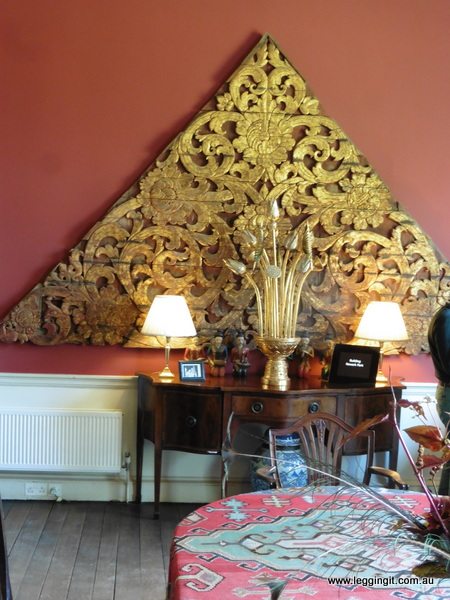 His work at renovating the house turned it from an estate unable to be shown to a lovely house open to the public.
Entering the house, we discovered newspaper like room guides lying on the tables inviting people to read them. It was quite fascinating. In the Dining room the guide compared menus from the different owners. In Nicholas Poyntz’s time they dined on red meat, swans, peacocks and very few vegetables. They impressed guests with sugar or marzipan based sweets. The Clutterbucks however dined on hashed hare, sheep’s head broth, pickled pork, or calfs feet jelly. Main meals were served with vegetables. Desert consisted of Plum pudding or apple dumplings.
In the 20th century Bob preferred home baked ham, Boston baked beans and lasagne whilst his mate Michael Claydon preferred fish pie, beef Wellington and roast meats.
There was also character profiles of the different people involved with the house. For instance Michael Claydon first visited the house one weekend in 1982 but went on to live there from 1983 until 2011. He was the driving force behind the restorations. Other cool facts include how the joists were so bad that whilst the house was a nursing home the floors were slanted but by the time Bob Parsons moved in the floors had collapsed. 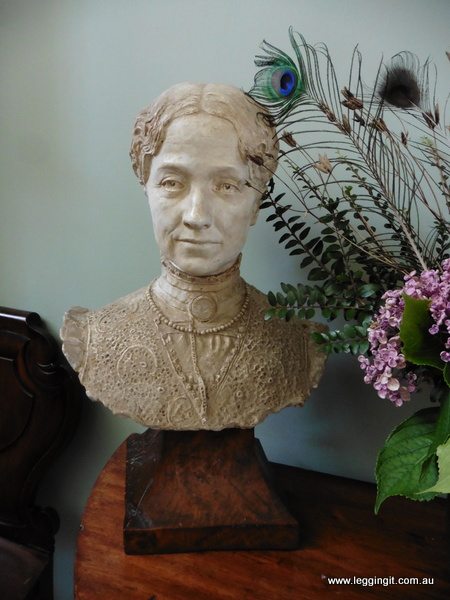 Throughout the house there were bits and pieces which could be traced to the various owners and periods of the houses life. On the upper landing tudor bay windows from the Poyntz’s are with stained glass fitted by Reverend Clutterbuck. On the ground floor a glass display case is filled with Staffordshire ceramics of the 1700 -1800’s reflecting the Clutterbucks period whilst next door a room decorated with Asian artefacts reflect Bob Parsons influence.
On the top floor there’s a number of rooms including a few bedrooms and a room converted to a second hand book library. One of the rooms is decorated in Georgian style with a beach hut style ceiling and an inflatable mirror. Another room features silhouettes of various members of the Clutterbuck family.

The other room on the upper floor is the long gallery which is used for displays. During our visit the British Woodcarvers Association had a display of coaster sized carvings commemorating the centenary of the First World War. There was also a display of wooden carvings of various objects from dragons to household items. It was quite fascinating.

During Bob Parsons tenancy he removed the lift installed by Mrs King. After she had it installed, everyday she had her chauffeur hoist her up at the end of the day. In the morning she would have him hoist her back down again. 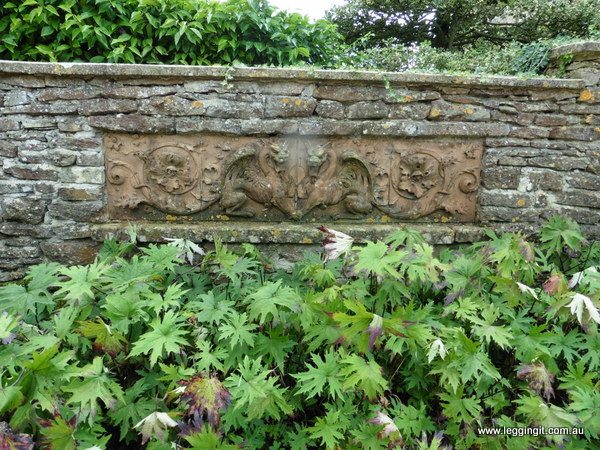 After visiting the house we found a table in the garden and enjoyed a lovely picnic lunch supplied by Lesley. It was just perfect. The lawns surrounding the house are home to a cafe and a croquet field which seemed quite popular with the families. 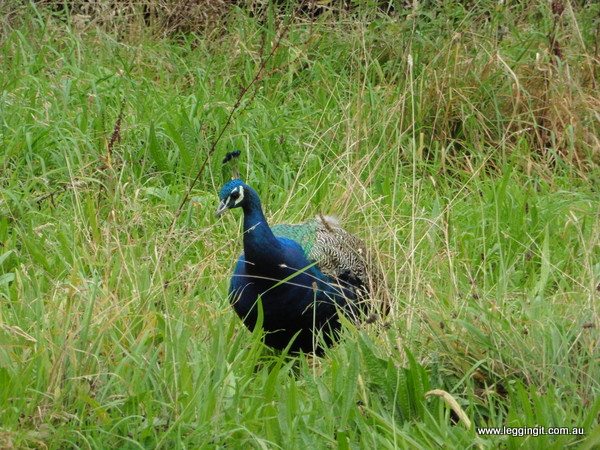 Whilst we ate enjoying the sun peacocks strutted around the grounds. 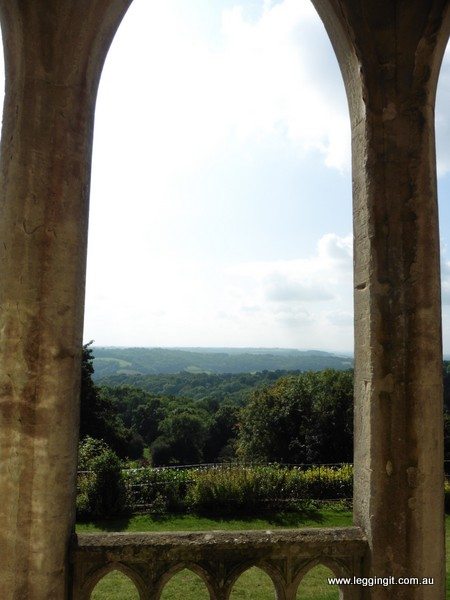 We took a walk through the gardens in front of the house and enjoyed the views from the terrace. Set at the top of a valley, Newark has great views across the Severn valley all the way to Severn Estuary. Strolling down through the forest we visited the Sham Castle. During the 18th century Sham Castles or Follies were all the rage. They were built to look like old castles or ruins to add a feature to gardens.

Due to work in the lower gardens we were unable to visit the crinkle crankle wall, lakeside gardens or summer house. The crinkle crankle wall piqued my interest as it was a term I hadn’t heard before. In fact it’s a wavy type wall also known as serpentine, similar in shape to corrugated iron. The feature of a crinkle crankle wall is that it uses less bricks than a conventional wall. Due to its shape it is quite stable and can be built using just one course of bricks without the use of buttresses to reinforce it.
When Bob Parsons renovated the gardens he found a few of the buildings which had been overgrown quite by mistake.

After a lovely day spent catching up with Lesley it was time to head for home.