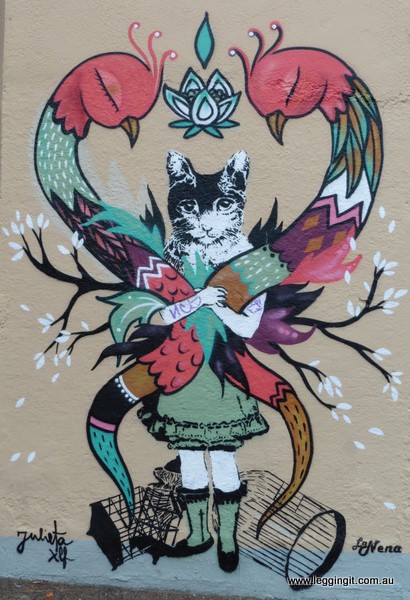 It was with heavy heart we climbed onto the bike and headed out of Toulouse to Perpignan. We felt like we were running off and deserting our friends after all they had been through.

The weather was really windy and we were blown around from the start of the trip all the way out of the city. The further south we travelled the more we noticed how different the countryside was with vineyards stretching as far as the eye could see over rolling hills. The churches had that flat Spanish style fronts, and avenues of pink leaved plane trees lined the roadway on either side of the towns. The weather continued to be a battle especially in the treeless areas, we even passed a restaurant aptly named the Wind. Passing through a little town spotted a little restaurant named “Le Idiot du Village” so we just had to stop. They were just closing but kept the place open just for us.

The waiter/owner told us the menu and we ordered soup followed by pork. When the entree arrived it was actually pieces of liver on a bed of lettuce. Ron was pretty happy with this however, ergh, I scraped mine onto his plate too. Thank god for the basket of bread.lol Next came a pot of rabbit pâté and another basket of bread. I didn’t hear him say Lapin and Ron upon hearing it, kept schtum so we happily ate it. He shared this little gem a bit later.

Next came a plate of cassoulet, a local Catalan dish of beans and pork. It was not as good as our friend Elisabeth’s in Tours but it was still ok. Finally dessert was a Catalan creme brûlée and a chocolate mousse with candied orange peel which was pretty interesting. All up €15 per person so not so bad.

The next part of our journey we diverted through the town of Ferrall and we wondered about the towns inhabitants. The countryside was quite sparce, and hilly with lots of rugged boulders, almost like the country in spaghetti westerns. The road wound through the hills and the further along we went the fog increased. Eventually we decided to leave the hills (that Chrissie our sat nav insisted on taking us) and head for the coast where there was no fog. The coastal road was pretty good fairly light for traffic until we arrived in Perpignan where we discovered that there was a festival on and there were cars everywhere.

Our apartment is in the old part of the city in an old formerly abandoned building run by an Australian guy, Carl and Yvan. They’ve done an amazing job to rebuild and transform the old building. When we arrived we parked the bike in his garage and then chatted away for ages, with him telling us all the places to visit during our stay.

Tomorrow we check out the old city.