The weather was pretty grubby this morning as we packed the bike. It’s only a short hop from Ioánnina to Igoumenitsa but first we plan to ride around Lake Ioánnina. Well at least after breakfast. A cafe next to a bakery was the perfect location. Pastries from the bakery and coffee from the cafe as they do not serve food. 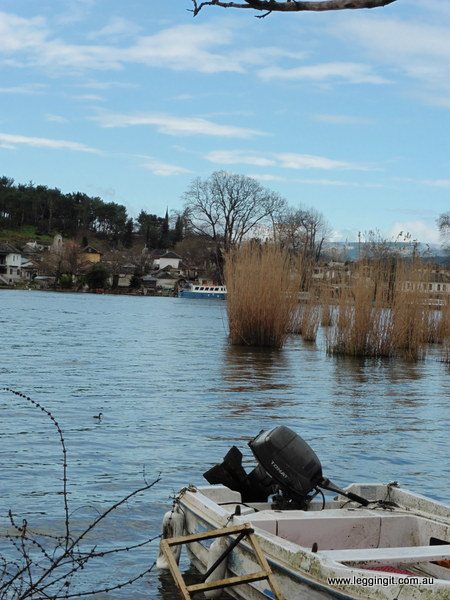 We headed out of the city and followed the road around the lake which had some great views across the lake. The silvery waters of the lake, due to the overcast skies, really contrasted with the rust colouring of giant rushes along the edge. Unfortunately the road didn’t stick close to the edge of the lake so after passing through the city we headed out from Ioánnina to Igoumenitsa.
The road from Ioannina to Igoumenitsa took us over hills covered in dense scrubby bush. A few farms had a little cleared land where vegetables were growing and a little pasture but mostly it was pretty meagre.

Passing through Vrosina I contemplated stopping after seeing a few cafes and restaurants but I was already through the town so I thought the next town I’ll stop. Heading out of Vrosina the road wound up through mountainous countryside where it started spitting rain. I was in a quandary whether to turn back or keep going hoping for another town or bar to appear. Of course as it started getting heavy there were no places to stop. We just pressed on and by the time we reached the top of the mountain, fog rolled in. It as slow going as we descended through the fog down a series of switchbacks.
Eventually we made it into Igoumenitsa and found a restaurant. The food was pretty ordinary and overpriced so we were a little nonplussed.

After another satnav blunder we eventually found our way to the hotel. Actually we saw the Hotel Olympic on another street below us and just worked out a smarter way to reach it. The hotel owner couldn’t have been nicer, welcoming us and offering to carry our bags. He soon delivered a tray with homemade red wine, olives and nuts as a welcome. It was such a lovely welcome. He delivered a number of books on the area, then made us park the bike under cover of the building and after hearing that we were travelling on to Paxos telephoned the ferry.
Soon all our wet bike gear was hanging off every available hook in the room. Tomorrow morning we head to the island of Paxos and the hotel owner has told us that he’ll call the ferry in the morning.