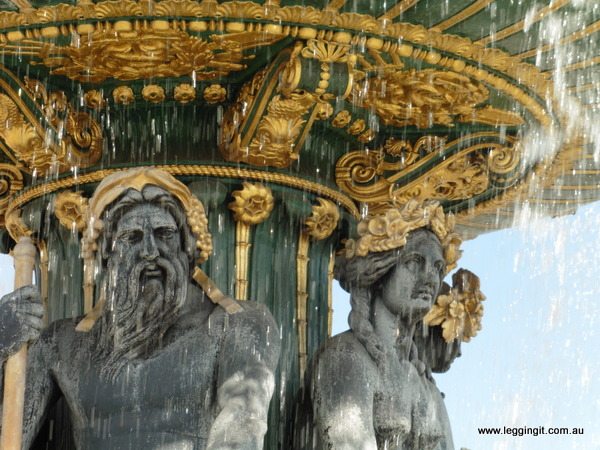 Well tonight we were telling Guillaume about our adventures in the city.  We designed our own walking tour…well really we just wandered and discovered Paris on foot, but it also gave us an opportunity to spot some of Paris’s scams in action…

After breakfast we caught the metro to a station near the Eiffel Tower. When we’re out on the bike and we see it we point it out to each other but you can’t come to Paris and not see it close up again. Travelling on the metro’s pretty cheap €1:80 or cheaper for a book of ten. 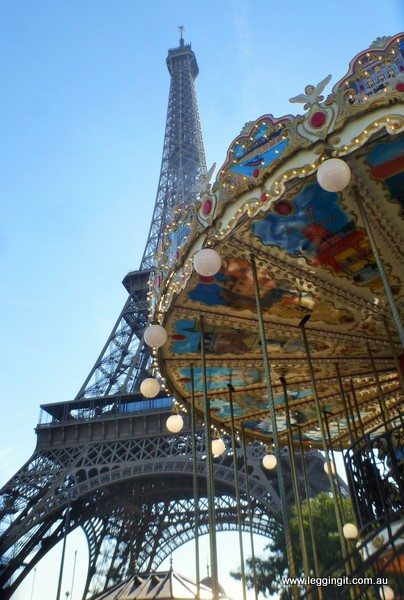 we just wandered and discovered Paris on foot
After arriving as we were heading towards the Tower we saw the Gendarmes in action. One on a bike stopped two blokes and in a curt manner with a lot of hand gestures told them to ” get their butts back over towards the tower”. As we walked closer to the tower the two blokes and another were talking to the Gendarme and his partner. Obviously one of the three blokes were having trouble hearing what the gendarme was telling him so the gendarme grabbed hold of the blokes ear to assist him. Usually the gendarmes are pretty relaxed so these three must have really upset them.

Walking up to the tower we passed brought the usual scam where someone wants you to sign a form to pledge money for deaf people. Usually in a group they approach you with a clipboard pointing for you to sign, obviously as they are ‘deaf’ they do not talk. If you fall for it and sign they then start demanding you pay them money- we saw a few people get caught in this one so be aware it is all over Paris. 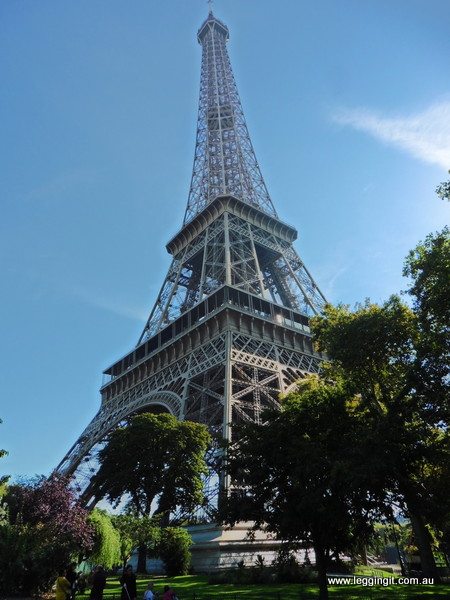 After a few photos we headed across the Seine and made our may towards the Champs-Élysées. Along the way we passed George Washington’s statue in Washington parade. It’s interesting how he has a connection with the UK, France and the USA.

As we approached the Arc de Triomphe de l’Étoile we met a nice man, a bit dishevelled, who had just found a thick gold mans ring on the pavement in front of us. He asked us if it belonged to us and looked around for the owner. He then showed us the stamp to prove it was gold. With a kiss on Michele’s hand he preceding to give it to her, “for luck” before kissing both of her cheeks. Then he started to kiss me, on the cheeks. As he walked away, he stopped and asked for money for coffee. Michele said she had no money, but he insisted. I had a few copper coins (about 20 cents) which I popped in his hand, which he was not impressed about. As he continued to complain that the money I’d given him wasn’t enough for a coffee I simply picked the “gold ring” off Michele’s palm and planted it amongst the coppers. “There you go mate that should be enough!” as we continued walking towards the Arc de Triomphe de l’Étoile . As we reached the corner the penny dropped for Michele “I heard about the gold ring scam online, and now I just remembered.” He was good I assume also if we had been wearing any jewelry it would have gone as he kissed us 🙁 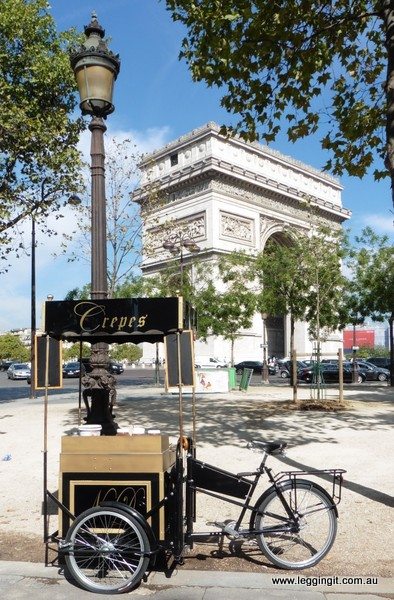 The weather was perfect as we watched the traffic roaring around the Arc de Triomphe with one hand on the wheel, the other on the horn. Strolling down the Champs-Élysées we decided it would be nice to have coffee overlooking the boulevard. After checking restaurants and cafe’s prices for coffee, (€5 for black coffee) we looked for a Slackers (McDonalds). Well Slack Macs was closed for renovations (how are backpackers going to check their messages and update their Facebook status). Luckily the Quick store was open (the French version of the Golden Arches) with equally slack burgers. So whilst punters sipped their €6 coffee at George’s we sat on the other side of the barrier enjoying the same view drinking our €1 coffee (although out of paper cups but don’t worry about the minor details) which was actually really good. 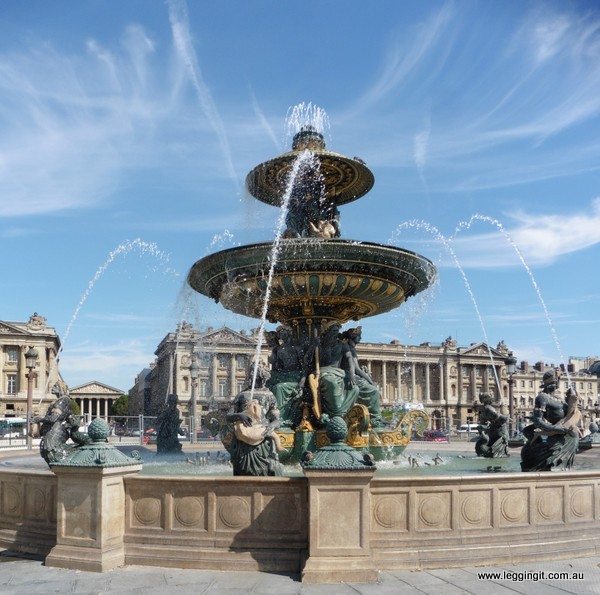 It was the perfect day for a walk so we continued walking through the gardens along the
Champs-Élysées and then onto the Place De La Concorde which has the Luxor obelisk brought back by Napoleon from Egypt. There’s two fountains nearby which are really ornate and really set off the square. After a photo stop we continued through Jardin Tuileries, an interesting space with trees planted in box shapes. There are fenced of grassed areas with sculptures, cafe’s, gardens, and water ponds surrounded by Parisians (and tourists) sitting in chairs soaking up the sun. No that’s not odd at all? A seat under a tree was the perfect place for a baguette and some l’eau gazeau which we had packed this morning.

Eventually we made our way though the park and past the Arc de Triomphe Du Carousel to the Louvre. It’s a great place in the daylight with Africans jangling hoops filled with Eiffel Tower key rings, and guys selling hats, sunglasses, water, and selfie sticks. Everything you need on a summers day. 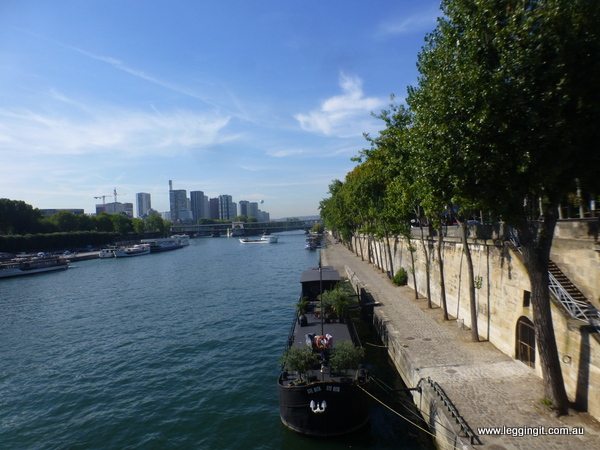 We crossed the Seine again and headed through St Germain to Le Jardins Du Luxembourg. It has another palatial building dating from the renaissance at the front of the estate which is beautiful however at the moment we’re chateau’d out so we only visited the gardens. 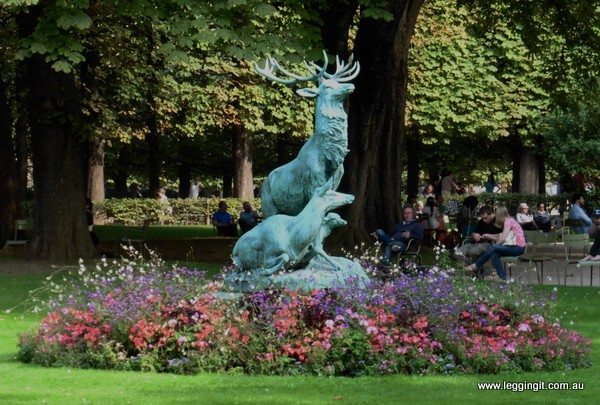 Once again they were magnificent with a lovely flower garden stretched out before the chateau and patches of lawn and stands of trees stretching out throughout the rest of the park. A coffee at the Pavillion De La Fontaine set us back €3:10 each so we dug our books out and sipped it slowly whilst a brass band played in the rotunda. As time was getting on we headed for the apartment passing Parisians on seats surrounding a patch of grass soaking up the last rays of the sun, or were they watching the grass? We will never know..

All the oldies were out playing Pétanque in the dusty courts. With a little flick of the wrist the silver balls rose in the air before landing and spinning towards the jack. It was all intense with stern faces watching every toss and calculating strategies as if they were playing for sheep stations.

Well that’s it for Paris tomorrow we pack the bike once again and head off with our destination Brittany to start our housesitting gig in a few days.

2 thoughts on “Paris On Foot – How to Spot Scams”