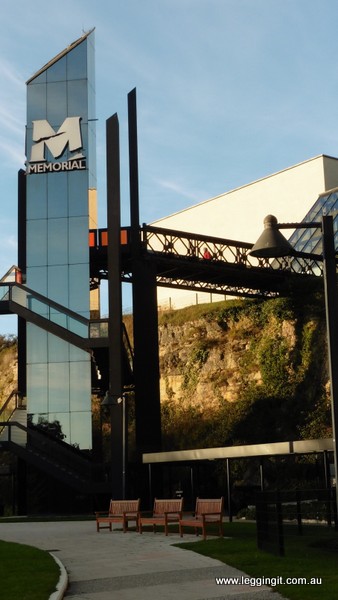 Today we visited Mémorial de Caen. It’s pretty hard to miss this memorial as there’s a massive statue of a sailor kissing a girl out in front of the building called Unconditional Surrender it’s double meaning does not get lost as you enter. The building dates from the 80’s but its had a huge upgrade so looks ultramodern inside

It currently has a number of permanent exhibitions The Second World War,   The D-Day landings and the Battle for Normandy., The Cold War and a few other exhibitions such as 100 items from the War. At the rear of the complex a lift connects with General Bunker and the three  Memorial Gardens of America, Canada and Great Britain.

We started our visit at the Second World War exhibition. The memorial  uses mixed media  in English, French and German to convey the different stories.  A timeline traces the events in the world whilst posters, video screens memorabilia set the scene. We also used an audio guide which was really well presented.

The first story begins, at the end of World War One and explains how the world was thinking at the time. It was sick of wars and desperately hanging onto peace. The exhibition walkway slowly spirals downwards around a globe, maybe signifying how the world had changed with the rise of the totalitarian governments in Russia, Germany, Italy and elsewhere. Maybe giving the impression of a world out of control being sucked down into hell. The end of the spiral signals the rise of the Nazi’s. A darkened corridor drags you down into a dark sphere with images of Nazi might, Hitlers voice, combined with the sound of jackboots symbolic of the  world being plunged into a void. It’s a great use of symbolism.

The story continues onto the dark days in France. The crushing defeat in 40 days by the Nazi Blitzkrieg and capitulation of the surprised nation. The subsequent carving up of the Nation under the armistice. Occupation, and collaboration under Marshall Pétain the saviour of a nation, head of the collaborating Vichy Government. Resistance and General De Gaulle’s call to arms, the reprisals and concentration camps. It was interesting seeing the two different leaders speeches to the nation. Marshall Pétain calling for collaboration and General De Gaulle calling for resistance. It’s hard to imagine living in a country occupied by a foreign power where the community is divided between collaboration and resistance. 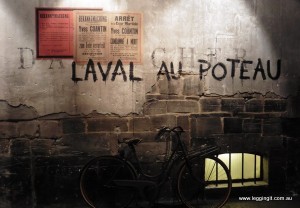 The memorial traces the change from a European war to a global war, with Italy and Germany invading Africa. Then Japanese invasion of China and Asia, the bombing of Pearl Harbour which lead to the American entry into the war.

There’s lots of confronting sections in the exhibition. Project T4, the euthanasia of the disabled which was subsequently applied to destruction of Jews in Europe. The Death camps, the deportations, the industrial disposal of Jews, Gypsies and undesirables. 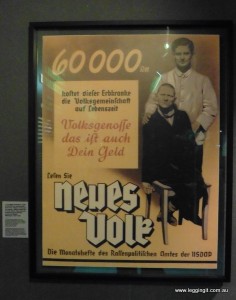 This poster tells readers the costs of caring for this man as a way of making the population justify whether his life is worth living or not.

The concept of total war where everyone was involved in the war effort and the battlefields were everyone’s home with the bombing of cities.
The final sections cover topics such as resistance and liberation, purges and reprisals, reconquest of the pacific, moral shock.

The defeat of Germany, the subsequent trials and the human toll end the exhibition. We arrived at the end totally drained, having just witnessed one of the best thought out exhibitions of its kind.

We had planned to continue on to the Battle of Normandy Section but decided that we needed to stop and take a break and absorb what we’d just witnessed.

The exhibition starts with the D-Day Landings, the airborne assault, the giant armada and covers what was happening at each of the landing beaches Utah, Omaha, Sword, Gold And Juno. It’s quite detailed going right into what each unit faced and what actions they took as the assault continued. It was fascinating seeing how the Battle for Normandy unfolded. A battle which was to only last a few weeks stretch out for 100 days. 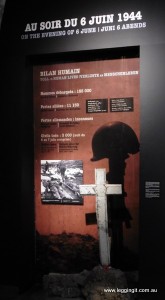 The Cold War exhibition was quite fascinating and thought provoking. The exhibition starts with parallel east and west sections with everyday objects which strangely enough were almost identical. Meanwhile in the background televisions are pumping out propaganda and counter-propaganda.

The exhibition traces the similarities between both systems. The witch hunts during the McCarthyist period, and the gulags. The anti war hippie movement and on the other side the anti-soviet protestors in Russia. Two two ideological sides on either side of the Korean and Vietnam conflict. A room full of pulleys and machine like parts sets the scene for escalation of Nuclear Hostilities film screens of the Cuban missile crisis, the shooting down of the U2 spy plane. Just when you think it can’t get any worse the realisation hits with  the small round cinema showing films taken by the armies of both sides during nuclear trials. It was heartbreaking to see those young men on both sides ducking down into foxholes as the atomic blast passed over them, then standing up and advancing. There were also the duck and cover films. The world really was mad.

Down in the basement a MIG-21 a real veteran of the Cold War(they were produced between 1959 and 1985) adds some teeth to the display, just coldly menacing. To balance this threat an American thermonuclear bomb, sits inertly in front of it on a trolley, with a French missile in its silo nearby.

Upstairs the reality of the Cold War is played out in the streets of Berlin as firstly the blockade is enforced and the airlift relives it. Fencing leads to the installation of the Berlin Wall, espionage, divided families, secret police, attempts at escape and catastrophic failure. Finally the collapse of the wall and the easing of the Cold War had us wiping our brows. It was so intense.

We moved on to the next exhibition called 100 Objects of the Battle of Normandy. It’s interesting with all sorts of objects and their stories. There’s a German Sidecar, soldiers helmets and the sad story attached to its former owner, a pair of Focke Wulf drop tanks which were converted into a fishing raft, a children’s billy cart made from a board and two wire reels, 100 different things all up. It’s quite fascinating reading all the stories attached. 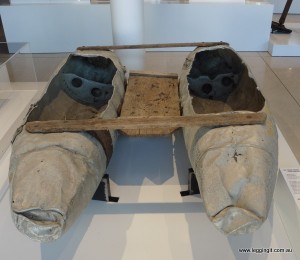 Upstairs we visited the Shots of War exhibition. It is a series of photos taken by soldier Tony Vaccaro of the American 83rd Infantry Battalion. His variety of photographs from action shots to the absolute horror of war is unbelievable. There’s even a short interview with him and he seems to be a humble person. 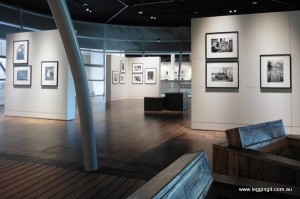 With all the interior exhibits visited we decided to take a quick look at General Richters Bunker which is accessed via the lift at the rear of the memorial. It’s quite amazing how long the bunker is and how it remained untouched. There’s lots of displays inside accompanied by the sounds of a control room.

The last part of our visit was to the gardens. At the rear of the Memorial are British, Canadian and American memorial gardens. After trying to absorb all the information it’s a great place to take a walk amongst the gardens and trees.

After spending the whole day at the Caen Memorial well actually just over six hours we would suggest to maybe split it up over two days because there’s so much information to take in and heaps to see.

It is definitely somewhere you should not miss if you are visiting the Normandy Landings area as it puts everything into perspective. The main message we walked away with was the importance of reconciliation and forgiveness.

Tomorrow I think we’ll cut back on the museums and just check out the 360 cinema at Arromanches and maybe Caen Castle.

Disclaimer: We did accept free entry to the Mémorial de Caen there was no agreement as to the content of our review.