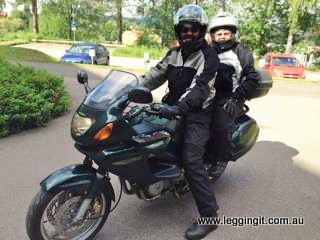 The time had come for us to be legging it again…After a week chilling near London, it was time to head to Portsmouth. After getting the bike ready we said our goodbyes to Mum and headed for our first popping in for a cuppa with some old friends in Hemel Hempstead. We’d been trying to get a hold of them the whole time we had been in the area. We spent a couple of hours catching up before we mounted up for the short ride to Portsmouth. The run down the motorway was pretty mind numbing with the buffeting wind blowing us and the bike around but Ron just kept going. As we were passing Guildford I decided we needed a break s signalled for him to take the next exit. I expected Guildford to be a little town but boy was I surprised and disappointed so I signalled Ron to keep going.

Eventually we stumbled across the Withies Inn at Compton. It’s an old inn dating back to the 15th century and just a little quirky. Inside it has low ceilings and is pretty old style. The barman were all dressed in white shirts with black bow ties which was a it of a novelty for us. We ordered a couple of hamburgers which turned out to be the best we had had for ages. We then discovered the All Blacks were playing England in a rugby test on TV so settled in to watch. The All Blacks won of course and I was most happy but whilst we were watching the game the weather caught up to us and by the time we left the pub not only was it wet it was also dark.

Our destination was only about 60 kilometres away but the rain hammered down and by the time we arrived we were pretty wet. We had some trouble finding our couch-surf in the pitch black and rode up and down the road, before calling our hosts. Finally we got off the bike and just asked directions from a local. Eventually we found the right house, (the next day it seemed so obvious, if only we’d arrived whilst it was still light) and after meeting Lizzy and Michael, our hosts settled down in front of the open fire to dry off. We enjoyed chatting, drinking tea and eating together until it was time to head to bed.