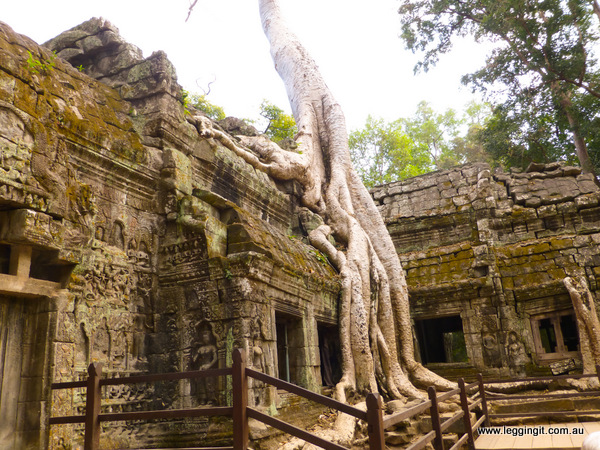 One thing we have noticed about Angkor Wat is the crowds.

We started the day late in Siem Reap with a bit of breakfast, blogging and pool and pretty soon it was midday.
Lunch was at the corner cafe again consisting of Bruschetta, fresh shrimp spring rolls, egg rolls, and deep fried eggplant with a lime and coconut smoothie to wash it down with.

At two o’clock we met Lucky for an afternoon tour of temples. Poor Lucky had not been well after he left us yesterday although he did look well rested. It was a long ride out and we passed a number of temples along the way but it was quite relaxing riding along watching people going about their daily life.

We arrived at Ta Som and were pleasantly surprised with the lack of people after yesterday. Ta Som is a nice small temple complex which has faces like Bayan and some interesting carved panels. In between each gate there’s people selling clothes, paintings, carvings and TShirts. We headed back along the road we came briefly stopping at Grandfather temple (an old temple made of sandstone and quite degraded)and the Changing Body temple where kings would come and as they moved between temples they would get younger (maybe we should plan on spending a day here lol)

Our next stop was Ta Prohm which is famous for the movie tomb raider. It was a long walk in from the road but the temple had some spectacular photo shots of massive trees which have grown around and through the temple like some alien beast. This is one temple where rebuilding work is underway and a dancing hall is being rebuilt maybe to accommodate the massive crowds. All the spectacular photo shots are in the central area so there were heaps of tour groups all muscling each other to get the perfect spot for the perfect shot. I got a bit impatient of all the Chinese and Japanese tourists who’d almost set up camp at one spot so I just barged my way through and pulled my best Chopper pose for the camera, which impressed Michele and a few of Japanese who took my photo as well. The Japanese girls were still smiling and commenting when I saw them later.

The crowds were too much for Michele who decided to bail, but I found the back 2/3 area of the temple complex was virtually deserted so I wandered around there for a while before meeting up with Michele and making our way back to the Tuk Tuk. On the way we passed a land mine victim band of which sadly to say there’s a few around here. They play beautiful Khmer music and give a glimpse of what it may have been like back when the Temples were active. Unfortunately there are heaps of land mine victims throughout Cambodia and they find all sorts of ways to get on with their lives either by begging, selling things or playing in bands. We saw a beggar the day before pushing a freshly collected note into a large wad of dollars before resuming begging with an empty hat. Yet our Tuk Tuk driver is on a salary of USD $60, works long hours chasing fares and hardly gets home to his family so it’s hard to work out who’s better off.

We asked Lucky to take us to a quieter temple and he showed us a little temple which was in quite good repair although it had props holding the walls up, acro props holding the roof up, wire and steel bands around the roof to stop them from blowing out wards. This was an interesting temple as it had canals connecting to it and as you walked into it it had decorative Naga’s and Khmer Lion statues. As we entered there was a Buddha dressed in gold finery with an old lady with a shaved head which was quite serene and it was a temple which seemed to go on and on with doorway after door way and every time you looked there was another doorway. There were lots of carved scenes on the walls and pillars and of course the spirituality of this temple had over come some people and they’d stacked rocks, not as great structures like the original builders but in simple forms but in the words of a great thinker “a pile of rocks ceases to be a pile of rocks the moment a single person contemplates it” hmmmm I’ll leave you to contemplate that.

As we walked through the adjoining temple we met a young girl of about 8 who was asking where we from in Italian, then switched to Spanish then English. We told her we were Australians so of course she said “Gidday Mate”. She asked me what the rings in my ears were called, earrings of course, then what rings around arms, and fingers etc. She was really bright and quick with language and hopefully she’ll have the opportunity to put her intelligence to use and not be stuck selling TShirts and souvenirs.

We left the temple and had the long ride back to the city passing through rice paddies with people trying to catch fish with throw nets, people herding brahma cattle on motorbikes, and as we entered the outskirts of town school kids on bikes rode past us as well.

Back at the hotel we made plans for tomorrow with Lucky before picking up our freshly washed clothes and cooling off in the pool and purchasing some fly spray to kill all the Mosquitos inhabiting our room. There has been an outbreak of Dengue fever so we decided to lessen our chances.

We ventured a bit further for tea and found a French cafe called Le Plait de Coeur which had a nice selection of French and Khmer meals. Michele selected a Parisienne Bagette and I a House Hamburger and both meals came with a fresh salad and Pomme Fittes and were very tasty. Paired with tea made from fresh ginger and lemongrass and at a price of $11.50 US you really couldn’t complain.

We wandered back to the hotel and tried skyping our daughter but no matter what we did it was not to be. By this stage the Mosquitos had driven Michele mad and she made the mistake of going back to the room where I’d just sprayed enough fly spray to gas Siem Reap and when I returned she was coughing badly and cursing my name. We slept soundly however, without the buzzing of Mosquitos or the scratching at bites however Michele’s coughing was a bit annoying. 🙂 Ron

2 thoughts on “Crowds at Angkor Wat”