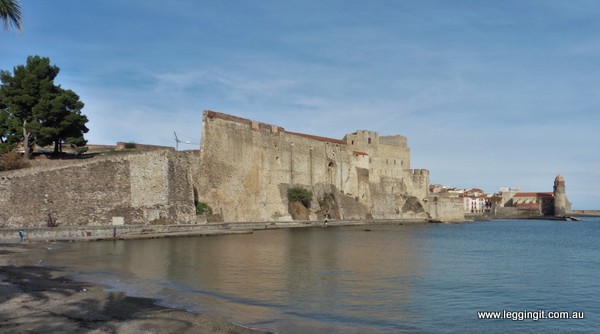 Despite being up early before we knew it, the clock read nine o’clock and we were still chatting to Carl. We really enjoyed our stay as the location was quite central without being crazy, the room was new, well planned with cooking facilities, and at the price a steal. It was a shame for us to leave, we even thought about extending our stay to visit a few more locations not far away.

As we headed south we followed the coast to Collioure. It’s one of those places where as you come over the hill you get a glimpse of the town below, the houses lining the hillsides with their terracotta roofs, just beautiful.

As we walked around Michele kept saying ‘this is the place I dreamed about’. It was so beautiful, the water so blue, coffee table right up to the water…..just as in her dreams.

A castle lines one side of the harbour which is the home of the French commandos. It was interesting whilst reading the sign which said that the commando school toughens the officers up to see an officer in commando uniform sitting in a coffee shop across the road on his iphone, looking anything but tough.

All around the harbour are lots of cafe’s, restaurants, shops and art related shops. It’d be another great place in summer which would go off. Out near the breakwater is an old church which is quite picturesque and inside it is stunning. All the alcoves have ornately carved wooden scenes reaching all he way to the ceiling. The most striking of all is the one behind the altar with the carving reaching all the way to the ceiling and then curving out as if they had to squeeze it in there. It was all gilded and once we paid the euro to turn the lights on it was spectacular.

We stopped for lunch at one of the many restaurants lining he harbour and enjoyed a Catalan meal of big chunks of veal, mushrooms, and carrots in a casserole. It was really tasty.

Avoiding the freeway we retraced our route a bit which took us inland and through the hills. Off on the far away mountains we could see the snow. Ö It was a nice ride through the lovely windy roads with the trucks whizzing past far above on the motorway.

Passing into Spain was pretty disheartening and depressing. We were really excited but in the first town we entered as we crossed the border we were confronted with prostitutes on the side of the road, in dusty laybys, in parking bays. It was really sad. I think we both thought about the economic crisis of Spain and how it affects people in different ways. As winter is fast approaching all the seasonal work has now finished so jobs are hard to come by and a lot more competitive.

The mountainous border area gave way to flatlands of rich red clay ringed by far off mountains, fields of olives, pig farms and industrial estates. It seems there’s been a lot of investment due to cheap labour prices and judging by the trucks on the border a lot of goods are heading north.

Arriving in L’Escala we decided to check out the town. The towns normally home to 10,000 people but in winter there must be only about 500 if that. L’Escala is on the Costa Brava and is a tourist destination with lots of resorts, hotels and summer houses. Riding through it nearly every house has the shutters closed, it’s like being in some Indy horror flick where the town is deserted but when the sun goes down the zombies come out.

We found a restaurant which was glad for our business and enjoyed a coffee overlooking the marina. A really flash restaurant with good coffee cheaper than anywhere in France, loving Spain already.

After a quick look at some of the town we found the resort and checked in. It’s also a ghost resort with maybe 4 rooms rented, although we are yet to see anyone.

Definitely barring the doors tonight to keep the zombies out.lol

Tomorrow we’ll take a break for the bike and take a walk around town.