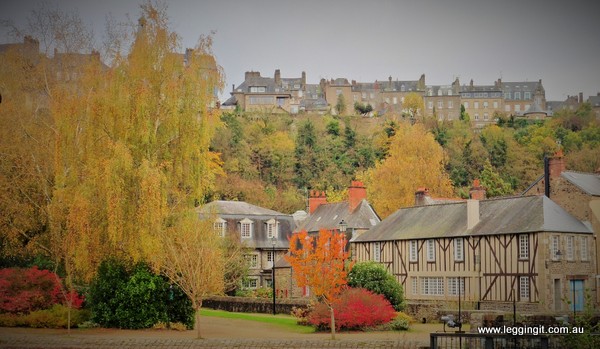 This morning we said goodbye to Normandy as we headed into Brittany. Not far from Mont-Saint-Michel is Fougères, which the guide book describes as a largely industrial town with a great castle and flamboyant gothic church. We decided this may be worth a look and we were pleasantly surprised. Chateau De Fougères is right in the heart of the town and proudly boasts that it is the largest fortress in Europe.

The entry fee was €8 each which included an audioguide and a guidebook so not tto expensive.
Also they had a pretty cool activities for kids. All along the childrens trail the kids audio guide characters Mélusa and Mélusin tell the kids about knights, fighting in armour and the medieval castle. They give clues to the questions on the puzzle books located throughout the castle. To unlock the puzzle books the kids must insert the key into hole corresponding with the right answer. Inside are the pictures and answers. It looked like great fun so of course Ron had to try :-).

Another fun kids activity were ten helmets around the castle which have pictures in the visor of daily life in the castle. They are attached to spears and are adjustable in height. The kids (big ones included) just adjust the height and place their face into the helmet, lift the visor to see the picture in the attached lens.

Just on 1230 a voice was calling “Sil vous plait, Sil vous Plait… Le chateau est ferme” the castle is closing? Ah we forgot, in winter many places have lunch breaks. It actually said it on the opening hours but it was no problem. All around the Chateau are little cafe’s and restaurants nearly all are selling crepes and galettes so we just picked one at random. Ron ordered a historique Galette (potato pancake, melted cheese, onions, mustard, sausage and saussison) and I ordered a Kebab (kebab meat, cheese in a potato pancake)

To finish off we ordered a coffee and crepe each, Ron’s plain with sugar and I the Speculoos(crushed Speculoos biscuits with Speculoos paste) For the people who’ve never tasted Speculoos, it’s a biscuit which tastes a little gingery.

Just before 2pm the Chateau reopened and we continued our tour. It was quite interesting learning the history of Brittany and how until the 15th century it was a separate country to France. The Duchy of Brittany had forts all along its frontier and fought many battles with the English and French invaders.

After our visit we took a walk around the walls and down to Saint-Supice Church. The church is quite amazing being built over roughly 400 years starting in 1380and with additions up until 1760.

The exterior of the church has some really nice carved spires and some stylised gargoyles. The churches interior has a vaulted wooden ceiling and wooden panelling covers the walls around the choir. The church is one of the three church’s, home of the cult of Notre-Dame-des-Marais. The statue of Notre-Dame-des-Marais,(the Virgin Mary with Child) has been worshipped since the eleventh century but disappeared after the Castle of Fougeres was invaded by Henry II in 1166. It was unearthed during the reconstruction of the church, at the turn of the fourteenth centuries. There’s a stained glass window in the choir which shows the statue being dug up. The faithful pray to the statue for help and guidance much like the Black Madonna. The statue of Saint Supice Severus, the man who the church is named after, is actually on the main altar.

There was also a tomb which contains the bones of St. Viviane , martyr of the catacombs of Rome and soaked land of blood were donated to the church of St. Sulpice by Pope Pius IX in the nineteenth century. The tomb is topped with a wax figurine in a glass casket lying on feather pillows and dressed like she is just sleeping hauntingly beautiful.

We found the interior of the church to be really quirky and it’s amazing the craftsmanship involved. Sadly French churches are quite dark so the photos do not do it justice. 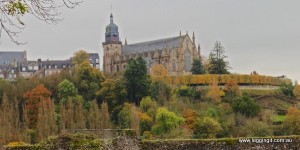 We then headed towards Le Mans bypassing main roads which took us through lots of beautiful little villages. It’s interesting how the trees are at a different stage of the season to the trees in Normandy. The trees still have heaps of gold, brown and red leaves. There were heaps of farms, cows grazing on pasture, fields of canola in full bloom, corn stubble and seed corn standing in the fields, potatoes, spring onions.

As we rode into Le Mans we were surprised how modern it looked with modern trams and buildings. We checked into the Mister Bed motel which was quite reasonable at €35 per night plus breakfast.

Tomorrow we check out older parts of Le Mans and the Motor Museum.