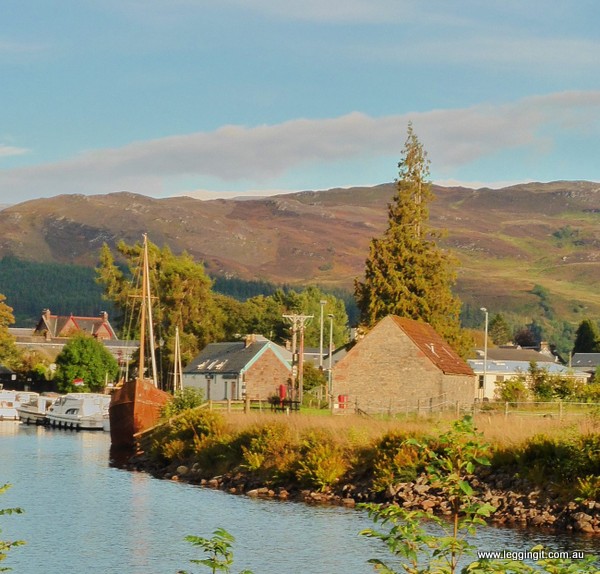 Today we headed north and started looking for Nessy.

What a cracking ride from Perth up to Inverness. We stopped off at Dunkeld on the way to check out The Beatrix Potter Garden. The well known children’s author holidayed at Dunkeld as a child and loved the place. The garden is full of all the characters from the children’s stories.

The traffic was quite heavy on the way across with caravans, campers and Winnebagos slowing the traffic and causing it to bank up. The best part about riding a motorcycle, all that instant power, a twist of the wrist and they go from in front of you to in your rear view mirror.

The countryside was amazing. Leaving Perth we travelled through rolling foothills covered in a patchwork of golden hay, green pastures, and brown cultivated fields. The fields gave way to forests before we struck the Cairngorms. It was like a big threatening wall, with grey menacing clouds and a little light rain. The mountains were like an uneven patchwork of exposed rock, heather, fern, pasture. The weather was absolutely freezing crossing the mountains. Then suddenly once we crossed the mountains and into the valley the sun was out and we were treated to the highlands in all it’s glory.

We were staying out in a little village outside of Inverness so after meeting our host and dropping our bags, we were off for a ride around Loch Ness. First stop was Dores Inn for a late lunch of Haddock, chips and mushy peas. I dunno why everyone has mushy peas, with pies yes, but with fish no. The view was magnificent looking down Loch Ness. It seemed everyone was out enjoying the sun as the pub was heaving. There were heaps of bikes and a heap of old mini’s as well out for a run. 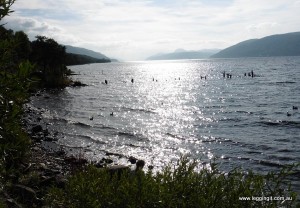 Our Ride Around Loch to Inverness

The ride around the Loch was amazing, with forests on one side and the loch on the other. The road was mostly one lane with passing spots so there was no slacking off, mind on the job, but the traffic was pretty light.

We stopped of at Fowers to have a walk along the Loch. It was pretty cool the water was crystal clear and freezing. We met Brooke and Harley’s families out on the point at the creek mouth who’d come up from Edinburgh. They were out enjoying the lake cooking snags over an open fire, with their drinks chilling in the lake. We chatted and discovered they were staying at the nearby caravan park in a wigwam, (how cool) and had come down to the lake to fish, cook and just enjoy the surroundings. Young Harvey the six year old was busy asking questions like who was our favourite football team, where we were from, when are we leaving. I reckon in years to come he may become Scotland Yards chief investigator lol

One thing about the people we’ve met in Scotland they’re all so friendly. We said goodbyes and headed off. 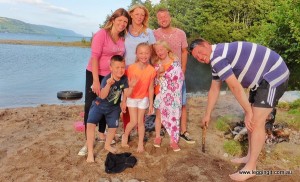 At the top of the loch we were stopped as a boat made its way through the swing bridge and into the Locks. Loch Ness is part of the Caledonean Canal which runs for 60 miles from Inverness to Corpach near Fort William, though four Lochs with one third of the canal man made. The lochs are at different heights so to pass from one to the other boats have to be lifted or lowered by using the Locks, which are either flooded or pumped full of water. Quite ingenious really.

The ride from Fort Augustus to Inverness was good fun, and although the road surface was pretty rough in lots of places, the curves and view made up for it. As we headed back over the hills to our accommodation the sun was setting bathing the sky in large swathes of pinks, reds. A truly magnificent scene.

Tomorrow we explore a bit more of Inverness. Also if you’re wondering whether we saw Nessy or not, well we saw something in the lake. Maybe it was Nessy and maybe it wasn’t? Sadly the photo was no good.