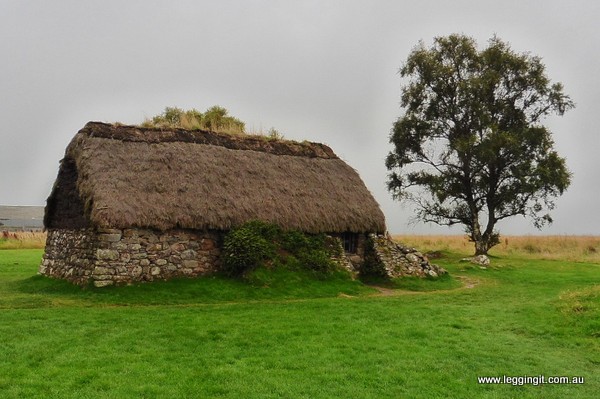 Our experience in Inverness and the Culloden Battlefield Memorial

No trip to Inverness is complete without a trip to the Culloden Battlefield Memorial Project and visitor centre. Today saw us leggingit there for a visit and best of all as it was a Scottish National Trust site, which we recently became members of, we got in for free.

The centre staff were absolutely brilliant, so friendly and helpful pointing us in the right direction and storing our motorcycle jackets. As the interactive section were about to have a display we started our visit there.

John, one of the guides, was dressed in typical highland dress and discussed highland dress, clan organisation including the persuasive techniques to get you to fight for the clan. He also talked about Jacobite weapons and tactics. 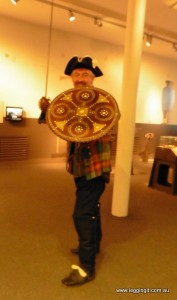 Two volunteers were selected and of course Ron was one. He was selected to be a tackman (a middle man) armed with a flintlock rifle, the other guy was a peasant armed with targe, dirk and basket sword. It was interesting as John and the other volunteer rushed across the room, Targe and Dirk in one hand and basket sword in the other, in a highland charge. 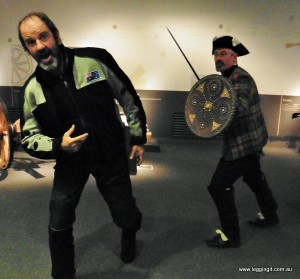 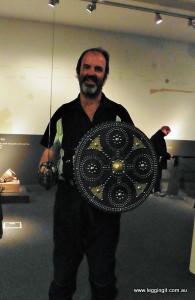 We returned to the beginning of the exhibition and went through.
The exhibition is quite well set up along a timeline with the opposing forces on different sides of the corridor giving a perspective of both sides of the Jacobite uprising. It gave the background and what lead to the Jacobite uprising. It traced the battles down through England, why they retreated back to Scotland, the defeat at Culloden and the escape of Bonny Prince Charlie. A long darkened corridor with audio voices gives the impression of what it was like for the Jacobites who on the night before the battle of Culloden walked about 12 miles to try and catch the government forces asleep and then marched back to Culloden.

There’s a theatre room with screens on each wall which gives a panoramic view of the battle field with a slow build up of the opposing forces, then finally the battle with cannons crashing, bullets flying and people dieing it’s almost like being there.
In the last room theres heaps of artefacts. There’s some found on the battlefield and others which have been collected, like rifles, dirks, and pistols. Just before the exit to the battlefield a screen on the floor gives a birds eye view of how the battle unfolded.

We caught the second show and this time John was dressed as a Redcoat. He described the conditions of being in the Government army He gained two volunteers by giving them each a shilling which back in the old days was one of the ways the Army recruited. He went on to tell us the other recruiting methods of the English army. Criminals were given the choice prison or Army, some people enlisted, while others woke up in the Army for the next 25 years and sporting a fine hangover.
The pay was 8 pence of which the Army gave you a uniform on hire purchase for 2pence, food and lodging for 2 pence, and a weapon on HP for 2 pence. Not much left out of the wage but 2 pence could buy about 20 beers so its not all doom and gloom. The government forces included 13 Scottish Clans so it wasn’t just England against Scotland. John went on to discuss the governments weapons and tactics. It was great to hear both sides of the battle 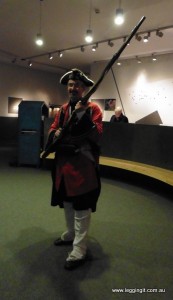 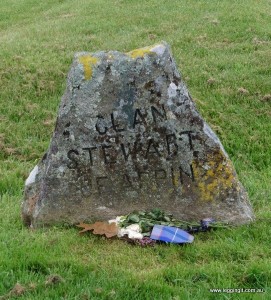 These days the mass graves of the different clans are marked with engraved stone markers, (which were placed by the land owner over a century ago) He also raised a cairn to those who were killed. 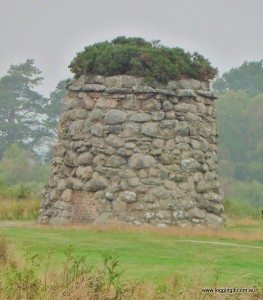 The weather being quite misty almost gave the impression of what the battlefield would’ve been like, however we were told that it was icy, with sleet, low vegetation and the ground was boggy with a temperature of 1 or2. The Jacobites had marched 12 miles and back in the dark in abysmal weather, and would have been hungry as they had trouble with re supply of food. It was almost like a footy team after winning so many battles without a loss they went down big time at home. After so many losses the government troops had learnt from the highland charge and had adjusted their tactics. 1500 Jacobites were either killed or bayoneted where they lay injured earning the Duke of Cumberland the title “Butcher of Cumberland”, but only about 50 government soldiers were officially listed as killed however its been since reported it may have been 250 (either way it was pretty low). Afterwards there was a fierce crackdown where Jacobites, sympathisers, men, women and children were executed, houses burnt as the pacification commenced.

Overall it was a great exhibition and we really enjoyed our visit. As the weather was closing in we decided to call it a day and headed back to the B&B.