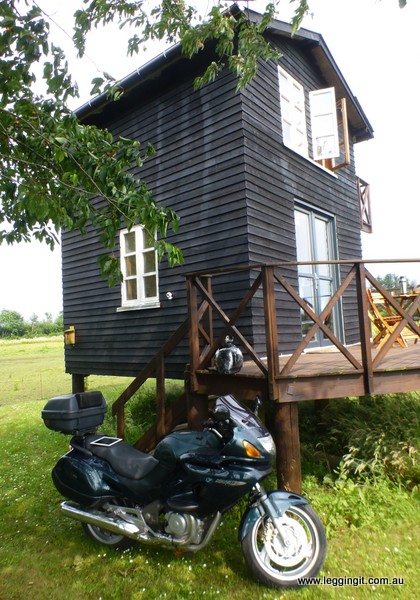 Off to a late start for our ferry trip from Gothenburg to Fredrikshaven as the 12 o’clock ferry, the Jutlandia, broke down. We were lucky our friend onboard called to tell us the news as we were then able to call and book onto the 4pm ferry before other passengers knew of the cancellation.

The weather was overcast with the occasional shower on the trip into Gothenburg but we were able to make it onto the ferry. We rode up onto the ferry and were directed to a back corner where we waited for the crew to lash the bike down. Eventually we gave up and lashed it down ourselves, we have since discovered this is normal and this is so they take no responsibility if your bike is damaged.

The boat seemed to be full of full of people buying alcohol to take home as there were little trolleys stacked high with beer being wheeled around. The crossing took three hours and despite the foul weather it wasn’t very rough.

Arriving in Fredrikshaven it was fairly simple unloading we waited until all the vehicles were off our deck before heading down the ramp and off towards Skagen.

We were staying in a little two storey cottage on a farm in the countryside about 30 minutes from Skagen. It was a nice setup concealed from the main house by trees with a balcony at the front, a table and chairs overlooking fields. Inside was a small room with dining table, chairs and a lounge. Up a ladder was the bedroom with another balcony. We shared the toilets, and the large common area which had a kitchen, TV, WIFI etc in the main house. The owners had a 1935 BMW sidecar and another old BMW which were in mint condition. They were really nice people quite warm and friendly. As we arrived quite late we headed off to find a cafe but eventually had to just buy some groceries and eat at home.

As it was really late we decided to skip the first day of the Skagen festival but we’ll be up early tomorrow.