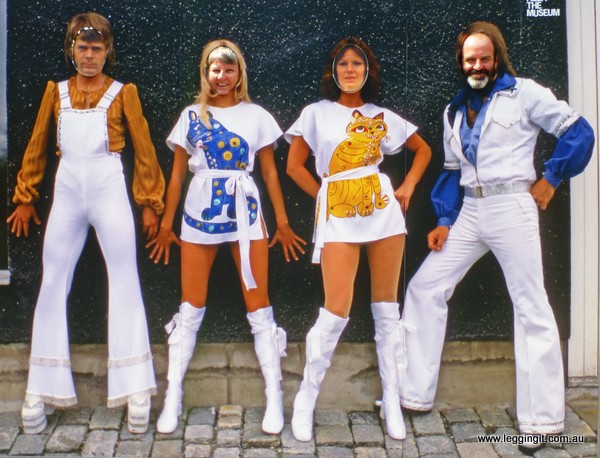 Today we visited the ABBA Museum and Michele is just a little bit excited. After breakfast and a chat with our Airbnb host, we were off to catch the train. We’d decided to use public transport and bought a three day pass which allowed us to use buses, trains, trams and ferries. It cost 20 SEK for the swipe card and a further 230 SEK for three days. We caught the metro to Slussen and walked the short distance to the ferry terminal where the ferry leaves for the island of Djurgärden. From there it was a short walk up two streets and turn left to find the ABBA Museum on the left. We had seen there was a Couchsurfing meet up for the museum so met up with a young German girl who was visiting. Entry to the Museum is about 175 SEK ($35) and the cheapest way is to book online and pick up the tickets by punching the code into the ticket machines. There’s a coat room on the first level down, luckily we didn’t have our bike gear because the lockers were quite small, but there’s heaps of lockable hanging space for coats. The first part of the museum deals with the four singers early days with bits about their childhood before moving on to their first singing groups. There’s the old Volvo wagon that Bjorn and the Hootenanny Singers travelled around in and the GMC Truck that Benny and the Hep Stars used. The museum then traced the bands rise to success with recreations of their managers office, their recording studio, and part of the cottage overlooking the water where they’d go to write songs. All the signs were in Swedish and English and there was an audioguide which had more than enough information on it. Throughout the museum they had heaps of interactive activities where you could record yourself singing songs, dancing like ABBA, quizzes and heaps more. Everything was uploaded to the Museum Website where you just punch in the code off your ticket and you can download it. Of course we joined in the three of us dancing like Dancing Queens, and the girls singing like “Divas”. The Gold Room contained all the gold records and all the stage outfits that they wore. It was a trip down memory lane looking at the Catsuits the girls wore, and the Original costumes from the Ring, Ring video. It was amazing that some of the costumes looked so intricate on TV yet were so simple. There was a disco dance floor for all the Dancing Queens to get the last of their Mama Mia fix before they returned to the street. There was also a Swedish Music Hall of fame which traced Swedish Music through the years which was quite interesting. Exiting through the gift shop was pretty hard as there were all sorts of ABBA souvenirs, music and gifts on sale. A great place and well worth the visit even for a slightly interested ABBA fan. More information here

Whilst we were on the island our Couchsurfing friend told us about a great cafe in the grounds of Slot. It was a bit of a walk and we could’ve caught the tram some of the way but it was a beautiful day. Along the way are heaps of old two storey houses which are quite beautiful. 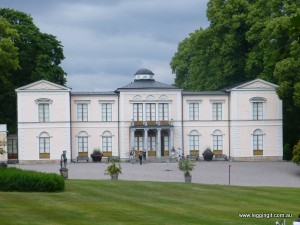 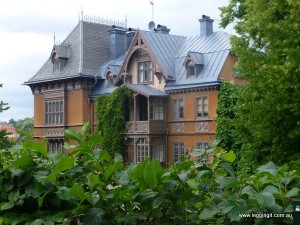 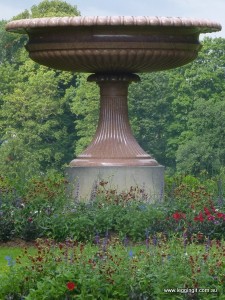 The old gardens have been transformed into a restaurant and cafe area. There’s a restaurant in the gardens adjacent the green house and cafes in the orchard and remaining green house. We chose the cafe in the old orchard and sat at a table beneath apple trees laden with young fruit, it was heavenly. 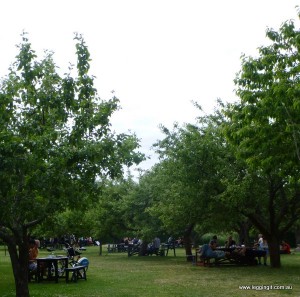 After lunch we walked through the grounds passing the old Slot and past the Nature Museumand the entrance to It’s a folk museum set on 72 acres with old houses from all over Sweden and it traces Swedish history with people dressed in period costume. As we had visited the Danish one, which was similar we decided to skip it. We headed for the Vasa Museum, which contains the Vasa, a Swedish warship from the 1600’s. The Vasa sank on its maiden voyage and lay on the bottom until it was salvaged in the 1960’s. The museum is the most popular attraction in Stockholm so unfortunately the crowds were insane. We decided to skip it and hopefully during the week it will be more accessible. 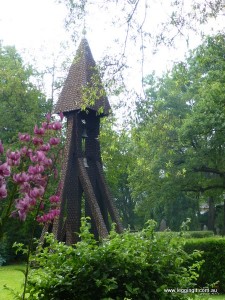 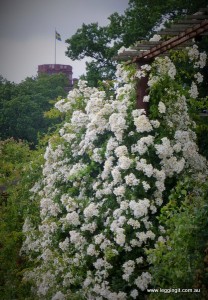 > Heading back into the city we watched a guy playing a small guitar pumping out some really cool sounds. We grabbed a coffee and people watched for a while watching a Romany woman dressed a little like a living statue in a white wig shaking a cup in peoples faces harassing people for money. She was pretty insistent and as we watched she approached kids shaking their hands before demanding money. Later the whole group of different beggars which we’d passed all converged on the steps of the train station, it must have been quitting time.

There was a Free walking Tour had a tour of the old city so we decided to join them for a look around. The tour is quite popular and pretty soon we had enough for two groups. After introductions we walked down to the old town area. The tour took us through the cobbled streets with stops along the way to tell us some of the history of the area. The town square which ran red with the blood of 82 nobles beheaded by the Danes, Hell street built over a grave yard where executioners with no ears lived, the museum containing all the blood stained clothing of different historic figures, and the site where Count Axel von Fersen was beaten to death by an angry lynch mob. There was a Viking Ruinic stone, heaps of old buildings and of course the street where ABBA lived. The tour was fun and informative, with all sorts of funny and gruesome tales, we even met a girl from Rocko not far from where we live (who’d have thought). The tour ended overlooking the beautiful harbour not far from Slussen station where we said our goodbyes and caught the metro home.

Tomorrow night we catch up with a Couchsurfing friend who we’ve travelled all this way to see.