The ferry from Bilbao to Portsmouth actually doesn’t leave from Bilbao itself but the port lies between Bilbao and Satandar. We took a detour into Bilbao to check out the flowery dog outside of the Guggenheim Museum. With visions of this 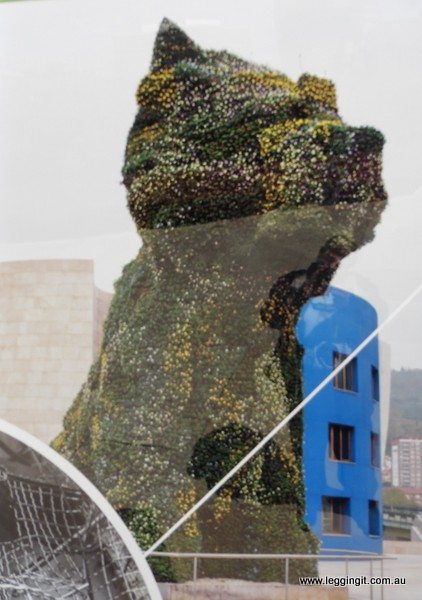 When we arrived we found the dog covered in scaffolding and shade cloth and surrounded by plants in preparation for planting. So disapointing…. 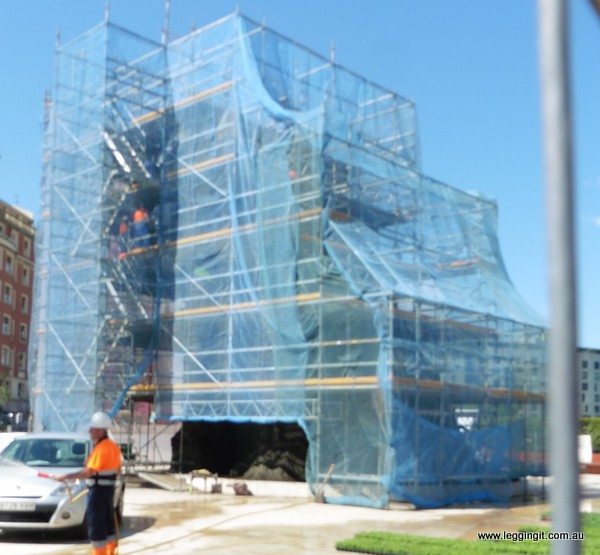 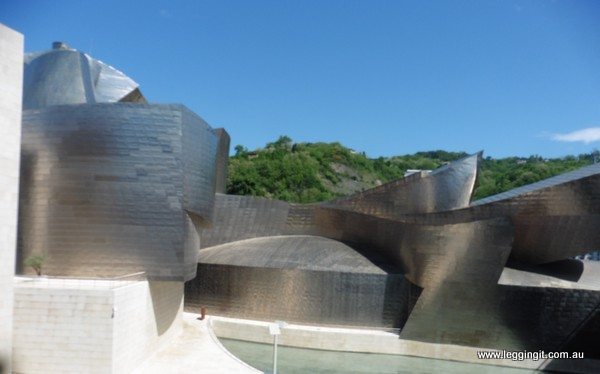 After being in this amazing futuristic part of the city we headed for the port. Sadly futuristic stops at the Guggenheim as the road network is a nightmare. On one roundabout we stopped three times so I could only imagine what it would be like at peak hour.

Once on the road out of Bilbao to Santandar we spotted the yellow signs to the port which was easy enough to follow. Arriving at the port we were amazed at the amount of bikes, there had to be at least fifty of all types. There were lots of groups of riders from different bike clubs and just friends. Most had taken 8-10 days off to travel to Jerez for the Spanish Moto GP. It was interesting

On the ferry we caught up with a few of the different groups and it was interesting finding out where they came from and where they had travelled to. All the groups were different from each other, there was a big group of mates from Doncaster who’d come down for the race and had a great time on a lads adventure. They were roaring drunk on the ferry, we pityed them riding for 4hours in the rain nursing the remains of a hangover. There was Ken and a bike group from Wales consisting of guys of all ages and experience who had gone on their first big trip. There were another group from Manchester, a technophobe, a speed demon and a gadget man who were just good blokes. It was great hearing their stories, where they’d ridden, what they’d experienced.There were a few others we chatted to including a really nice bloke who had owned a Deauville, we chatted for hours with him.

The ferry was a bit like a cruise ship with a swimming pool which not even the guys from the north ventured into brrr chilly, there was bingo, all the shops, restaurants which charged an arm and a leg, bars and a cinema.
One thing which amazed us was the ferry company had two members of ORCA onboard. They gave a whale watching lecture before inviting everyone to join them whale watching. Unfortunately we missed the first session where there were heaps of dolphins. The second session the sky was grey and overcast so we didn’t see a thing.

Whilst onboard I had a lovely time at the cinema watching the Second Best Marigold Hotel, what a fabulous movie and I thoroughly recommend it to anyone who loved the first one as much as I did. Ron however, stayed at the cabin. He’d eaten a dodgy chicken salad and was busy being violently ill and shivering uncontrollably. The food was pretty expensive, with the restaurant charging €30 for two courses. The outside cafe was cheap enough, however we experienced two undercooked meals and combined with the dodgy chicken from the pre packed meals were pretty unimpressed.

The ferry however, really was a great experience and unlike the other ferries we’ve caught before it was probably the first time we’ve felt connected with the biking community.

Arriving in Portsmouth it was cool as all the bikes roared from the ship. Immigration stopped us asking for our landing card, fearing the worst we parked the bike, filled the cards out and handed them across. Surprisingly we weren’t asked a thousand questions and made to feel like some sort of criminal. Our passports were stamped and we were on our way. The weather was a little wet but as we were only travelling to Brighton it wasn’t too bad. Tonight we stayed with a serious travelling family. Tomorrow we’ll check out what all the hype is about Brighton.