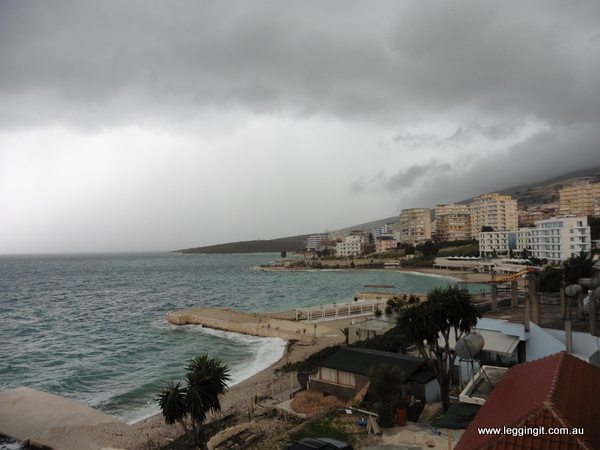 It was cloudy this morning as we headed up to breakfast. Last night we were exhausted after walking around Gjirokastër so I didn’t go back out to cover the bike. This morning we discovered the owners of the guesthouse had covered it with a tablecloth.
After lingering too long over breakfast the rain arrived so I had to pack between downpours. Eventually the rain eased off and we decided to make a run for it. The driveway out of the guesthouse was made of loose gravel and extremely steep so I told Michele that I’d pick her up on the road. Getting up the driveway wasn’t too bad but at the top I had a choice to either keep going up the road to a blind switchback or head back down the hill. I turned down the hill but when I dropped it into gear was going a whole lot faster than I realised creating a compression lock up of the back wheel causing it to fishtail on the rain and loose gravel. I bumped it up a few gears, opened the throttle and the bike straightened itself out. (I don’t normally lock up the rear but when I do I make sure I have an audience).
Michele joined me at the bottom of the hill and we set off on the road to Sarandë (only about one kilometre because we had to fuel up). On the road the rain was pretty steady and at the moment all the roads are dug up while they install a new water system throughout Gjirokastër. Mario had warned us about the road from Gjirokastër and he was spot on. It was rough and the windy bits were a little dangerous in the wet.
Not far from Gjirokastër we headed up over the mountains towards Satande. The panorama from the road up the hill was stunning with views down the valley and beyond. The road clung to the side of the mountain as it slowly climbed wound around the gullies. Some of the rock formations in the sides of the mountain were fascinating. Lines of sedimentary rock, like tiger stripes, scored the sides of the almost barren hills. Along the way we spotted shepherds with their flocks impervious to the rain and laughed as their sheep ran to a water pipe suspended across a small gully to scratch their backs against.

The traffic over the mountain to Sarandë was fairly light with just the occasional local who seemed to take any opportunity to overtake us whether safe to do so or not. Passing through a gap in the mountains we passed small mountain villages with very modest dwellings. Some of the shepherds had erected seasonal huts from whatever they could find.

Once through the mountain pass we wound back down through the hills briefly checking out the famous “blue eye”, (which wasn’t what we thought it was going to be) we may have to go back on a dry day.

Eventually we made it into Sarandë where we discovered they’re installing water pipes so every road in the city has been dug up.

We weaved our way through the traffic and found our hotel quite easily. The road to the front of the hotel was gravel and chopped up really badly from rain but I rode down and parked up. 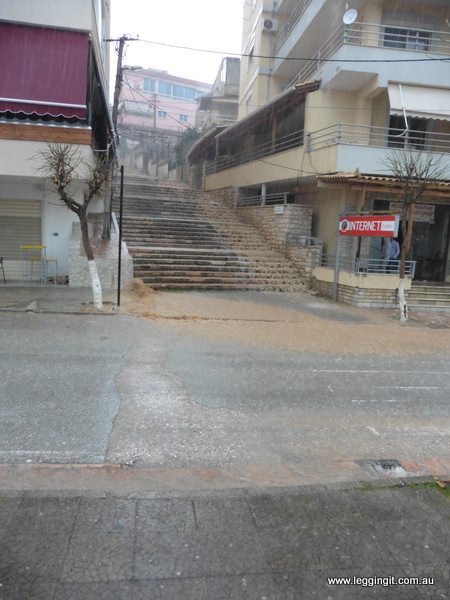 After settling in we headed towards the heart of the city looking for something for lunch. Light rain had just started falling again when Michele stepped into a local kebab shop and we found a table. Then “BOOM” the lightning and thunder show started, power went out throughout the city and the rain pelted down. We haven’t seen rain like that since Asia. The water was pouring down the steps opposite us in a big wave and the road suddenly started flooding.
No electricity didn’t faze us and we enjoyed our lunch waiting for the rain to stop. It was also a time to have a chat with Tommy a local hostel owner who pointed out a few places to visit whilst in town.
After an hour or so the rain eased and stopped so we wear able to leave to head back to the hotel for a break.
Almost on dark we headed out along the waterfront where we discovered a long Riva area where the locals were all were out walking. The Riva was lined with cafe’s and restaurants where people could check out the fashion of the walkers. Everyone really gets dressed up when they walk here. 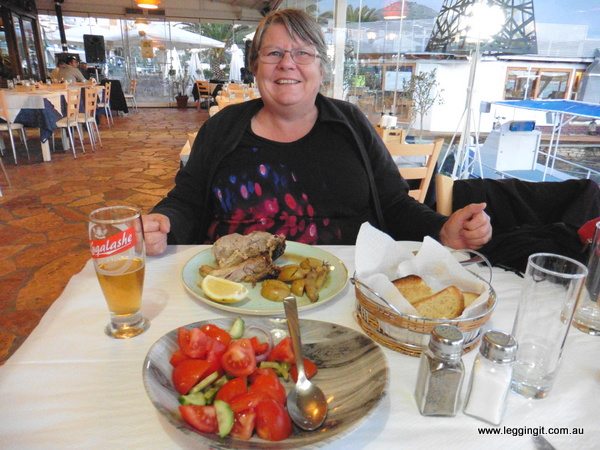 About midway along the Riva we found a restaurant overlooking the boat harbour which was really high class. It was a great spot for a meal with great service. 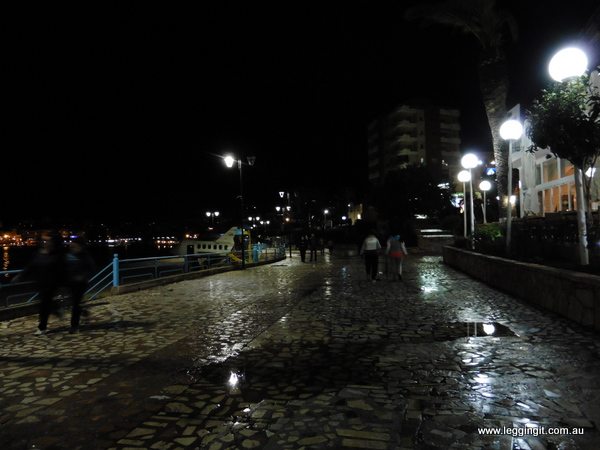 Eventually we decided to leave and join the locals strolling the Riva. It was a perfect night to be out and after a few kilometres we headed back to the hotel. Tomorrow we’ll take a run along the coast and see what we can discover.