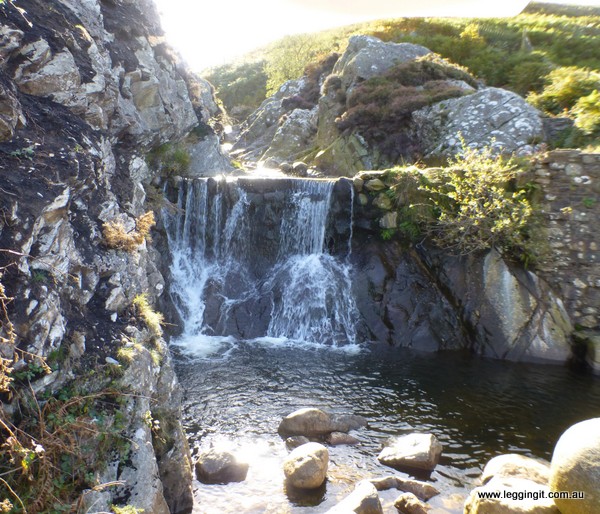 After enjoying another breakfast in the company of the birds, the weather forcast was for good weather so on todays agenda is Swinside Stone Circle, and Bootle Common’s waterfall.

Our B&B have a folder with lots of walks around the Lakes District many looked interesting but we started with the closest one through the village and up to the old town water supply. So we donned our walking shoes, the walk through the town was quite interesting passing the redbrick church surrounded by massive gravestones and past the old water mill which was in desperate need of repair.

The road lead us up the hill, past the former home of one of Nelsons captains and it boasted a glass gazebo on the roof, from which the captain liked to gaze out to sea. After such a build up we were expecting the captains cabin of an old three master hanging off the roof, but sadly it turned out to be just a glass box a few feet wide which the old captain probably just popped his head up into and looked really out of place.

At the end of the road a gate led into the common, an area set aside by the council for the community to use. Bootle Scramble Club use the area for its events in summer and it would suit off road riding with hills suiting various levels of skill. The hills are mostly covered in bracken fern but there’s some cleared areas. The B&B own a piece of land attached to the common which they’ve planted 20,000 trees of English varieties like oak, rowan, with a view to turn the land back into a forest. The land is split by a river which flows from a small waterfall. In years to come it’ll be a nice place to walk amongst the trees along the river. 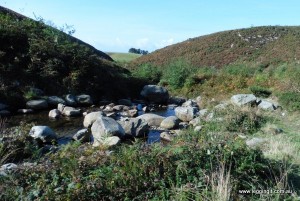 After our walk we headed to Broadgate about 15 kms away to check out the Swinside Stone Circle. It’s a lot quieter than some of the other stone circles, due to location, as there is only a small parking area it is unsuitable for big vehicles.

There’s 55 standing stones some about 2 metres tall, with an entrance on either end, dating back to the Neolithic era. The walk up the hill through the farm is quite stunning, with hills and mountains ringing the hill where the Stone Circle is situated. As there were no other people we were able to be alone in the Stone Circle and maybe due to that felt a real energy. After we had been there about fifteen minutes, an English bloke arrived. He told us that in the recent past pagan festivals were held on the site which at night would’ve been awesome.

On our way back down the hill we met some Australians, who turned out to be the owners of the flag we spotted yesterday. Millie and her family were from South Australia and were staying at her grandparents, who were enjoying English summer before heading back for an Australian summer. It would be a great experience for kids to be going to school learning about ancient people and then just popping up the road to check out a Stone Circle.

There is a legend that if you count the number of stones in circles twice you’ll come up with two different numbers. Milly assured us she had counted them and got the same number so not sure of merit in this legend.

We decided to once again try a trip over Hard Knot pass as the weather was really good so we headed up the Duddon Valley. It was a nice ride, this time seeing things from the opposite direction with hardly any traffic. It was pretty late in the afternoon as we reached the crossroad and headed toward the pass. Hard Knot is a series of switchbacks and is Britains steepest road. As we approached the bottom some crazy woman almost run us down which didn’t impress us and as we reached the first bend a steady stream of cars started coming down.

At this stage Ron decided that ticking a list wasn’t worth the chance of being run down so we turned around and headed back. We stopped at the Newfield Arms for afternoon tea and started chatting with a local bloke and funnily enough he knew the Australians living just up the road that we’d met earlier. While we were chatting the Aussies turned up and we had a nice chat before heading back to Bootle almost late for dinner again. Tonight it was a true league of nations, five Malaysians, four Australians, three Brits and one Icelander. Lots of interesting conversation meaning we didn’t leave the table until poor Michael was trying to set the table for breakfast before he headed to bed.

Tomorrow we head south to Worcester to visit some friends we met through couch surfing.