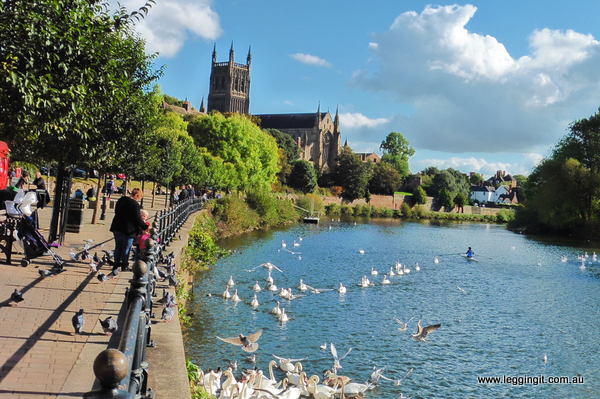 We have all heard of Worchestershire Sauce but did you know it is also a beautiful part of England with lots to do..

Yesterday as we loaded up the bike the rain clouds were just forming in readiness for our departure, and light rain started falling as we headed south. The rain lifted as we reached the motorway and it was an easy run south. We stopped off at the Truckhaven on the way and were surprised at how cheap everything was. It sure beats the normal services. As we headed further south the traffic was appalling with road works slowing everything down. We joined in with another two bikes lane splitting passing through the stationary traffic. It weird how some car drivers behave with a few peanuts deliberately moving across to block us and others deliberately changing lanes in front of us to cut us off. By late afternoon we arrived in Worcester to visit our friends Lesley and Paul, where we’ll be staying for a few days.

When we woke up this morning the weather was showery so we decided to leave the bike in the shed and catch the bus into Worcester. Sometimes it is easier than walking around in wet clothes all day.

We had a wander around Worchester and checked out the Cathedral which dates back to 1084. It has the tomb of King John, Richard the Lion-hearts brother who is mainly remembered as being the tyrant in the Robin Hood stories. The cathedral was magnificent inside and there were a few things which caught our eye especially the tomb of a bishop which had its face blackened and feet and hands cut off. The Cathedral had been raided at some time and they had done this for some bizarre reason.

The tomb of John de Beauchamp and his wife also drew our attention. They were beheaded at tower hill who’s feet rested on greyhounds but heads on black swans. No one seems to know why as in which in Black Swans 1388 hadn’t been discovered yet.

We enjoyed wandering around made more enjoyable by the choir practicing as we went.

As we left the Catherdral, the sun came out and we enjoyed a wander along the river Severn which is home to the largest amounts of white swans we’ve ever seen. They are all tagged and according to the local lady we spoke to are here for the Winter, the local all come down and feed them along with a swan rescue organisation to ensure the do not starve. It was funny seeing them all in a line heading towards the next person with a bag of food for them.

After lunch we checked out an old street full of Tudor buildings many of which had been turned into shops. Some of the old Tudor buildings had suffered from foundation subsidence and sagging timbers so the top floors were no longer used for anything other than storage. In the street that there are two Tudor Buildings which had been converted into museums.

We checked out Greyfriars, a Tudor House which is operated by the National Trust. It’s a really quirky place which dates back 500 years and was the stately home of rich local merchant family, an air raid wardens post, school clinic before it fell into disrepair in the 20th century. A quirky local brother and sister were the last tenants of the house and transformed it back to its former glory sourcing materials from different sites. The best part about it is it still looks lived in with the lounge still having an open book and pair of glasses there.

The pair were famous for hosting dinners for local benefactors and the like and sending out invitations which weren’t addressed with RSVP but in plain English. When their parties started at 6 pm it also meant the doors wouldn’t be unlocked until 6 either and when the hosts wanted you to leave they just stood up and it was over. They also didn’t like to touch people so they wouldn’t shake hands either.
All except one room were beautifully restored to their former state however, the dining room had been decorated in bright yellow which was pretty mind blowing. It did have an older style wall paper but the old girl heard after putting it in that there was a risk of arsenic poisoning so she covers it with brown paper so it is now still like new.

Nearby there is Severn Railway Station which has been built in an old style with the local tourist trains with carriages that’d been renovated. It was like being in a Harry Potter movie old trains, and all the other stuff like old baggage trolleys and the like. 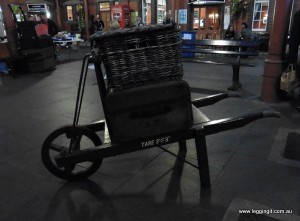 Tomorrow if the weathers good we might check out Coombe Park, a National Trust property with large gardens.