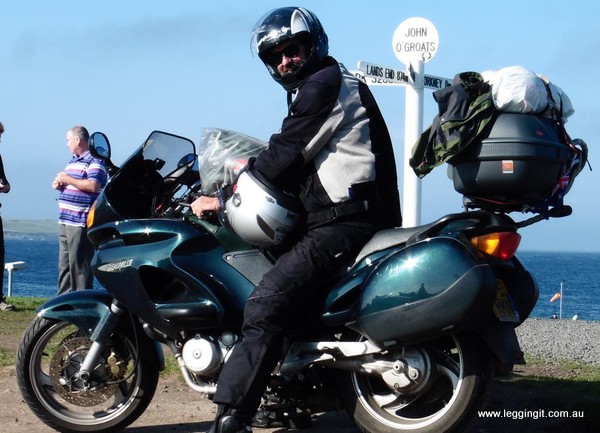 The rain which fell steadily through the night eased up at first light and was replaced by scotch mist (low cloud, fog and light misty rain). After breakfast at Birch Cottage we left Inverarnie and headed onto the A9. Birch Cottage was such a find. Situated in a country setting, it was so peaceful and relaxing but still close to Inverness. There were even pheasants in the garden scratching around.

We met a lovely group of Chinese Students who are over here studying at the B&B and spent some time chatting to them before leggingit to John O Groats.

The bridge over Inverness was blanketed in fog so we were unable to see anything The fog continued up the coast and at one stage we were down to one car length of visibility but luckily that didn’t last too long. Vehicles appearing out of the mist at close quarters is never good. 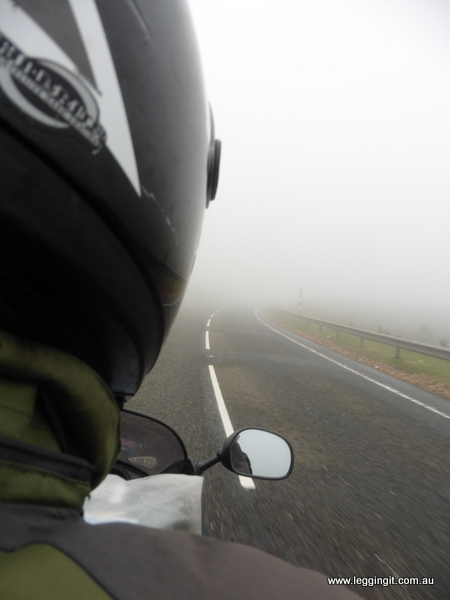 Along the way we passed through some beautiful towns like Evanton and Goldspie with some lovely old buildings. The countryside was ever changing from green pasture, and fields of hay to bare granite cliffs, forests or fern.

The road snaked along the coast and every now and then we passed the railway which is supposedly one of the best train journeys.

As we rode into Helmsdale we noticed a strange statue on the hill so we investigated. The statue called The Emigrants commemorates the plight and the successes of the thousands of Scots who were forced from their homes to make way for sheep during the land clearances of the 19th century. The statue commemorating the Scots triumph over adversary. It’s also fitting that it overlooks Sutherland land as the Duke and Duchess of Sutherland set new levels of cruelty during the clearances. 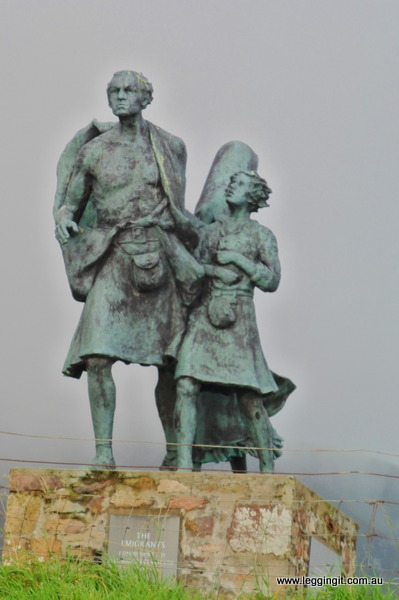 Unfortunately the little roadside cafe was closed but we took a ride around Helmsdale and down to the harbour. We stopped off at the Thyme and Plaice for a bacon roll, cake and coffee (to warm the hands on). It was a great place to stop and we had a great chat with the owner who’d come north to make a go of it.

Our next stop was Wick, home of the worlds shortest street and Mackays Pub on that street. As we arrived in Wick the sun started shining hallelujah. We checked out the local church and were surprised that the graveyard was filled with granite stone slabs covering graves. We couldn’t walk without standing on a slab. 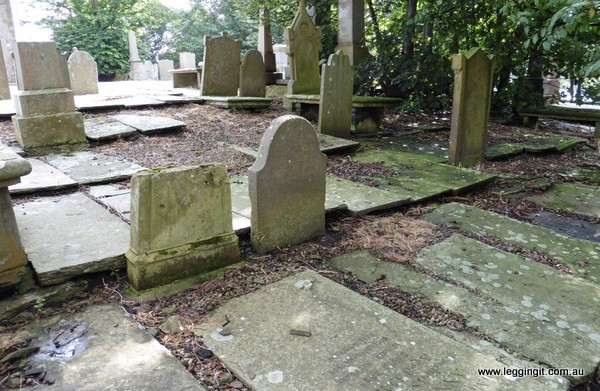 Another interesting site was across the road was a number of plaques commemorating people who’d made a sacrifice for the community. The first one was to a local couple who for 4 decades had organised the local pipe bands and had wine championships, there was another to a scoutmaster who’d served the local scouts for many years. There were two others, one commemorating the local men who’d lost their lives on HMS Jervis Bay a converted liner which had taken on the German Battleship Admiral Scheer and been sunk. The other a converted trawler which had been lost with all hands.
Wick was bigger than we thought it would be. We walked all around the town and met some nice people rallying for the Yes campaign for the upcoming independence referendum. It been interesting travelling through the country seeing which areas have Yes signs up and which ones No. Also finding out why people are on either side of the debate. The only thing that is so mind numbingly boring is the BBC’s coverage. They’ve trotted out so many experts to talk about the same crap over and over and over again. They could use their coverage to extract information out of people. “No more I’ll tell you everything”

We popped into the tourist information which just happens to be in McAllan’s Kilt Hire and we spotted the new Saltire Kilt. A lighter blue than the old one, with the white cross and lions. What a cracking looking kilt, guaranteed to win the ladies in that one. 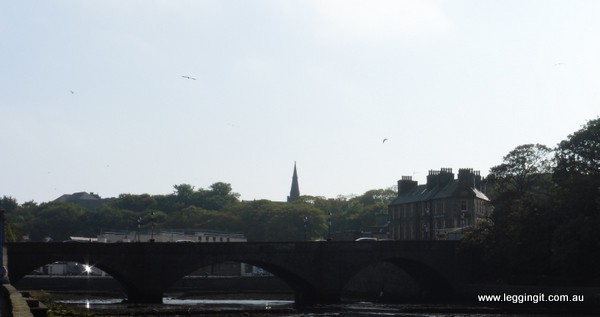 The run up to
John O’Groats was pretty nice from there as we got closer we noticed that the land was a lot more windswept with patches of heather and moorland but turning to nice and green as we rode into town. 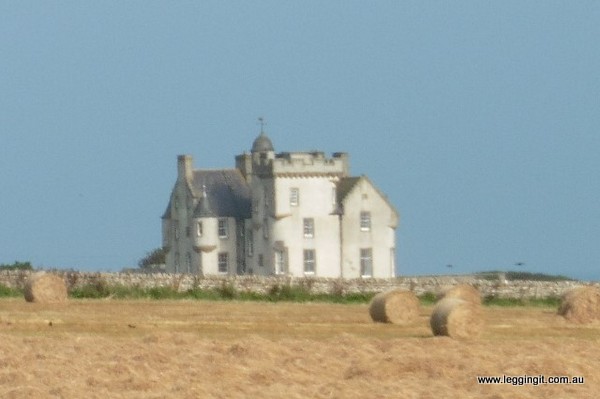 John o’ Groats was named after Jan De Groot a Dutchman who was invited to set up the ferry to the newly purchased islands of Orkney in 1496 by the king.It’s said that he charged 1 groat for a trip. Another story is that he settled a dispute amongst his sons over the inheritance he installed 8 doors leading to an eight sided table in his house. The locals here are called “groatsers” but we dunno if that’s good or bad.

When we arrived at the John o’Groats signpost we were approached by a guy who apparently makes his money by putting up a sign with a city from whatever country you’re from and takes a photo and sends it to you for £12. Whoa, there’s still highway men around today.
We soon discovered there’s another signpost just up he road and its free to take a picture and its got a better backdrop. 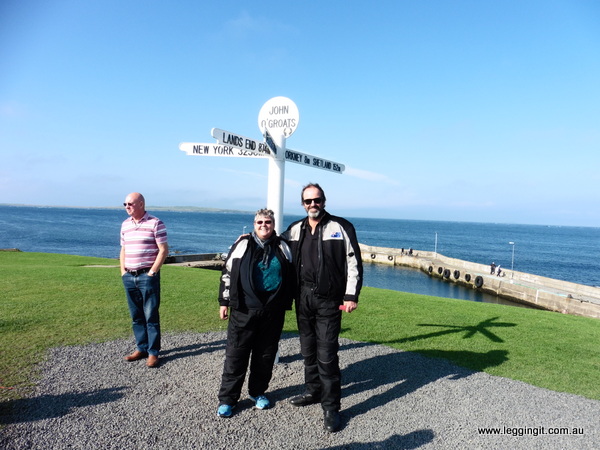 We got chatting to a young bloke riding a Suzuki Hayabusa with an extended swing arm. His green monster was absolutely mint, very envious. He’d popped down from Wick to Helmsdale for a “chippy” and now had popped up to “John o’Groats” for a quick ride(it would’ve been a quick ride too)

While we were having a coffee we noticed people with a banner near the sign and unable to contain our curiosity went over. It turned out hat they were members of a Rotary group who were waiting for a rider who’d ridden all the way from Lands End to raise money for Polio. Very soon David arrived to cheering, champagne, hugs and kisses. He’d ridden 1100 miles in 10 days and raised £5,000. A truly epic feat. It was great to share a little of his friends excitement. 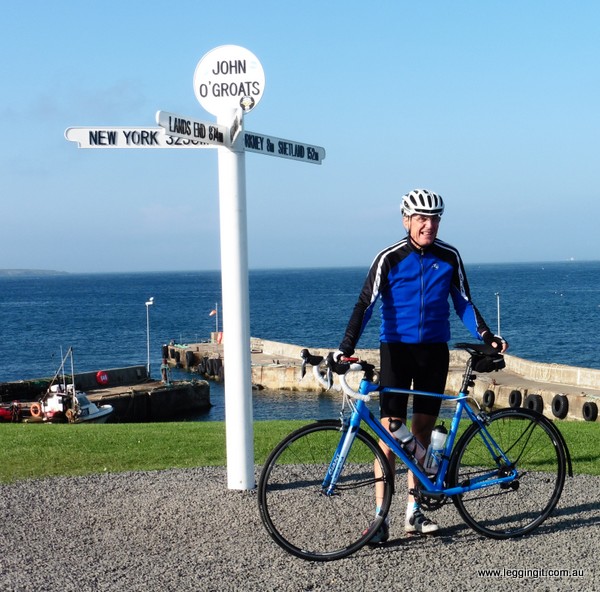 Another group arrived arrived with a banner while we were standing there. Three mates had just completed walking the length of Britain. They’d done it in bits and pieces over the last ten years. From Lands End in the south to finally John o’Groats. Truly remarkable. 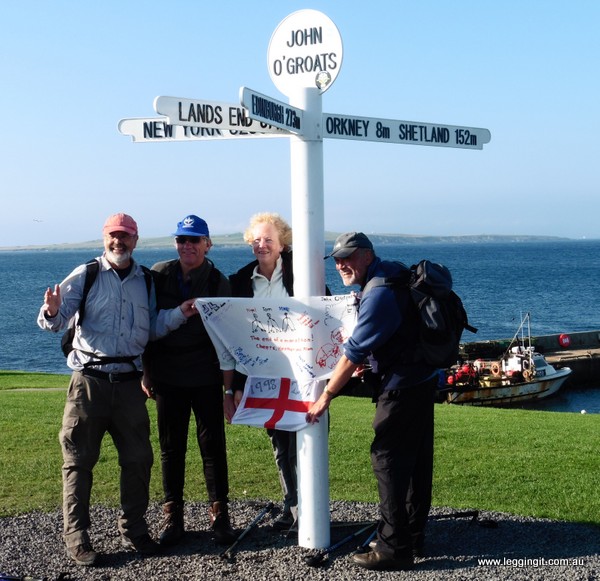 After booking into the B&B we headed down to the Seaview hotel for a meal and also found out Deloites had just finished a mass charity ride. It would be so great to have some sort of TV show that shows everyone that comes to John o’ Groats and their reasons.