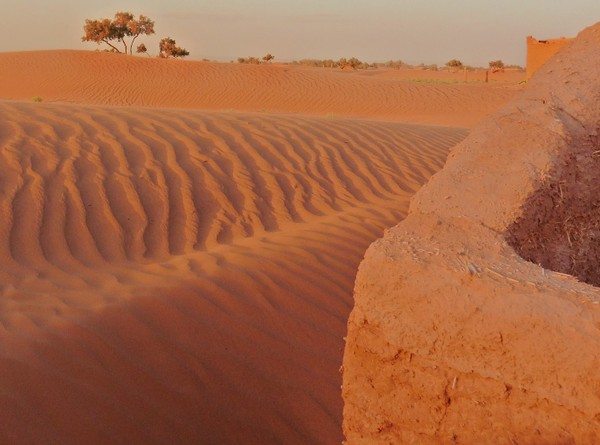 Heading south from Zagora our destination was Mhamid where we were looing forward to couchsurfing Saharan style. We had secured a couch with Ismael, a young Moroccan man and his family. We were really looking forward to it as his profile said that they lived in a camp in the Sahara Desert. Contacting Ismael before we arrived we asked how will we find you? He answered “Mhamid is not that big!” When we rode into Mhamid sure enough Ismael stepped out and greeted us. Yes he was right, Mhamid wasn’t that big.

Mhamid is a dusty little village at the edge of the desert located at the end of the sealed road where most of the locals make a living out of tourists, either by accommodation, tours, and souvenirs.

Ismael directed us to a local cafe while he tracked down his cousin and half an hour later we followed them on their motorcycle out of town. The ride out took us down a rough dusty track that gradually degraded from rough gravel to sand, which the heavily laden bike didn’t like one bit.

The camp was a few km’s out of town on the edge of the Sahara and consisted of a heap of mud brick buildings in various stages of repair. The toilet block, two square huts, a kitchen and a two room hut were all built in the square style with saplings supporting, bamboo lined ceilings which had been waterproofed with a roof of clay. There were a two other buildings which consisted of four walls, a single doorway with a tent roof, a more nomadic building. Nearby there were other similar buildings which the desert was in the process of reclaiming.

Despite being used quite often the camp compound had heaps of soft sand so parking the bike in front of one of the square huts involved running off to find something solid to put under the stand. 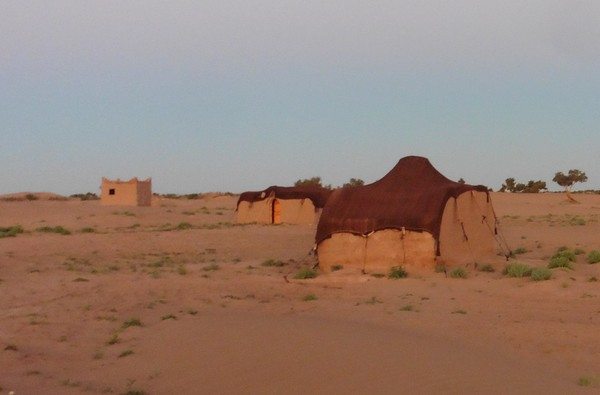 Ismael invited us for tea which is the usual Moroccan greeting and soon got down to business. The family we’d thought we’d be staying with were actually his brothers and cousins as the rest of the family lived in Mhamid. His couchsurfing profile was actually a front for his real business, desert tours. It’s understandable in poorer countries that people can’t be expected to provide for us and we were expecting to pay for food but this was a bit sneaky. We felt a bit cheated for instead of a couch surfing experience it was actually a tour. There were two tours on offer an overnight tour to the desert and a one day desert tour. Sleeping in a tent in the desert didn’t float my boat at all so we decided on the latter. 4WD out to an Oasis for lunch in a restaurant and then on to see the largest dunes in the Sahara. The rest of the day was spent checking out the sand dunes around the camp and chilling out.

Also we taught Ismael and his cousin Hussan how to play a card game called “Hello Jack”, a game we learnt off our Iranian Couchsurfers a few years ago. Hussan was a crack up, he really loved the game and got right into it. Ismael, however was continually cheating, pulling cards from the bottom of his pack, hiding cards and generally trying to be the “big man”. It was so frustrating. We were so relieved when he left for town in the afternoon to pick up a group of German Couchsurfers, due to arrive by bus later in the night. Hussan was left to babysit us, so we got back to the cards.

Pretty soon another young guy Hussein arrived with three camels for an hour long tour he was conducting at the camp next door. He also joined in the card game while waiting and after the tour returned to the camp.

As night fell the two young men started preparing Tagines for tea, by candlelight as there was no electricity and it was funny watching Hussein check the tea using the torch on his phone. Despite the basic ness of the camp and the lack of electricity all the guys had mobile phones which they checked regularly. It was pretty impressive however to watch the pair of them whip up a really good tagine. We really enjoyed chatting, playing cards, and drinking tea with the pair of them.

At 11 o’clock pounding on the door of our hut announced the arrival of the Germans, however instead of three there were ten. Ismael quickly had them signed up for tours. Kaaaching, tea for everyone and break out the bongo drums. Everyone was ushered into the biggest hut where Ismael, his cousin Said, Hussan and another friend soon were singing up a storm celebrating their good fortune by outfoxing all the other tour operators in Mhamid. Despite it being a real tourist moment with the four young guys singing and playing drums it was still a nice experience. They were really good drummers, singing songs of Berber, Mali and even Spanish origin while a few people clapped along. Meanwhile the Germans were split between enjoying the drumming and clapping along or scowling at the blatant touristic experience. An hour of drumming was enough for us and as there was a big day ahead we retired to bed enjoying the millions of stars in the clear desert air.

It was a rough night’s sleep because one thing we didn’t consider about sleeping in the desert was sand. It was in the bed and falling from the ceiling. Whenever the door was opened a fresh load of sand blew in.

The Germans were up gathered around a table ready for breakfast which consisted of stale bread, jams, and coffee. The wind was howling and pretty soon the jam was covered in sand giving it that extra crunch. Then the wait started. The plan was to leave at 10 am but the Germans had to go back to Mhamid to shop for food for their overnight stay. It was 1130 by the time the two 4wds were loaded and we were rolling. There were 8 in our Prado and 7 in the old Landrover.

The trip out was awesome passing through semi desert, gibber desert and finally into big sand dunes, with dunes 350 metres tall. Our driver drove cautiously and we were quite happy as he navigated through country where tracks led in every direction without the aid of signposts or GPS.

Eventually we arrived at the ‘oasis’ where nearby positioned in a clay pan between two sand dunes lay a tent camp. Climbing to the top of the dunes gave a great view of the surrounding dunes and oasis. Being in a desert we expected to be alone but off in the distance there were hikers and also two Germans leading camels. They soon arrived at the camp and told us they were part of another tour. Meanwhile the boys had been busy preparing lunch and we dined on Moroccan Salad and Chicken with Cumin. Luckily most of the Germans were vegetarian so Ron was happy.

After lunch we stood around for another our wondering when we were going on the remainder of our tour to the highest dunes in the Sahara… suddenly we were bundled into the old Landrover and without any fanfare we headed off on our trip back to Mhamid. We were told we’d be back by 4 but as we had a late start we’d be lucky to be back by 6.

Our drive back was rough. Land rovers aren’t the most comfy vehicles but when they’re in the hands of someone who drives them roughly they’re murder. The rule on dunes of fast up slow down was out the window as the speed was constant drinking like a man possessed. Accompanying us was a leathery faced local who spoke excellent English and we chatted all the way. He’d been out in the desert trading with nomadic people and was on his way back to town. It was hilarious when we made a stop in the semi desert area amongst giant plants of rocket which had germinated after the spring rains. The driver and the old man were soon pulling out great bushes of rocket, dragging them to the Landrover and loading them onto the roof. “For my goats” the old man said with a smile. The roof was soon covered in plants and the old man threw a netting over the hoard to keep it in place.

Finally we arrived back at the camp, loaded the bike in record time and were following the Landrover back to Mhamid.

Even with the throttle full open we couldn’t beat the dying sun and as we headed north over the hills it was soon dark.

Arriving back in Zagora I was so ecstatic with the thought of a warm shower and a nice bed to sleep in filling my brain. The guesthouse were pleased to see us and promptly stored the bike in the garage before serving us tea.

While this was not a completely negative experience, looking back we learnt a few things, before setting off on tours shop around for a price so that you don’t feel ripped off. Also if you want to take a tour it probably is better to take one with a proper tour company. Had we known that our couchsurfing was going to go so bad we would have booked a tour through the hotel we stayed at in Zagora. They are professional, friendly and very honest we are sure we would enjoy their tour. You can get information about what they offer including the guesthouse (one of the best we breakfasts we had in Morocco) here