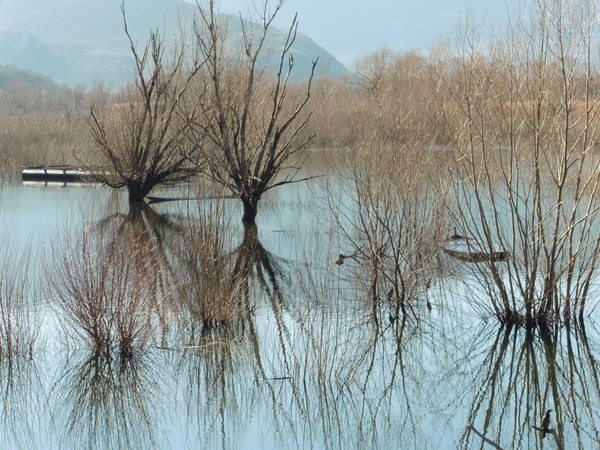 Today we took trip out to Lake Skadar, the largest fresh water lake in Montenegro and Albania. There’s a toll road which goes through a tunnel under the coastal ranges emerging not far from Virpazar, but we decided a trip over the range sounded much more fun.
We headed to Petrovac where we took the road which snakes a bit back and forth across the range before a long climb to the top. Coming over the top of the mountain range was so cold as it’d snowed and all the surrounding countryside was covered in a lovely white blanket.

It was a slow journey down the hill as we enjoyed the view across the beautiful blue Lake Skadar. My head was so wooly today as I’d left the unit without my wallet, phone and camera. Maybe it was lack of sleep after fighting Michele for the blankets all night, but I think it’s actually lack of coffee. Our cafeteria died in Split and we’ve been surviving on weak local tea. Two tea bags just don’t measure up as a kick-starter against a good cup of coffee. 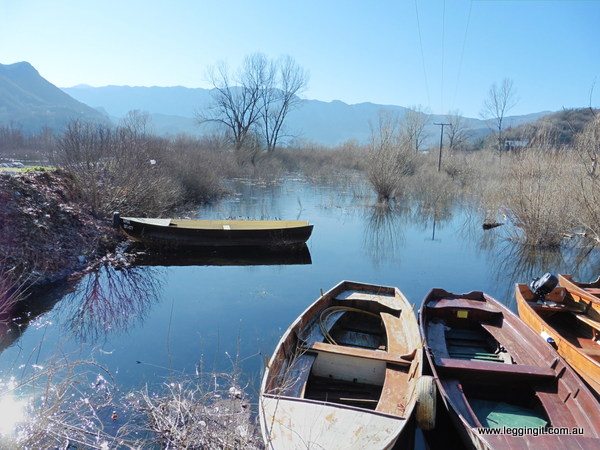 At Virpazar we took a break to warm up and search out a cafe. We were surprised as we pulled into the little town as dozens of men in army camouflage and blue police type uniforms were everywhere. It was a bit off-putting walking into a local coffee come betting shop to be confronted with about twenty blue uniformed figures. At first we thought they were police. After translating the words on their uniforms and putting all the clues together it turned out that they were army engineers who’d just dismantled a temporary bridge across the river. Looking out across Lake Skadar was amazing with crystal blue waters and snow capped mountains in the distance. 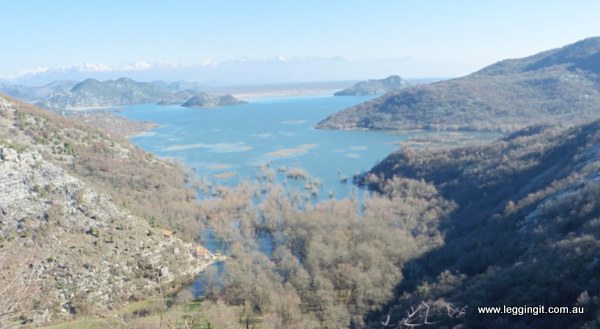 We decided to take the road to Rijeka Crnojevića a narrow one lane road which led over the hills to the north of Lake Skadar. It was a nice slow ride, and although the road was narrow, in most parts it was pretty good. As we reached the top of the hill we had great views over the lake. The countryside was pretty hard as it was covered with rocks and spindly scrub. There were very few farms and the occasional vineyard and no tragic on the road. There were no safety barriers on the roadside just big rocks. 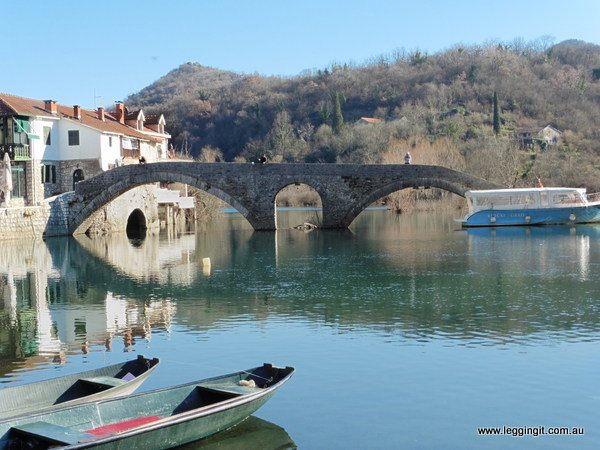 Arriving in Rijeka Crnojevića we decided to break for lunch. Rijeka Crnojevića is an interesting town which has two quality restaurants on the rivers edge but less than 100 metres away are abandoned buildings. The town looks a little run down and inhabitants also look a little hard bitten, but maybe that’s just because it’s off season. A few of the local blokes were fishing off the stone bridge, catching some of the smallest fish, like pilchards. Looking in the water we discovered the river was teaming with them. We wondered why they just didn’t use a bait net.
After a walk around the town we went back to a konoba we’d parked the bike near. It was pretty rustic with zebra and antelope hides hanging from the walls and a wood stove in the middle of the room providing heat. We ordered the local montenegran specialty and coffee. As the owner was delivering coffee he asked us where we were from. He was quite surprised when we told him Australia, as he himself had been living in Melbourne but had returned home to look after the konoba. Soon he had the maps, spread across the table telling us the best places to go in Montenegro. When we told him we were catching the train to Belgrade he suggested we take the bike on the train and rang a mate at the train station to enquire about it. Unfortunately we would have to provide all the strapping so we decided that it may be better just to train it here and back. Lunch arrived and it was Okrinje, home made spiced meatballs served with cucumber, onion and carrot. It was also accompanied by a mixed salad with some of the biggest green olives we’ve ever seen. It was a great experience talking to the owner, trying to remember the names of Melbourne streets, whilst watching through the window as locals caught tiny fish. 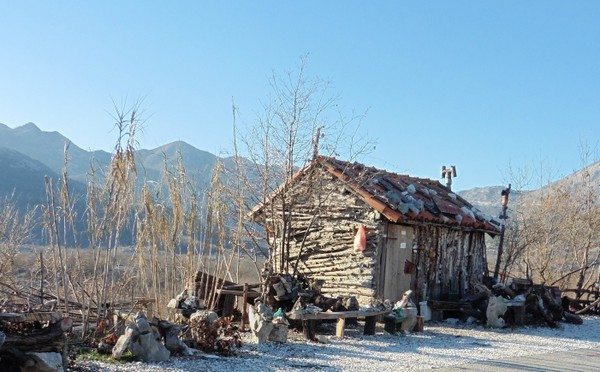 We decided to head back to Bar via Cetinje which was only about 15 km’s away. As we reached Cetinje snow was covering the roadsides and hills so it was extremely cold. It was nice though to see snow again. Even though its cold on the bike there’s something about it which is quite beautiful. The road took us over the mountains and down a long winding descent into Budva. As the last rays of the sun were stretching across the bay of Bar, we were covering the bike. The lady at the apartment has allowed us to leave the bike and all our gear whilst we train it to Belgrade and back. Honestly this is one of the nicest places we’ve stayed at, for we’ve been welcomed so warmly. As my eyes can hardly stay open, although it’s only 7 o’clock, it’s time for bed. Tomorrow we catch the 9.30 train to Belgrade, supposedly one of the worlds best train journeys.