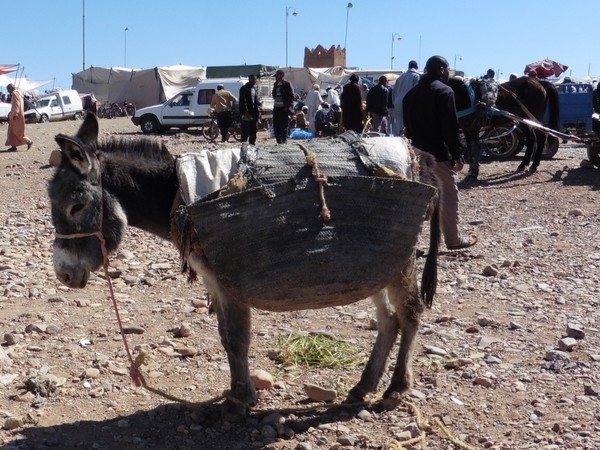 Today we are zipping to Zagora…Rain, what the? After over a month of clear days we awoke to the occasional pit pat of rain on the window. Checking the weather forecast didn’t help because there was no rain on the forecast. How did this happen?

Well we thought we’d see if it would develop or dissipate whilst we enjoyed breakfast. It was a light sprinkle which was threatening to get heavier so we unrolled our wet weather gear and loaded the bike. By the time we started the climb up into the Jbel Sarho the rain had ceased and it was threatening to heat up so we took a break and rolled up our gear.

The countryside really is extraordinary with a blanket of wildflowers struggling for life amongst the rocky ground. Up through the hills ridges of yellowy square blocks stick out through the contours, creating swirls, ledges, mohawks …..absolutely fascinating. The road winds around the tops of massive chasms before passing down the hills to Agdz.

The countryside changed as we reached the valley floor with savannah type trees dotted here and there. Agdz was absolutely humming as it was market day but as the rain clouds were starting to chase us we decided to head on. The road follows along the Draá river with palm groves along the length and dusty mud brick towns every couple of kilometres. The towns all feature Kasbahs, fortified houses made from rammed earth. In days gone by a safe haven from raiders. Some of the Kasbahs now abandoned with crumbling walls an epitaph of former glory, others still the home of families so in good repair, whilst a whole new generation of newly constructed cater for tourists.

Arriving in Zagora immediately we were met by friendly guys on motorcycles who were keen to assist us to our hotel, even though they wanted us to go a completely different direction. It wasn’t hard to find the hotel and park the bike in a secure garage for the night. We took a stroll around town and discovered it was struggling a bit. Although it is peak season for tourism the recent lack of numbers caused by a number of factors was having a devastating effect on the locals.
We stayed at Karim Sahara a great little hotel just off the main street. Mohamed and his staff were super friendly giving us tips on things to do around Zagora. Zagora is one of the main towns of the Draa Valley and in former times was the tax collection point for caravans making their way from Timbuktu, 52 days away by camel. There’s a sign which commemorates this fact on the edge of town. 52 days on a camel across the Sahara, romantic as it sounds, does not sound like much fun to me or my butt. 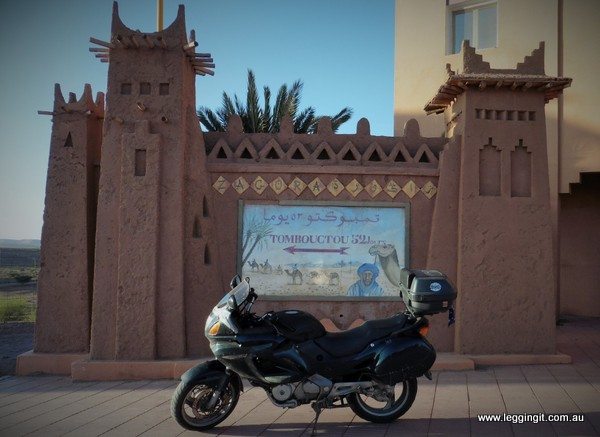 The Draá Valley supposedly is the second largest palm grove in the world. On our return from Mhamid we took a ride along the tourist drive then further on through the villages and palm plantations which line the river. It was interesting observing the day to day life in the villages with women washing clothes in the irrigation canals, men sitting in the sun along the walls chatting, kids playing soccer. 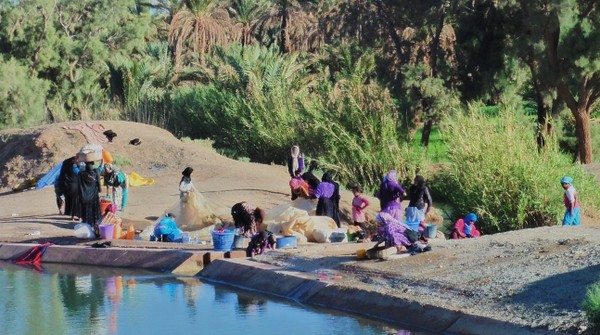 We also visited the local Museum housed in an old mud-brick Kasbah. Arriving at the Museum we followed the sign down a darkened alleyway with alleys intersecting here and there. The sort of alleyway where you’re just expecting someone to pop out of the shadows. When we arrived at the museum entry we found it closed, but the bush telegraph works really well in Morocco and soon a man was creeping down the alleyway jangling keys. The museum was really quirky, tracing local history, day to day life and customs. There were all sorts of exhibits including a guest room with old gramophones and tea glasses that would shatter if poison was put into them.

My favourite was a birthing room, all set up for the next delivery with signage explaining the traditions of birth in the area. 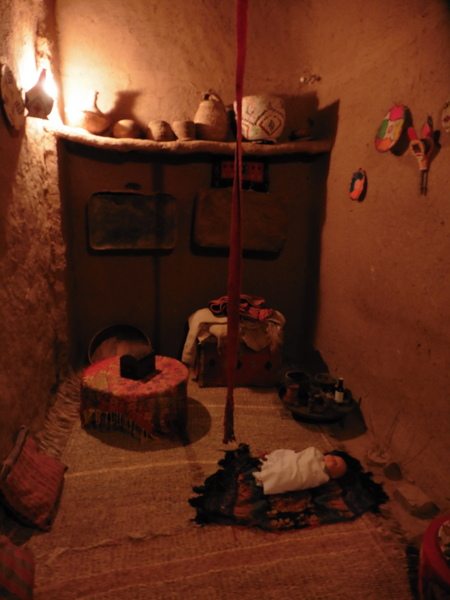 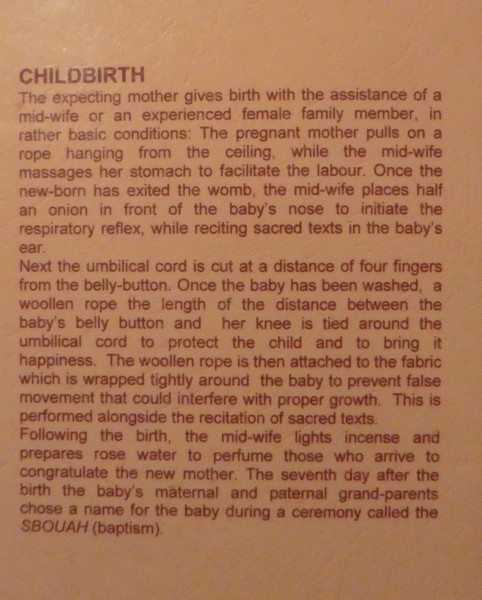 There were exhibits from The Draá valley is home to three main ethnic groups Berbers of the Ait Atta clan, Arabs and Africans, the Draá. Each group has their own cultural practices of religion, marriage and clothing. Supposedly in former times the Arabs were the merchant and ruling class and invited the Ait Atta from the hills as security for the date plantations. The Draá came from the Mali region to work as farm labourers. It was interesting looking at all the different jewellery and clothing from each of the different groups. In other parts of the museum were displays of pottery production, weaving and general life in the Kasbah. One interesting display was the farming display. In former times water was rationed to each land owner depending on the size of his land holding.

Once again we were lucky to be in town on market day. Moroccan markets are absolutely fascinating with all sorts of things on sale, services and on the spot production. They’re the place where you can get a sore tooth pulled, your plough refitted, a shave and a haircut, and we even saw donkeys being shod (much to the donkey’s disapproval).

At night the men retire to the cafe’s to watch football and the women sit chatting in groups whilst their kids happily kick soccer balls. The much awaited Real Madrid versus FC Barcelona clash was on whilst we were there and there were men lined up ten deep outside every cafe trying to get a glimpse of the game. The roar as goals were scored were deafening.

Zagora is also the starting point for many desert tours. The town of Mhamid “the gateway to the Sahara” is just over an hour south so many tour operators base themselves in Zagora.