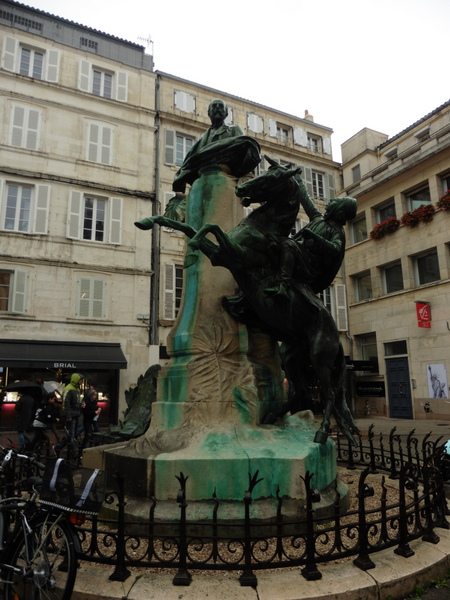 Over the last three days we’ve been staying at La Pallice, the port of La Rochelle. It’s given us a chance to explore La Pallice and the nearby island known as Ile De Ré. Today we headed into the city of La Rochelle  to explore it and learn a little bit about it. 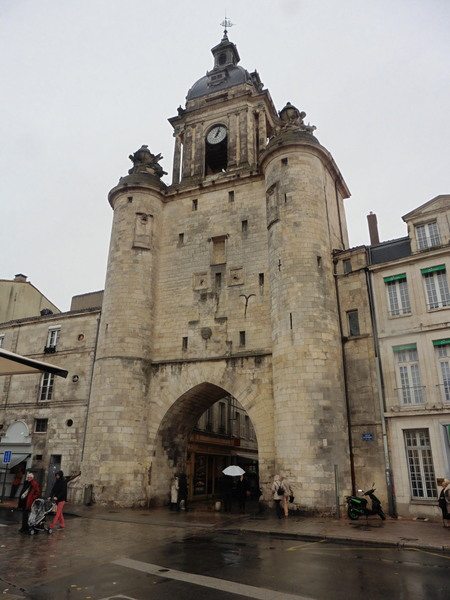 In its day La Rochelle was an important trade port. It was home of the Knights Templar until the French king decided that the easiest way to clear his debts to them was to get rid of the people he owed money to. In the early 12th century La Rochelle became a free port and trade flourished. By the 15th century it was the largest port in France on the Atlantic. During the War of Religions the city was predominantly protestant Calvanists which went against the Catholic French Kings. Huguenot rebellions led to the siege of La Rochelle which lasted 14 months. Persecutions followed and in the end 300 Huguenot families were exiled by Louis XIV in 1661. Some fled to England and others to America.
Trade returned to the city as it rebuilt itself. La Rochelle was involved in the triangular slave trade where goods were transported to Africa to be traded for slaves. The slaves were then transported to the Americas where they were traded. Then from the West Indies sugar was transported to Europe. From the colony in Canada fur was transported. It was a lucrative trade which saw La Rochelle booming once again. However, the french revolution and the war with England put an end to the slave trade in the 1790’s. With the rise of Napoleon and subsequent wars La Rochelles glory days were soon behind her. 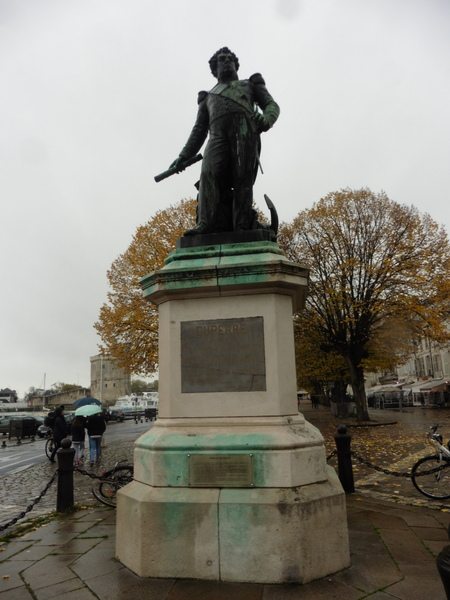 In the Second World War the German Navy built massive submarine pens near La Rochelle. Built of reinforced concrete they became impregnable to bombing and are still standing today.

These days La Rochelle has a large boat building industry and the biggest marina in France. Nearby La Pallice has a big industrial and ship handling facility associated with oil and timber. It’s home to the U-boat museum and a Maritime Museum which is home to the Calypso (Jaques Cousteau’s famous boat). The fishing fleet still operate of La Rochelle in the waters of the Bay of Biscay. It provides fresh seafood to the restaurants which overlook the harbour at La Rochelle. 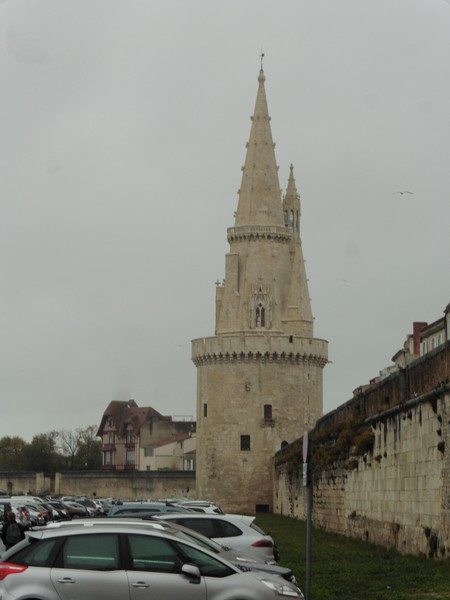 The city itself has maintained its ancient charm with the retention of its lovely old buildings. The city centre has a large pedestrian only area which is surrounded by buildings some of which date back to the Middle Ages. Many of the buildings in the central area feature covered walkways and stone arches. 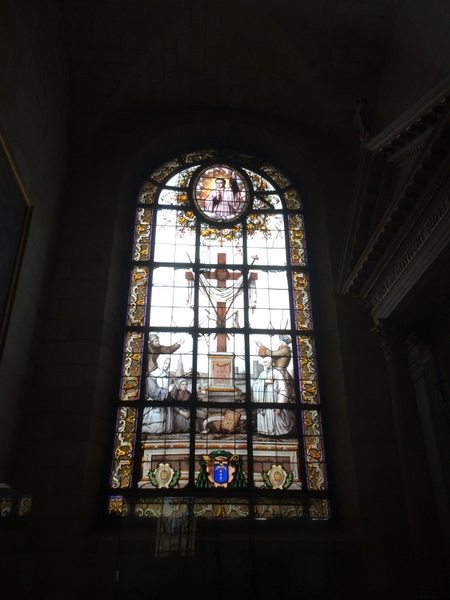 We visited Saint Louis Cathedral on the edge of Place Verdun. Despite the size of La Rochelle, St Louis cathedral is a fairly plain and simple building. It was built in Neo-Classical style with work commencing in 1742. It seems quite late however, La Rochelle had been the site of iconoclasm and religious wars which had destroyed many church buildings. Also the French Revolution had also seen destruction of churches.

The bell tower, dating from 1152, which stands next to the cathedral belongs to the church of St. Barthélémy. The church was destroyed during the religious wars. The bell tower was used as a gun tower against Louis XIII’s army when they laid siege on the city in 1627.
Inside the cathedral the row of Neo-Classical arches lining the nave are quite an interesting feature. With a raised keystone in the middle of the roman style arches they’re quite imposing. They look like a line of Arc D’Triomphes.

Another feature is the Neo-Classical arched windows with stained glass in maritime themes. The altar and chapels are quite plain with just a little gilding reflecting a more simpler design than earlier baroque architecture. 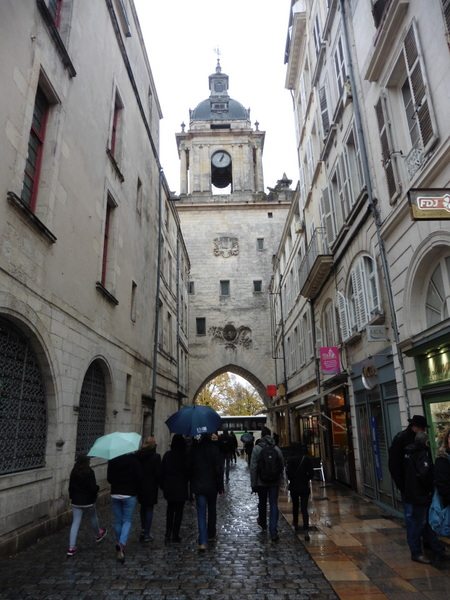 Around the Cathedral are many lovely buildings that predate the cathedral. They’re now home to restaurants, cafe’s and specialist shopping. The shopping area is quite extensive and includes all the major brands and some of the lesser known shops.
We arrived on market day when many of the side streets were a sea of different coloured tarpaulins. It was a lively market where vendors sold wine, cheeses, local handicrafts, fruit, vegetables, spices, fish, meat, clothes and all sorts of things. It’s always fascinating visiting markets in other countries just to see what people buy and sell. 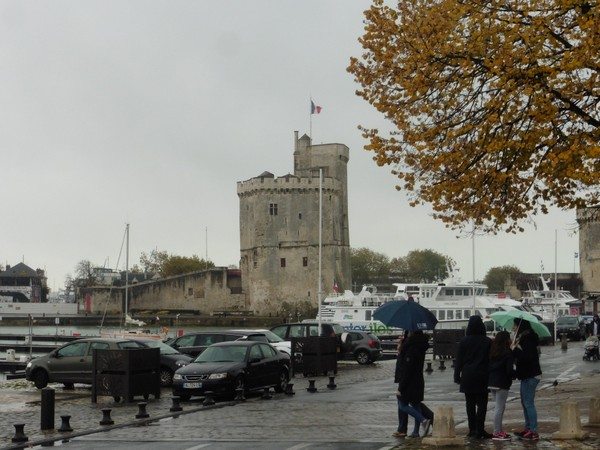 The shopping area leads towards the old port where the old fortifications and city gates have been retained. The Saint Nicolas, Chaîne and Lanterne towers date from the 14th century when they were built to protect the port. During the 16-18th century they were converted to prisons to house Huguenots and foreign sailors.

Around the port there were heaps of seafood restaurants serving the latest catch of the day. One of the most popular meals along the coast of France is Moules and Frites (Mussels and French Fries) and most of the restaurants advertise them as a lunch special. Being on the Bay of Biscay the freshness of the seafood is guaranteed which we took advantage of. Despite the cold weather a big pot of mussels was just the ticket at lunchtime.

The best thing to do after a big pot of mussels is cheering the Australian Wallabies on to victory. A local Irish pub filled with French people witnessed two Aussies in full voice as the Wallabies came from behind on the scoreboard to snatch victory from the Scots. It was truly magical. Our plans for the afternoon went out the window as we cheered our team on.

Late in the day we headed back to our apartment at La Pallice. Tomorrow we head to Bordeaux which should be great.