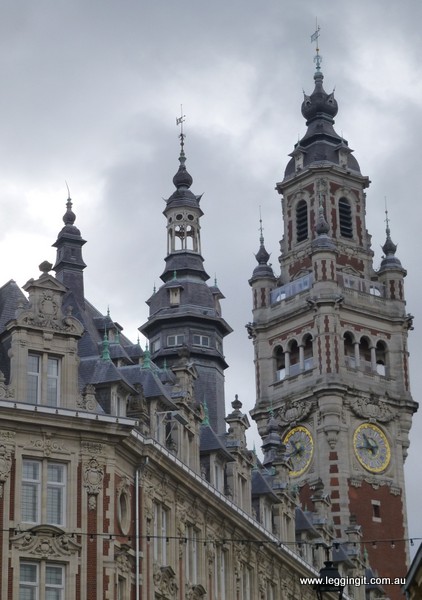 Leaving England heading to Lille in France wasn’t much fun. While it was only a two hour run down the motorway to Dover but the whole way we were buffered by squally winds and bucketed by rain. Arriving in Dover we were blessed however with clear sunshine. We were stopped for a random vehicle check and the two policewomen were really nice. We told them of our plans while they checked our panniers and they were pretty impressed. They wished us well for our journey and soon we were on our way.

The ferry ramp was pretty slippery but we were lucky to be first on. The crew directed us to the motorcycle tie-down area where they soon had the bike strapped in and we were peeling our wet weather gear off as we made our way up to the main deck. The cafe was almost deserted so we had no trouble finding a table. The English Channel was pretty rough and after the wet ride down I don’t think Michele was loving the beginning of the trip at all. We had some soup to warm up before sharing a lasagne and salad. Then we found a lounge and had a sleep. It was just what the doctor ordered, as less than two hours later we woke feeling quite refreshed as the ferry was arriving in Calais.

It was bright clear sunshine in France but the wind was so gusty we were lying down on the bike to minimise our sail effect. We took the motorway to Lille and as we were being buffeted by the wind cars zoomed past oblivious. Riding into Lille was pretty nice with old French buildings and an arch surrounded by cobblestone pavement. The Youth Hostel was in an old former maternity hospital and still looked like it. We had a room on the first floor which included three single beds and a shower and a short walk to the toilets. It was quite reasonable at 44.50 Euros a night. There was a small kitchen, a TV room and a computer and free WIFI on the ground floor.

We headed out to visit our couchsurfing friends who had just had a baby. It was really nice to see them and of course have a cuddle of their lovely new addition. We enjoyed a wonderful dinner they had prepared then said our goodbyes with plans to meet the next afternoon for a look around town. Heading back to the hostel, locking the bike to a pole in the carpark at the rear as the area looked a bit dodgy with graffiti everywhere.

The next morning we headed out on foot to explore the centre of Lille. It has a large cobbled square surrounded by beautiful old buildings. The weather was a mixed bag with brilliant sunshine, blustery winds and rain. While wandering around the centre we spied an Australian flag on the back of a bike being pedalling in front of us. When they stopped we caught up with them. We had a chat, soon discovering that Chris and Marg were from the Sunshine Coast. They were spending seven weeks riding around in Europe (those crazy Australians) and had just pedalled from Amsterdam battling winds all the way. We sympathised with them as we’d been in the same boat, however Chris had been blown over a few times (pretty scary stuff) Michele gave them a hand with their Satnav before wishing them well on their travels.

We then headed to meet our surfers and spent the afternoon experiencing and tasting the delights of Lille. It truly is a beautiful place and we look forward to visiting again.