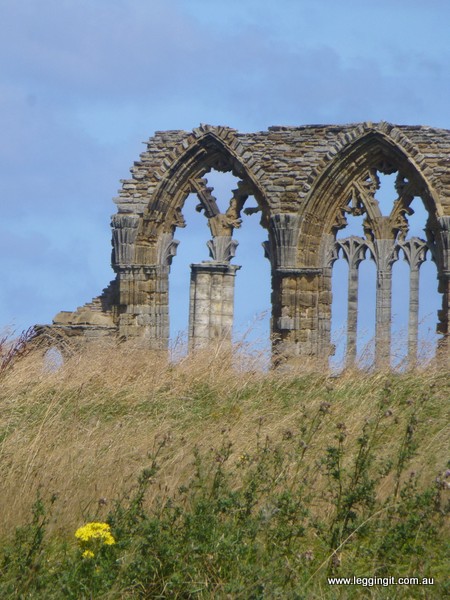 Unfortunately we couldn’t extend our stay at Granville Lodge as a bus tour had booked in so we settled on legging it up to Whitby which was only 25 miles away to check out Whitby Abbey and sample Britain’s Best Fish and Chips.

The weather was a bit overcast, with occasional showers and the wind blustery but it sort of fitted the countryside we were passing through. Moorland stretched out into the distance and occasionally we’d pass walkers dressed in their rain gear out for a walk on the moors. After all the green countryside further south it was almost an alien landscape, barren of all trees just short purple scrub. It was quite obvious that this countryside was a place where the weather could change quickly and if you weren’t prepared you could end up in trouble. I also had visions of an old craggy man from Scooby Doo pointing his craggy finger and saying “I would’ve got away with it if it wasn’t for those pesky kids”

The weather cleared as we reached Whitby and we headed up to the abbey. The Abbey is a ruin but it’s claim to fame is that it’s the inspiration of Bram Stokers classic tale “Dracula”. Being a fan of the book we really wanted to check the place out but the admission fee of £7 or $14 each was ridiculous. The entry was especially high when the views from the fence line were so good your would not see any more by paying so a few pictures over the fence and we saved the money for a cup of coffee.

Whitby is set around a small river with massive sea walls protecting the harbour from the storms quite famous in the North Sea. The hills leading into the town are quite steep and if it snows are un passable so the locals find a nice pub to wait it out. It’s probably the place where the song “Let it Snow” drew its inspiration. Whitby was packed with people and it was a bit hard even finding a parking spot for the bike.

We of course forgot which shop won best fish and chips so just picked one which seemed popular. What a cracker of a meal. We were even treated with “bits” (the pieces of batter which fell off the fish) which seems to be a local thing.

The town was beautiful with lots of quaint little shops, pubs and jewellers selling Jet a local stone, probably where we get the term jet black. Captain Cook the Englishman who claimed Australia has a statue on the cliff overlooking the harbour. A small replica of the Barque Endeavour lies in the harbour and there’s a museum on the site where he stayed for a while. Whilst we were wandering about we noticed a few young goth like people dressed up in black with blue faces and bells on their boots. It was sort of like Dracula meets Braveheart. We were still wondering when we noticed a group with multi coloured clothes and painted faces. Obviously something was going on so we decided to ask.

We’d wandered into the Whitby Folk Week celebrations. The Braveheart Goths were actually a group of Morris Dancers from Sheffield. The local tourist information had a program of all the folk acts taking place in the different venues. As we left the tourist office the first group were just starting, country dancing dressed in almost Quaker like outfits. Men in wide brimmed tall hats and women in bonnets. They were followed by a large group of ladies, in beautiful green dresses and shoes with thick leather soles. The clog like shoes really clicked on the cobbles as they danced about forming all sorts of patterns. A mixed group of men and women, followed them then six Mabel’s armed with a double handled cheese knife. These six ladies turned and twirled making patterns with the interlocked knives. It was an outstanding display of intricate moves and dance. At any time we expected blood to start flowing as the knives moved over their hands and interlocked to form shapes.

The Sheffield Morris Dancers were great fun with shaggy style black coats covered in little blue and silver shiny discs, blue and white faces, top hats, boots, bells and sticks. They performed to the sound of drums, fifes, and accordion a few dances with clashing sticks and lots of movement. It was great to see young people have got involved in Morris Dancing and have given it their own twist. A lone tap dancer with the traditional shoes carved it up clicking his shoes on the pavement. His fancy footwork was amazing.

After about an hour we headed off and noticed a river cruise for £5.It was a nice little trip as the sun was shining and as the sea was really rough they stayed inside the harbour wall. At the harbour entrance they boat slowed and the skipper pointed out the statue of Captain Cook overlooking the harbour. Not far from the statue a pair of whale jaw bones formed and arch and reminded everyone of Whitby’s early association to whaling. The boat hung around and pretty soon a black head appeared above the waves. It belonged to Sammy The Seal, a local favourite. Further up the river we passed under the swing bridge, passing the Endeavour replica and Captain Cook museum. There were lots of picturesque old buildings lining the river.

After the cruise we stopped at a little pub we had noticed earlier called the Golden Lion. It had two little bars no bigger than our lounge room and as we entered we were wondering whether we’d be able to fit as there were already about 8 people it the place. There was one table spare so we squeezed in and started chatting to two blokes from Sheffield. They were a funny pair who’d popped up for the weekend. As we were chatting people with squeeze boxes, flutes, ukes, and bells on their legs started filing in. The sign outside said musicians welcome so the Whitby Scratch Morris group came in. We spent the rest of the afternoon singing, laughing as one after the other they played and sang old folk songs and some parodies of famous songs. There were songs from the pits of Yorkshire which were really hilarious but”I’m Forever Blowing Bubbles” (a song about flatulence) had tears rolling down our cheeks. The follow up of “16 Stone” ( to the tune of 16 Tons) complete with dancing left our jaws sore from laughing so much. The two blokes from Sheffield by the end of the afternoon were three sheets to the breeze. Every time they tried for the door the band would start up with another ditty so they just couldn’t leave. Eventually while the band were changing instruments they staggered off.

Pretty soon it was almost night and we still hadn’t organised a room so we had to bid our goodbyes. We did a round of the town and soon discovered all the hotels we’d passed earlier now had their No Vacancy signs out. Luckily we found a place quite close to the centre. We returned to the centre had an ordinary meal at the flashiest restaurant ( the one that won the best fish and chips) ,sometimes you can’t beat the humble takeaway. Then walked out on the sea wall checking out the lighthouses and the amusement areas on the promenade.

They train their kids early to gamble here with wall to wall coin machines. The heavens opened up so we headed back to the amusement area for a game of putt putt hoping to wait the storm out. This storm just got harder and harder. As there seemed to be no let up eventually we just got on the bike and headed back to the room. Tomorrow we head to Scotland. 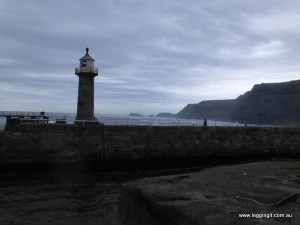