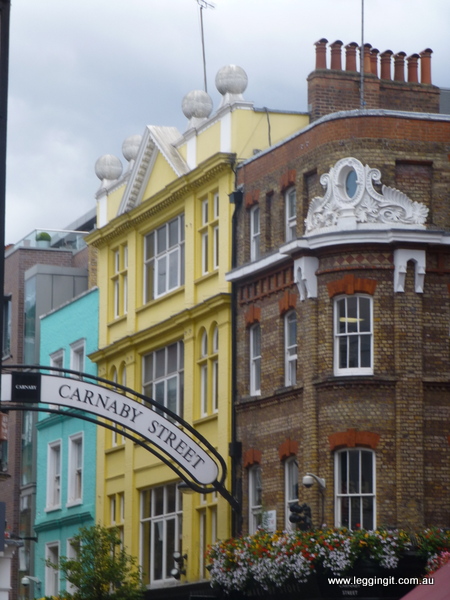 It’s funny how when you travel and visit a place or sometimes even live in a place you walk down the streets not realising the history which surrounds you. Today was one of those days where we stepped back in time and trod in the footsteps of British Rock and Roll legends. We legged it to Tottenham Court Station from nearby Oxford Street where we met Malcolm, from Rock and Trips, heading off for a 2 1/2 hour walk around some of the most historic places of Soho.

From the 50’s until it became an upmarket suburb, Soho was renowned as a sleazy area full of bars, brothels and run down buildings. Doesn’t sound very glamorous but it was here that British Rock Music was born.

Around Soho there were heaps of venues some like the Odeon, Ronnie Scott’s, Marquee, the Palladium, Whisky A Gogo and a lot of venues both big and small, many of which have since vanished.

It was funny hearing how 100 Club was where gobbling by punks first started with a band called Rat Scabies and Sid Vicious invented the pogo jumping up and down trying to see his favourite band. We even stood on the stage where the Sex Pistols performed their first gig (its inside a book store in the children’s section these days, which is quite funny in itself).

We learnt the meaning of the Old Grey Whistle test (also the name of a music program which ran from 71-88) and Tin Pan Alley….

There’s still a few music shops in Tin Pan Alley but in the 60’s we heard how one had recording studio in the back where some of the famous songs were recorded in Mono. This street was also the site of the birthplace of the Wah Wah pedal,d and future rock and roll legends had their first jobs in local cafe’s, record shops and music stores. The first rock and roll magazines were launched in the street and teens at the time checked out their favourite bands, and checked the pop charts.

Trident Studios still have a sign out front proudly announcing to the world the songs they recorded and the stars who sang them.

We walked down Carnaby Street, stood on the street where the album cover for Oasis’ album “What’s the Story (Morning Glory)”was taken, and under the street light where Ziggy Stardust came to earth. These days between two trendy outdoor restaurants.

We ended our tour where on the 30th of January 69 the neighbours reported a disturbance on the roof. The police arrived to find the Beatles performing their last ever public gig. When we watch the film clip of “Get Back” we’ll think of this place.

It was so much fun legging it around the streets and alleys of Soho with Malcolm at Rock and Trips. The sights and stories with so much information and facts of which I’ve shared only a few which I hope I’ve remembered correctly.

If you are going to London be sure to give Malcolm a shout and join his tour or even his Beatles one so you can find all these hidden gems too. His website is linked here