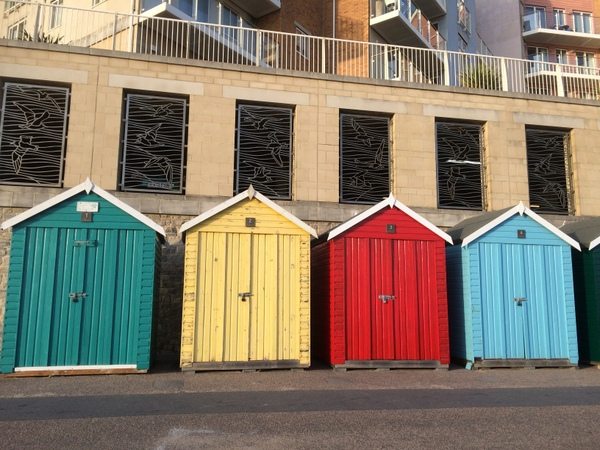 One thing we’ve learnt since being on the road is. Whenever you’ve got an early start there’s always a neighbour who’s up half an hour earlier crashing around. That was our experience this morning in Boscombe. Once you’ve been woken up you might as well get moving. It’s not likely that you’ll be able to get back to sleep for the 30 minutes you’ve been robbed of. Then it was hang around watching Border Security until the planned time of departure. We didn’t want to arrive too early and be standing around in the cold.
As we’d already packed the top box last night his mornings pack was pretty quick. It was just a matter of folding the bike cover, clipping the tank bag on and then strapping the gear bag to the top of the top box. Within minutes we were on our way. 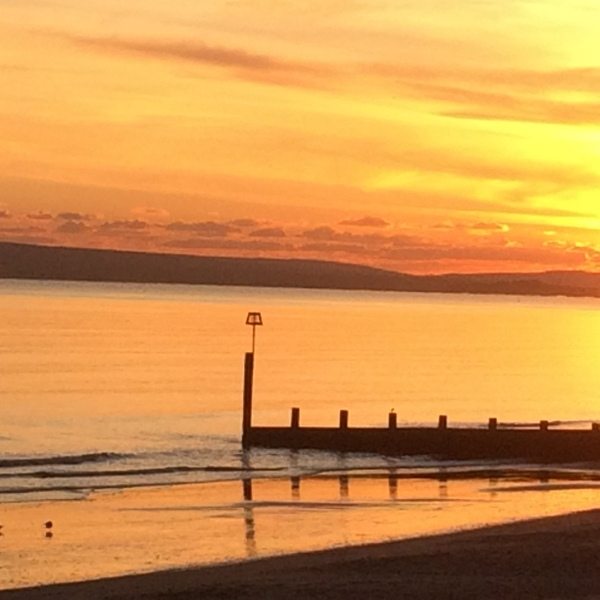 As sunrise isn’t until about 7 ish it was still dark whilst we packed the bike and set off. This is actually the sunset from the night before but it was too nice not to share  🙂 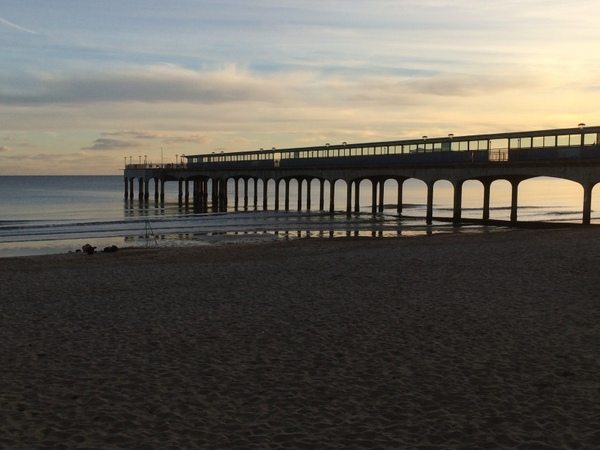 The road from Boscombe to Poole seems to go way out of town before it cuts back. It’s the strangest road set up, although the two towns aren’t that far apart. As there were no signs indicating the port we were starting to get worried that we’d gone the wrong way.

Eventually once we arrived in Poole we found a sign and followed the directions to the Poole Ferry Terminal. At this time of year the ferry from Poole to Cherbourg runs intermittently so we had to plan ahead to catch it. The customs and police check was really thorough which left us wondering if the smaller ports are cracking down. Our bike luggage was checked and we both were body searched which came as a surprise. As they didn’t find anything we were waved on our way. 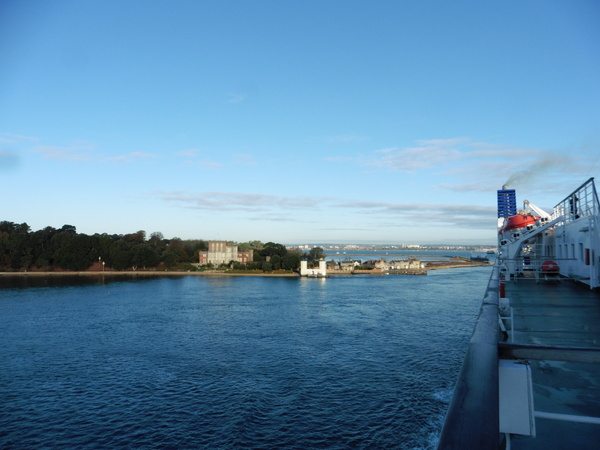 Eventually the ferry started loading and we were ushered to one of the upper vehicle decks where we were greeted by two crewmen waiting to strap the bike down. Pretty efficient service. We just parked the bike and left them to it. 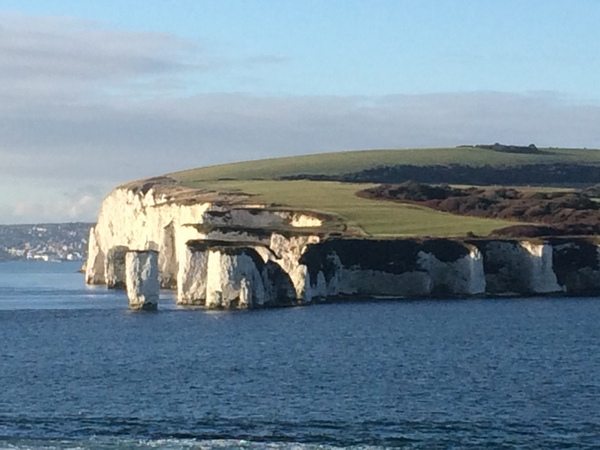 When the ferry left the terminal we were treated to some spectacular views of Britain’s most scenic port. Along the coast were stunning white cliffs with chunks of land jutting out from the sea. It was just magical.

The crossing from Poole to Cherbourg takes approximately 4 hours, so after a bit of coastal sightseeing to the cafeteria we adjourned (a word Michele was trying to spell for someone on the bus last night. He was giving a court status to a mate and couldn’t spell it. Eventually instead of adjourned he wrote “ad journey”….near enough).
It’ll be at least eight months until we will be back in Britain so at the cafeteria onboard we were able to enjoy our last Full English Breakfast. At this time tomorrow, we’ll be eating croissants and drinking bowls of milky coffee for breakfast.

The ferry was pretty empty so the rest of the journey we spent just playing cards.

Arriving at Cherbourg, it seemed an interesting port with its outer breakwater and remains of fortifications. The port looked almost abandoned. Although it is Saturday the only boats about were two coast guard cutters riding at anchor. Once the ferry docked we were soon on our way. It seemed like we were going to enter France without passing through customs, however, we soon reached a police checkpoint which sent the customs officials scurrying to find a stamp to stamp our passport.
We skirted around Cherbourg and headed into the countryside through little villages. It was a nice ride down narrow lanes lined with yellow and red autumn coloured trees. We passed through little villages of grey stone buildings, tall spired churches and cream coloured houses. It was all so typically French and so wonderful to be back. 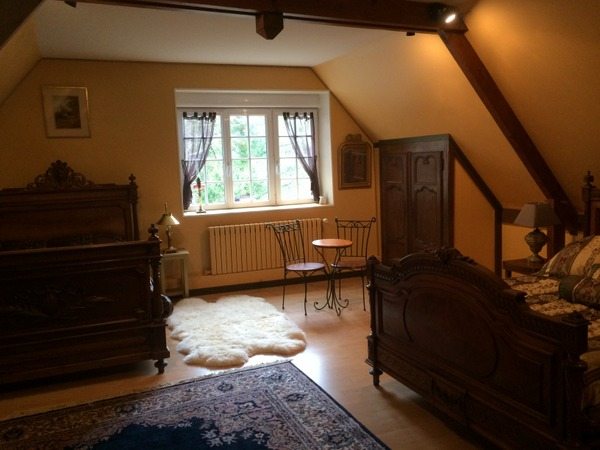 Tonight we are staying in the country at an 11th century Priory which has been converted into a B&B. The setting is quite rustic with farm buildings surrounding it and cows grazing in the surrounding paddocks. The conversion of the Priory is really nice as they’ve retained many of the old features including the former chapel, arched doorways and windows. 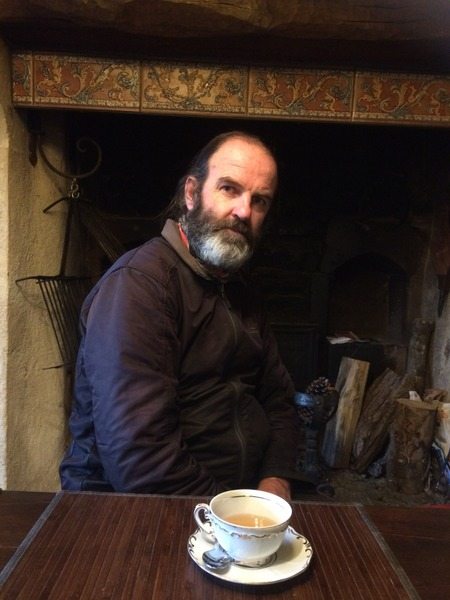 The interior is fitted out in traditional French farm style with a wood stove in the kitchen and large bedrooms. It really was quite beautiful. Unfortunately we are only staying overnight as we transit towards the Dordogne region.