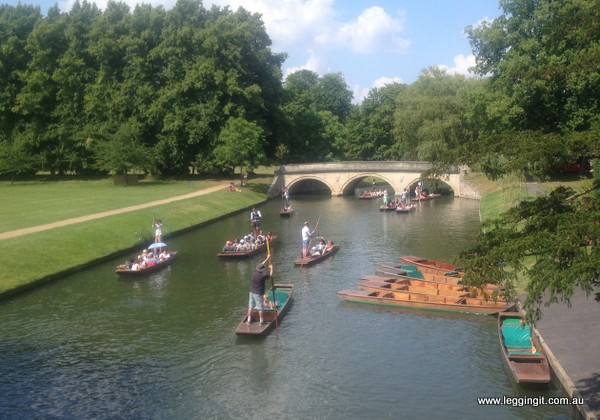 Michele lived in Cambridge for a few months when she was on her working holiday in the UK many years ago so was keen to revisit so we head off to have a look around.

Taking a mixture of highways and side roads it took about 2 hours to get there we rode around trying to find something that looked familiar…this was not to be but we did end up riding through one of the many Pedestrian Streets send them scattering lol.

We found a spot to park the bike and walked in to the main part of Cambridge. As it was lunchtime we stopped at a community café where the staff were both people with mental health issues and volunteers. It was a lovely place with a courtyard and good food.

We then wandered into a couple of colleges and chapels, enjoying the old buildings and their ambience. One thing that has changed since Michele was here was the bigger Colleges charging an entry fee to visit.

It was a stunning day and we were standing discussing the merits of visiting Kings College when a young man offered a punt ride along the river. This is actually one of the things Michele wanted to do so we agreed at a cost of $30 each for an hours tour. We had time to kill so went for a wander to the market place and wandered some of the back streets.

Beck in time for our tour we joined a small group and wandered towards the river. What We hadn’t realised was how low the punts were.. Michele nearly had a fit but as most things that have challenged her on our trip it was not as hard as she thought it would be.

The student who was punting for us gave us a commentary about the river and he history of the Colleges along the way. It was a beautiful way to spend an hour although a thousand other people had thought the same thing and the river resembled a peak hour freeway. Punts everywhere, some being punts by tourists who had no idea and were crashing into everyone nearby, hence the warning to keep your hands inside the punt.

After our tour we wandered again finding the Round Church. This is fascinating building that now houses a interesting display on Christianity and the history of Cambridge. It was well worth the entry fee however Michele got a bit frustrated when they seemed to manage to justify everything in history Christians had done even alluding to slavery as being ok as it was part of a learning process for humanity…not sure those who were enslaved would feel like that.

It was then time for us to head home…the plan was to visit the pun where Michele had worked but the satnav was not playing the game and we ended up in an outer suburb miles from where we were supposed to be.

For Michele it was a surreal experience returning to Cambridge, she was there in Winter and there were hardly an tourists so it looks completely different with the place teaming with bus tours. That said it was an enjoyable day almost like visiting somewhere completely new 🙂