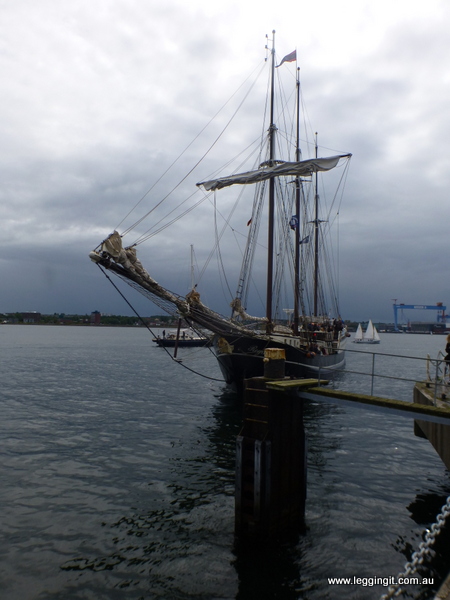 We started our visit to Kiele Woche (Kiel Week) by headed out to the Olympic Sailing venue where there were all sorts of sailing craft racing. There were even tall ships racing. We checked out the beach boxes which is quite popular in Germany. The beach boxes are made from wicker cane and can fold down to close open halfway so they are an seat with a roof or open all the way open like a double bed. 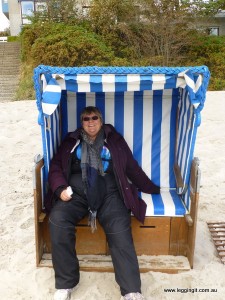 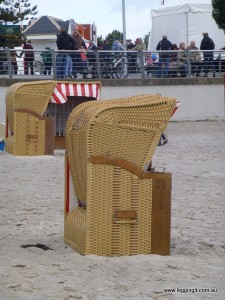 The waterfront is filled with stalls selling all sorts of food, one in particular which caught our eye was a lights house with men cooking fish on the upper level and putting the cooked product into a spiral chute sliding it down to the bottom level where it’s served up. Of course there’s the German voice booming out of the speakers “lecker, Lecker , lecker” (delicious) enticing everyone to try the famous Backfisch.

There’s heaps of stylised stalls and of course beer stalls absolutely everywhere playing polka drinking music. There’s a real party atmosphere which is typically German.
We took a break to check out a German polka duo in traditional lederhosen playing guitar and piano accordion. The music was pretty addictive and after every song they’d play a tune which must have been the traditional drinking song because at the end they’d say “eins, zwei, drei, zu fai …..Prost …and everyone would raise their glasses and chugalug.

There were stages set up in all different areas with different bands and music playing from German/English rock and roll to sea shanty groups.

All sorts of water sports were held throughout the city from formula 1 style boats, wake boarding, yachting of all classes, tall ship racing, kayak water polo, and kiddy zodiac races. The Navy and Search and Rescue are quite involved as well with demonstrations of rescues using boats and helicopters. Lots of international Navies attend Kiele Woche and there are huge lines of people waiting for a visit to the open ships. Lots of the ships and ferries offer cruises and its a great way to see some of the activities close up. There was something for everyone. There was even an extreme sports area where “nutters” on bmx bikes or on skateboards with sails attached raced down a ski ramp doing flips before crashing into the harbour. It was really fun to watch.

The kids section had some cool games including people Foosball, so instead of the table game people were inside an inflatable field and were attached to poles across the top. It was fun to watch.

The international food fair caught our eye as a local German butcher had set up an Australian Stall selling kangaroo burgers, lamb and rump steak. They also were selling strawberries with cream, Fosters and Bundaberg rum with orange ( a traditional Australian drink….err not). The local paper said they couldn’t find any Australians to work at the stall and we thought we would lend a hand. We talked to a young bloke working there and discovered he was a local surfer who’d travelled around in Australia by van so that was near enough so we got out of working lol

One night we attended the Balloon glow. If the weathers ok they have an annual balloon race in Kiel. Part of the celebrations is the balloon glow where competitors line their balloons up and using the burners put on a spectacular fiery show accompanied by music.
The night we attended was quite windy so they only set up balloon baskets but it was still pretty spectacular with huge flames shooting out of the top of the burners. They finished the night with a really cool fireworks display including some fireworks we hadn’t seen before.

We spent three days wandering around Kiele Woche picking different areas each time to focus on and we still didn’t get to every section.