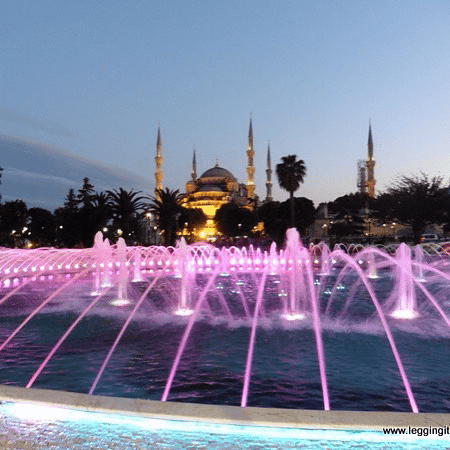 After a day out cruising the Bosporus, we headed to Hagia Sophia as all museums were free tonight. A long line stretched up the street from Hagia Sophia almost to the tram stop. Eventually, we made it through and entered.

Hagia Sophia was built in 537 AD by Roman Emperor Justinian as a Christian cathedral and for 1,000 years was the largest ever constructed. After the Ottoman invasion in 1453, it was converted to a mosque and rather than remove all the mosaics they were simply plastered over. Hagia Sophia was opened as a museum in 1935 after President Mustafa Kemal Atatürk, the founder of modern Turkey, decided the building was too culturally significant to remain as a mosque. During the conversion process, the plaster was removed from the mosaics and the carpets removed to reveal the marble floors.
Currently, restoration is being conducted so massive scaffolding is erected inside stretching up into the upper gallery.
Inside it’s an interesting building with a mixture of Christian mosaics and Islamic art. In some areas, the plaster has been removed to reveal pictures of Christ and various religious figures whilst in other areas the calligraphy art has been maintained. Huge Islamic discs with the names written in calligraphy hang from the walls and huge light chandeliers hang from the ceiling. At the rear of the main room, large urns carved from a single block of marble are featured. Also on the ground floor a wishing column which a long line of people was gathered at. Legend has it that St Gregory appeared at it and if you touch the column your wish will be granted. A copper plate with a hole in it covers the section of the column and locals believe if the put their hand flat on the plate with their thumb into the hole and are able to turn their hand around the full 360 degrees their wish will be granted.
Also on the ground floor, the Mihrab has been maintained along with the sultan’s wooden prayer platform. We took a series of ramps up the tower to the upper gallery which gave us a view of more mosaics and the early designs on the ceiling. On one of the handrails of the upper gallery Ruinic graffiti of a Viking guard was an interesting feature. From the upper gallery, we had a great view down over the interior of the building. Seeing it at night lit only by lights it had a great contrast of light and shadow. Overall it was quite an impressive building and well worth the visit. 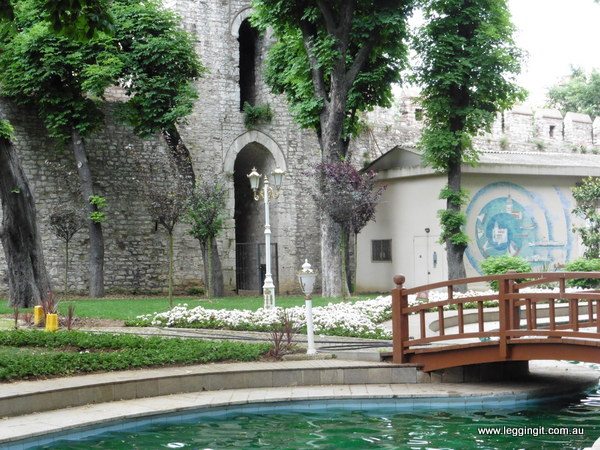 After visiting Hagia Sophia we made our way to Topkapi Palace Museum and joined the queue of people waiting to enter. Timing is everything because just as we reached the gate the guard said the gate would be closing in five minutes. Sure enough, we’d just got inside when they were closed. After passing through the scanner we entered the grounds. A few of the buildings were closed for renovations but we found a few worth visiting. The first one we visited had a collection of sarcophagi from all over Turkey and even a few from Egypt. The sarcophagi carved from a single block of marble are just stunning. Also, there was a large collection of pieces of carved marble recovered from Roman ruins. On the staircase leading to the second floor, the head of Medusa guarded the stairs, not a pretty sight at all. The second floor contained more items from ancient Turkey including clay tablets inscribed in Hittite. After a quick look around we returned to the main square almost falling over in the dimly lit area. In the gardens of the square, we discovered a collection of columns and Roman statues including another head of Medusa much like the ones in the Basilica Cistern we visited yesterday. As the museum was closing we had a chance to visit the ceramic collection. It was an interesting mix of glazed tiles, plates, jugs and urns with a few of each featured in different rooms.

As we have to up very early tomorrow we cut our visit short and headed for the ferry. Along the way, I rolled my ankle in a gutter and hobbled the rest of the way to the wharf. After a short ferry ride and a walk, we were home to the unit. Tomorrow we say goodbye to Istanbul as we leave Turkey to head to Bulgaria.