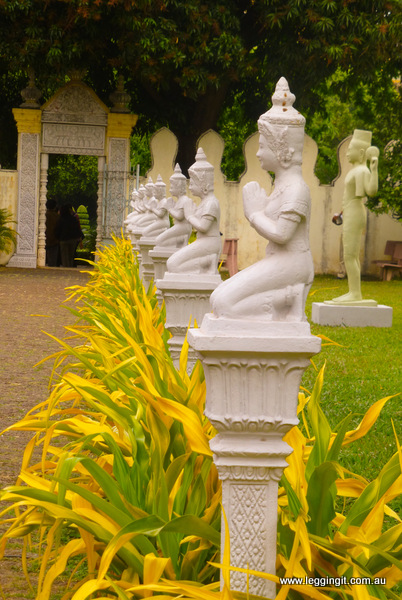 We started with a trip to the Silver Pagoda in Royal Palace of the King. It’s interesting riding through Phnom Penh with traffic just pulling out from side roads, people riding the wrong way up the streets. I think only way to ride is concentrate on self preservation and just give a little and it’ll be all good.

Some of the tips I learnt at Gibbo’s Motorcycle Training Rockingham come in handy because I think I’m the only one in Phnom Penh doing head and mirror checks. We parked the bike and the police said they’d watch it for 2,000 Riels, bargain.

The tickets cost US $13 for two and we joined the crowds wandering around this spectacular palace. The gardens were beautiful with manicured trees, pots with water lilies and not a leave out of place.

There were a couple of buildings which were of significance. The Royal throne room with golden throne, golden crown umbrellas and golden statues of former kings. The silver pagoda, paved with silver tiles (held down in places with masking tape, they need a better tiler) which is home to all sorts of silver Buddha statues encrusted with gems and diamonds, one which weighs 90 kgs. It’s also home to the emerald Buddha which sits atop a golden pyramid and is translucent in the light. There were lots of Buddhists praying but no monks.

A house made of steel and tin, a gift from Napolean, looked strangely out of place amongst the high golden tiled roofs. It was in poor repair and was currently undergoing renovations so was screened off. There was also a shrine with a bronze cast of the Buddhas footprint. There were rooms filled with silver, gold, emerald Elephants of all sizes. There was also a white elephant room, but we couldn’t find a Leyland P76 inside.lol

Overall it was a really nice way to spend a few hours, even with all the bus tours and tourists there were places where you could escape and enjoy the tranquillity. The only places which needed work were the pavilions, with a lot of the painted historic scenes in a poor state.

We returned to the same place for breakfast but sadly it was a disappointment so we will have to find somewhere else tomorrow. After breakfast we found an Internet cafe and made a VOIP call to the bank. We’d called first thing this morning and used up all our credit waiting on hold and calling numbers on the back of the cards which don’t exist. We spent 53 minutes on the phone being switched back and forward between different bank staff, telling them all our latest transactions, dates of birth, full names and account details and at the finish we were told give it 5 minutes and it’ll work. After a coffee we found it didn’t work. We headed back to the hotel and stopped at an ATM on the way with no joy. We went inside the bank and they informed us the daily limit on debit cards was US$150 and on Credit Cards US $450. We went back out to the machine and voila we got some money, yahoo.

We celebrated with a Swensons Icecream sundae and then spent the rest of the afternoon, chilling, catching up with the blog and a quick dip.

Now we know we have our money sorted we can visit some of the places we have been putting off.