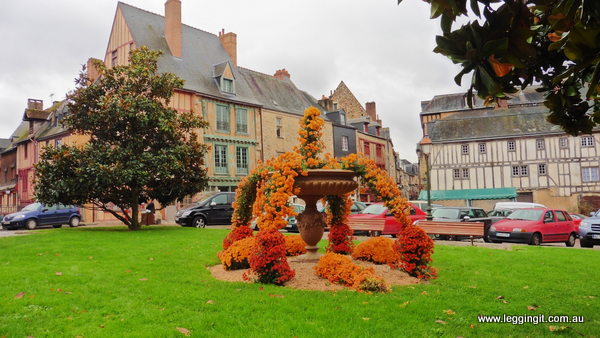 We started our day in Le Mans with a €5.40 French breakfast at Mr Bed, which was pretty good, croissants, pain chocolat, breads, cakes, cereal, yoghurt, juice and coffee. Afterwards we packed the bike and headed to the Le Mans Tourist Bureau.

The ride into town took us through old and new sections of the city. It’s a nice ride which crosses the bridge through a Roman wall of the old city, between a floral lined underpass and up into an ultra modern city. The Tourist Bureau in Le Mans is probably the most professional we’ve seen so far and we soon had maps, brochures, recommendations and instructions on how to get there. It was really impressive.

Our first stop was Notre-Dame De La Couture Church, which also houses St Bertrands tomb. The church was quite unusual with different roof-capping on the two towers of the facade. It was like a hasty repair which never was repaired properly. Inside the church the different building periods of the church were easily visible with painted columns and arches close to the entry and roughly bricked up sections of the walls. Some of the nooks must have contained icons as they had kneeling stools and some of the rough looking walls had large paintings hanging on them maybe in an attempt to cover them up a bit. Further into the church there were fabulous old polyptychs adorning altars carved from the finest wood. It has fabulous high ceilings and clear windows at the font to lighten and fill the place with light and some beautiful stained glass at the rear.

Judging by the amount of locals coming and going this is a popular church with lots of seats which would suggest that there can be massive crowds here. It’s quite understandable as although it may not be the prettiest it is one of those places which have a real spirit.

We headed back through the city to the Cathédrale Saint-Julien in the old city.
The Cathedral is dedicated to St Julien the first evangelist of Le Mans whose relics are housed in the sanctuary. There’s been a Christian church here since the 5th century but the current cathedral was started in the middle of the 11th century and was enlarged, rebuilt, enlarged, rebuilt until the 15th century. The early neolithic inhabitants of the area also considered the site as special for outside the church a standing stone “menhir” strangely human shaped. The Christians had a cross mounted on top of it when they christianised the locals but that has since been removed.

The cathedral is truly a work of art with thirteen flying buttresses holding the walls of the chorus area up, and thirteen separate chapels attached to the building. Walking inside we got a real feeling of the majesty of the cathedral, with massively high ceilings and some of the most spectacular stained glasswork including one dedicated to Joan of Arc. The angels painted on the ceiling of one the small chapels date from the 11th century. The only annoying part was that there were a number of school groups being noisy and blowing out candles.

The cathedral faces the Grand Rue, the former main street of the old city. The old city walls were erected by the Romans around 280 and are among the best preserved in the former Roman Empire. In true Roman Style the wall was built with a geometric pattern running through it. Over the years the walls were tested by Bretons and Vikings. These days twelve towers, 3 posterns, a gate and a bathhouse are still visible it really shows the Roman building prowess. Inside the old city walls there’s heaps of old medieval houses so we took a wander about the cobbled streets. Some of the wooden beams on the medieval houses were fabulous with faces, animals and grotesque figures ornately carved into them. We also learned the story of Geoffrey V “The Handsome”, count of Anjou who married Empress Mathilda, daughter of English King Henry I. The count was nicknamed after his habit of decorating his hat with genet flowers (broom flowers) whenever he went hunting in the local countryside. He planted genet in his hat, hence Plantagenet. The old Plantagenet Palace is still standing, having been turned into the Town Hall, but in its time English King Henry II was born there, and King Richard the Lionhearts wife died there.

After lunch in one of the medieval buildings housing a cafe we headed out to the Le Mans car museum or as it’s known locally Le Musée des 24 Heures, Circuit De La Sarthe. It’s not a cheap venture at €8.50 entry with an extra €2 for an audio guide and that’s just for the museum as the track and museum are separate entities. As it’s not my idea of fun I found a comfy seat and pulled out my book leaving Ron to enjoy it by himself.

The museum starts with the origins of motor racing, with lots of odd looking vehicles, and how the Le Mans was conceived. There’s a great exhibit of some great old support vehicles from over the years and another showing how the track has developed. There’s lots of old memorabilia, photos and stories attached to vehicles including how inventions developed for the racetrack have been incorporated into standard production vehicles. The original vehicles were just standard vehicles painted in their country’s colours, British racing green, red for Italy, and blue for France. The drivers were open to the elements driving some of the most basic machines. There’s heaps of Le Mans winners and it was interesting seeing the progression of vehicles over the years from production vehicles to today’s purpose built racers which now are painted in the colours of their sponsor. The hall of legends is pretty cool with stories of some of the legends of Le Mans, including of course Steve McQueen who finished 2nd in the race and brought us the Film of Le Mans.

By the time Ron had finished it was already dark so with light rain falling we headed onto the Loire valley to the city of Tours where we are staying for a few days with friends. It was so nice arriving at our friends which we met through Couchsurfing. The last time we stayed with Jean-Gerard and Elisabeth we were both violently ill for 24 hours, but this time we are looking forward to our visit and feeling in good health.