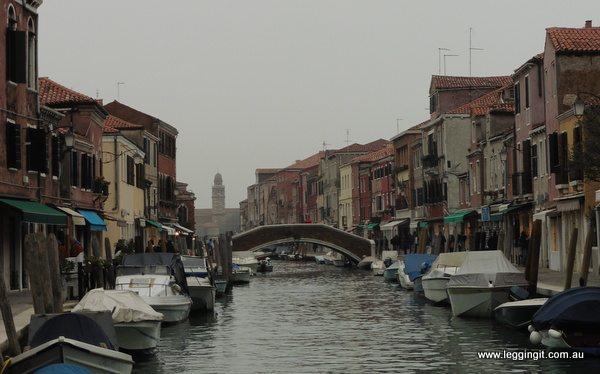 It was sad this morning to bid farewell to Christiano because we’d really enjoyed our stay. He’s a great host and really gave us some great tips to get the most out of our visit to Venice. 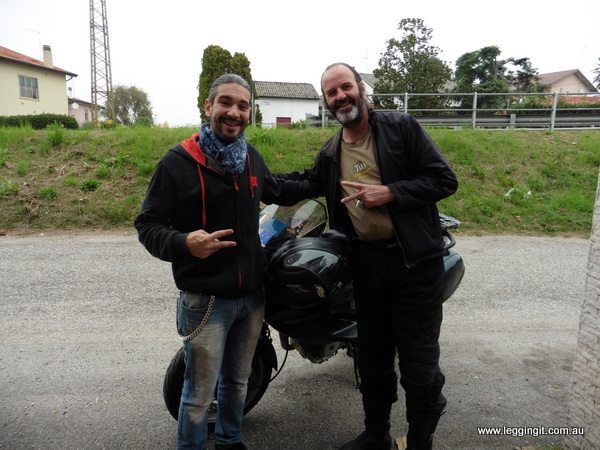 Heading out of Venice was a little slow with traffic but once we hit the SS14 we were really going to eat some miles up……wrong. Out near the airport near Ca’ Noghere there was a road closed sign but in true Italian tradition there was no detour signs. We rode to the end of the road, and back up. Then checked small lanes to try and find a way around the road closure. They were all dead emds. Eventually we found a small road which took us through Zuccarello and San Liberale. We knew if we just headed east eventually we’d get back on the right road. It was nice riding as the weather was quite cool with nice dense cold air which makes the Princess purr. The countryside is quite interesting around here. It’s flat rich fertile soil so lots of big farms. There’s lots of canals and rivers so all the land is well irrigated. Comparing it to the north of Italy with all the hills with thin soils it’s a veritable fruit bowl. In the north there’s lots of small farms growing olives but down here it’s big tractors, wheat and full scale production.
Our lunch stop was interesting. It started raining lightly and as we were passing a bowling alley Michele said stop stop! 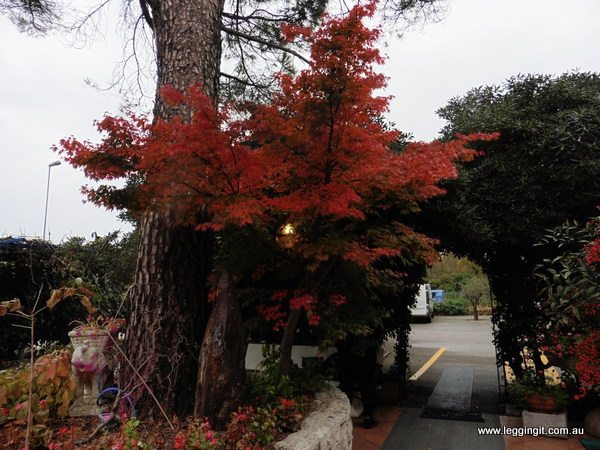 It was going to be the perfect place to take a break from the rain. Rattle a few pins, eat some hotdogs smothered in dead horse (red sauce). Just perfect……..if it was open!!!
Instead we found a fancy restaurant and parked the bike under a tree (to keep it dry of course). The food was ok, although a bit overpriced. The only problem was a bloody dog! A pair of peanuts err patrons turned up with fluffykins. Now we’re both dog lovers, me especially. However, we just don’t get the whole dogs in restaurants phenomena which is sweeping the world. We grew up with dogs in backyards, not being carried around in handbags. Well fluffykins got his own plate and the waiter had to cut his meal up into one inch squares. He shouldn’t have bothered because fluffykins didn’t have any table manners. Fluffykins just wolfed it down and then sat around for the next half hour whining. When he wasn’t whining he was barking at other dogs brought in by other peanuts err patrons.
The rain had cleared by the time we finished lunch so we made the final push towards Trieste.
Soon as we saw the signs to Trieste we knew we were heading in the right direction. The blessed god of acceleration was on our side keeping the Princess happily purring along. Meanwhile the Carabinieri were out busily catching the other speeding drivers and we rode happily by. We were pretty surprised when we reached Trieste just how massive it was. Somehow we missed the bypass and ended up going through the centre of the city. Then the rain started, just lightly. Great, so close to the destination.
The rain wasn’t too bad, well not heavy enough to make us stop and put on wet weather gear. Just enough to make the road a bit greasy and my visor a bit shitty from road grime.
Crossing the border at Muggia was a bit strange. A skinny little road led to an abandoned border post and then onto even worse roads. It was pretty countryside however with lots of hills and red dirt. As we arrived in Koper a guy sped up beside us blowing his horn and sticking his thumb up. Welcome to Slovenia…. Nice.
Our satnav went flat just before we reached Portoroź. After connecting the charger we discovered the B&B was actually on the hills overlooking Portoroź. After a ride up and down the road we found one road which petered out to a fence. We rode further up the hill to another road which was mega steep and slippery. At this stage Michele decided to stretch her legs and meet me at the top. The road was pretty agricultural, (ploughed up) and we arrived at the house. Well actually the house owner came out and told us that the house we wanted was on the next street. Head down to the big tree turn left, then left at the end, then straight ahead. Well it wasn’t much of a connecting street two ruts full of boondies. Soon we were at the B&B and what a ripper it was. The room was on the second floor, quite reasonable with chairs, TV and fridge. Outside there was a large verandah with great views of vineyards, olive groves and the bay. on the ground floor there was an outdoor area with TV cooking facilities, fridge. It was almost like camping with a decent bed.
First job break out the coffee pot and brew up! Yippee
We just wish we were staying here longer, because it’s a great setup. Maybe we might have to head back this way. Tomorrow we leave the Schengen Zone and enter Croatia.