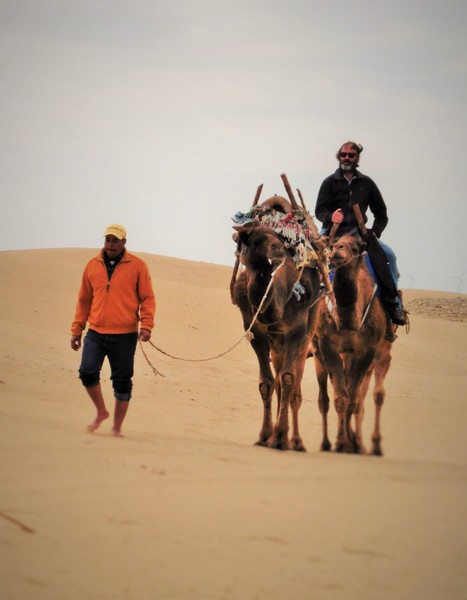 Every Wednesday we open Facebook to see numerous posts on ‘hump day’ celebrating the middle of the working week. As we do not have the ‘traditional’ working week being travelling bloggers, we thought we would do something connected to where we are at the moment Essaouira Morocco. So here it is Hump Day Moroccan Style.

Every morning since we have been here when we walk down to the beach we are greeted by a lovely Moroccan man ‘Abdul’ with a big smile, “Bonjour, Ca va, would you like to ride my camels?” Over the last week or so we have met his camels, Cappuccino, Chocolate and little Bebida. We have enjoyed chatting to him and learning a little about his life and his camels. We have also been watching how the camels are being treated to make sure we were not going to ride an abused animal.

Up till now we have avoided having a ride but today we had decided to enjoy ‘hump day’ Moroccan style, so replied ‘after breakfast we will go for a ride’. After enjoying our breakfast and watching the camels being prepared, we headed out for our ride. Michele was riding Cappuccino and Ron, Chocolate. Bebida was coming along for the walk as he was being trained by having an empty saddle on his back. All loaded up we waved goodbye to Abdul and headed off on our trek for an hour up the beach.

Very quickly Michele was reminded why she does not like riding camels, they really are uncomfortable as they are so wide. This was our third ride, one on Cable Beach in Western Australia when our girls were little, the second in Mongolia and now here in Morocco.

Poor Cappuccino was a bit excited as there was a female camel up ahead that was on heat so he was blowing his tongue and frothing at the mouth to show her what a strong male he was. He was also making a snorting sound to get her attention. Our guide stopped to take his shoes off to walk through the river and Cappuccino decided to keep going. Michele was holding on for dear life hoping he didn’t decide to make a run for it and have a little rendezvous and of course Ron was behind it all laughing. The reality was, this was all at a snail’s pace the camels were really well behaved and well trained. 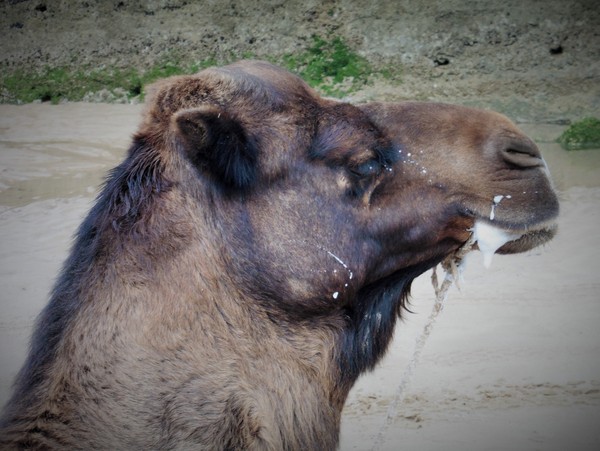 We arrived at the old Portuguese fort, now only a pile of rocks along the point, our guide asked if we wanted to stop…without hesitation Michele said ‘yes’ and held on as Cappuccino knelt down to let her off. She had already decided that she was walking back.

After a wander around it was time to start heading back, Michele took off her shoes and took Cappuccino’s rope and we started walking back to Essaouira. It was actually quite a nice walk although she was concerned a few times she might get stood on. 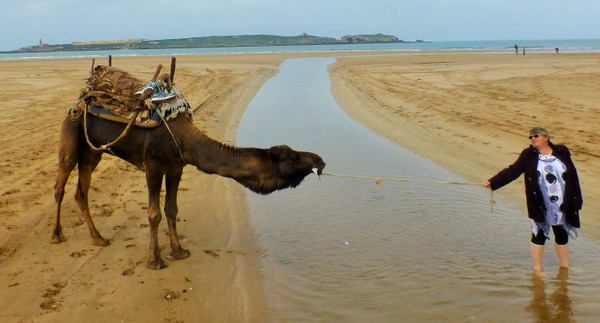 The guide took Ron and all the camels off up through the dunes, poor Chocolate tripped over something in the sand. Ron was really impressed at how the guide dealt with it, calming Chocolate, getting Ron off then letting Chocolate get to his feet before checking he was ok. Ron then ended up walking some of the way before remounting for the final leg back to our starting point. 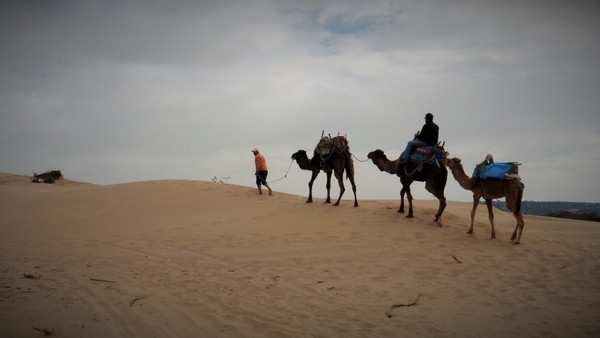 While our bodies were not so grateful the next morning when we both had a few aches and pains, it definitely was a new way to celebrate ‘hump day’.

The cost of camel rides in Essaouira start at 150 dh for an hour each plus a tip for the guide.There are a number of operators on the beach who all charge the same price, if you have time we recommend you don’t make a decision straight away. There are a couple of cafes, sit and have a drink, watch how the camels are being treated and then make your choice.