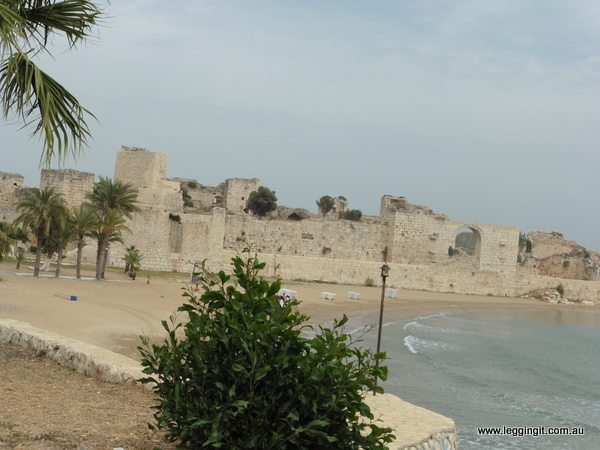 It was an early wake up this morning as we have to travel 300 km’s from Koru Beach to Mersin. A quick trip into town to get some cash, fill the tank and my feet were under the table waiting for breakfast by 8 o’clock. Whilst I was in town Michele got her bags packed so it was a matter of breakfast then load up. Koru Beach was really nice but also overpriced, after only spending $67 a night in Antalya including everything the bill here was the same. 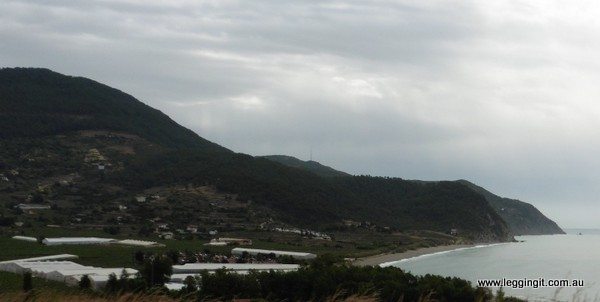 Heading out on the road from Koru Beach to Mersin we passed lots of hothouses growing strawberries on the flats and up into the hills. With their concertina coverings they look like huge caterpillars devouring the hills. Around Gazipasa there isn’t a great deal of usable land due to the hills but the locals are growing all sorts of fruit and vegetables. There’s the usual hothouses growing peppers, tomatoes, cucumbers but around the area they even grow bananas and wheat right up to the shoreline.

After a brief stop for a coffee in Anamur we hit the road again. We’d hoped to visit Mamure Castle on the edge of Anamur but unfortunately it was closed due to renovations. It’s a great looking castle built in the 1100’s to protect against pirates by the Armenian Kingdom of Cilicia on older 4th century Roman ruins. It was captured by the Seljuk Turks in 1221 and extensively rebuilt. In the early 1300’s the castle was captured and came under the control of the Turkish state of Anatolia ruled by the Karaminid Dynasty. In 1469 it was absorbed into the Ottoman Empire.
With the current renovations the castle looks really great and hopefully next time we visit the area it’ll be open.

Heading out of Anamur we noticed a real change in fashion. Further west women wore harem style pants ballooning around the knees tight at the ankle but here locals, both men and women were wearing fishermen style pants. The crutches hung so low that MC Hammer would’ve been so jealous. The caps and greek fishermen style hats that were common in the west were also gone, replaced by traditional skull caps.The women also wore sleeveless cardigans over long sleeved blouses and the men dark jackets over white shirts. 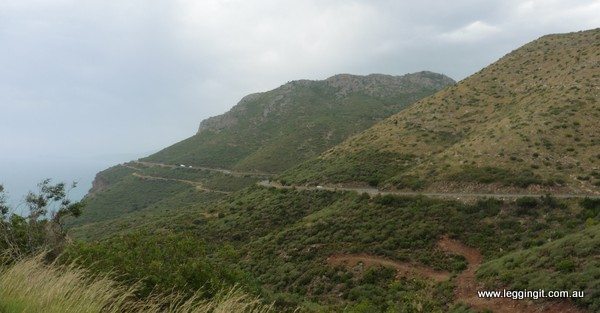 It was a great ride winding through the coastal hills and mountains looking at the modest farms along the way. Currently a freeway is under construction along the coast with tunnels being blasted through the mountains so that people and soon navigating the tricky roads through the mountains will be a thing of the past. By the next time we visit the road will be complete and the lovely ride through the pine covered hills will be gone. We really are lucky to be riding now. 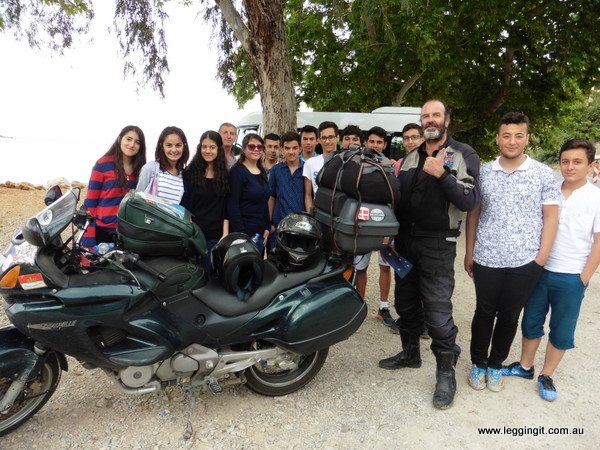 At our next stop we met up with a high school group from Mersin. We’d parked on the edge of a small bay opposite a group of local restaurants near their bus. Soon we were swamped by the kids asking all sorts questions and taking photos. We told them a little about ourselves and they were really surprised we were from Australia. It was a really nice experience.

After saying goodbye we headed over the hills towards Mersin on a pretty rough road before swinging back down onto the coast on a pretty good highway.

Our next stop was Kızkalesi (Maiden’s Castle), situated on a small island about 1 mile off the coast. It gains its name from a local legend that a king visited a fortune teller who told him his daughter would be poisoned by a snake. To avoid the tragedy the king built the castle on the island with no snakes and sent his daughter there. Unfortunately a basket of grapes was sent from the mainland containing snake which poisoned the princess.

Along the coast between Kizkalesi and Mersin there’s quite extensive Roman ruins, ruined medieval castles, and buildings. There’s heaps to catch the eye and explore.

However, despite being close to Mersin, as the day was getting away from us we couldn’t explore the ruins.

Arriving in Mersin the first thing that struck us was the noise of car horns. Mersin has a population of nearly one million residents which it seems were all out driving today and apparently all off their medication as a huge traffic snarl clogged the cities arterial roads. Microseconds before a light would change colour they’d be blowing their horns telling everyone to hurry up and get out of their way. The noise was unbelievable.
With the increased tension drivers were taking incredible chances ducking up the centre between two cars on the two lane street, driving in the ice lane to get ahead and generally driving like maniacs.

It wasn’t easy to find our hotel as we got caught in a one way system and had to cut through the back streets to get to it. I was so glad to finally find our hotel.

The hotel staff were so friendly and welcoming when we arrived. I was directed to park the bike in the hotel parking but due to it being split level the bike wouldn’t sit on the kick stand without toppling. Eventually they directed me across the road to another of their parking spots.

Arriving at the front desk they were so apologetic to announce that as the hotel was quite full they’d had to upgrade us to a suite.

As you can imagine the suite was beautiful with a lovely big bath, lounge and bedroom. The room was so big I couldn’t see the TV from the bed.

After settling in we took a walk around the city. It was noisy, a little grubby and the streets full of people. We headed to the waterfront and strolled along Ataturk park looking for a restaurant. It seemed really strange but all the cafe’s were full of people drinking tea and smoking shisha pipes but no food.

We headed back towards the hotel through the market area of the city where a large bazaar stretches. Near the fish markets we found a nice open air restaurant framed by creepers and full of locals. In the heart of the bustling city it was the perfect setting in a quiet street, where we enjoyed some fresh calamari and salad.

We headed back to the hotel where we settled down for the night. Tomorrow we head to Cappadocia which we are really looking forward to.