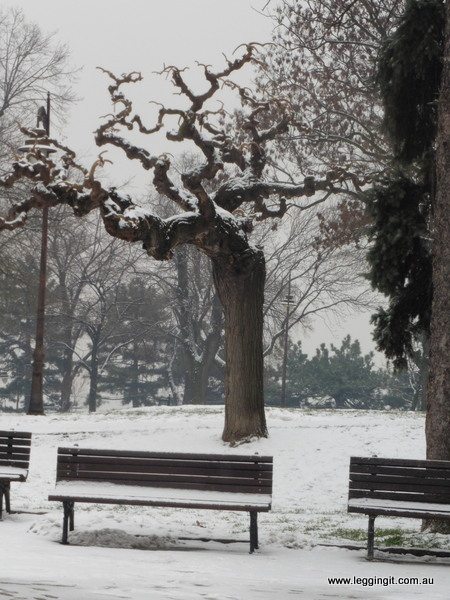 The snow was falling as we woke up in Belgrade, so everything was covered in a fluffy white blanket. At breakfast Aleksandra the day manager at Hostel 40, met us and told us a little about the city and enquired about our comfortably. It was really nice to be made so at home. After breakfast we met up again with Aleksandra who gave us a map and had prepared a suggested itinerary for the day. As we’d been talking about visiting Greece, she also gave us a few maps of Greece and some suggestions of places to visit.
Our first job however, was to retrace our steps to the train station and book tickets for the return journey to Bar, in Montenegro.

Setting out from the hotel it was beautiful seeing all the cars along the street covered in snow, well maybe not for the owners who had to scrape all the windows. The sign near the public square read minus four so we were glad we bought our winter gloves.

At the train station nobody spoke English but we managed to book a ticket but after closer inspection we discovered a lost in translation moment. The lady was holding her thumb up saying “jedan” (one) and we thought she meant one way, so we only had one ticket. That was soon rectified and we were on our way with two tickets.

The first stop on our itinerary was the green markets, at Pijaca Zeleni Venac, where heavy coated sellers stood shuffling from foot to foot, hands thrust firmly down into their pockets as they braved the cold. There wasn’t a huge array of variety, apples, oranges, carrots, cabbage and the main ingredient of most dishes, the humble potato.
Heading up towards the main shopping area on Mihalia, the stairs were pretty rough and broken so we had to watch our step as we gingerly stepped over missing pavers. 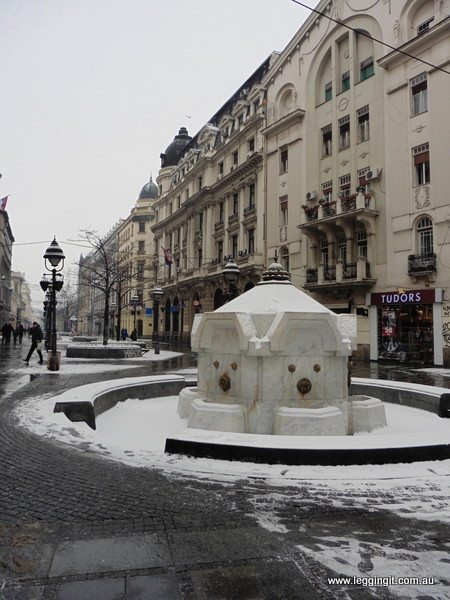 The main shopping street was a lovely long pedestrian area with all the big named stores on either side. Lots of little stalls sell hotdogs, souvenirs and lollipops. Many of the open air cafe’s had abandoned their outdoor seating to the winter cold,and the snow had somehow softened their appearance. Meanwhile a tiny snowplough darted back and forth busily clearing the snow from the paved pedestrian area.
Passing a cafe we spotted a travellers bike with panniers, propped against the window with its scraggly bearded owner hunched over a computer just inside. We thought it’d be a tough way to be travelling, at the moment with all this snow. 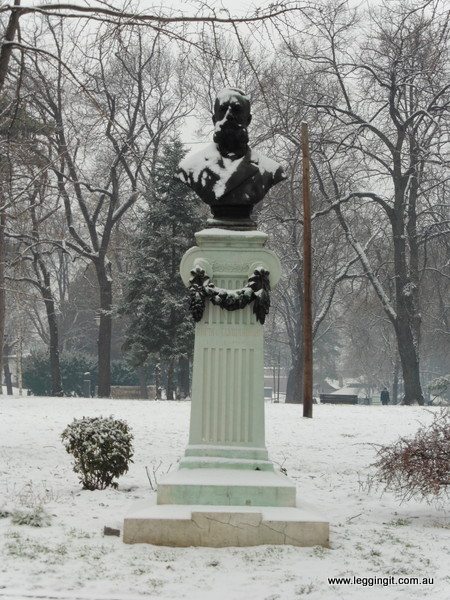 We finally reached Belgrade park, which surrounds Belgrade Fortress and it was quite romantic to walk amongst the trees with the ground all covered in a thick blanket of snow. Arm in arm we walked along through the grounds happily chatting. As I stepped onto an icy step suddenly my feet went from under me. As I was holding onto Michele I dragged her down as well and we both crashed onto the steps. I hurt my back and she hurt her ribs.
We both lay there for a long time before I managed to get up and help Michele back up. It really put a dampener on the day (in more ways than one with wet knees and wet bums.) 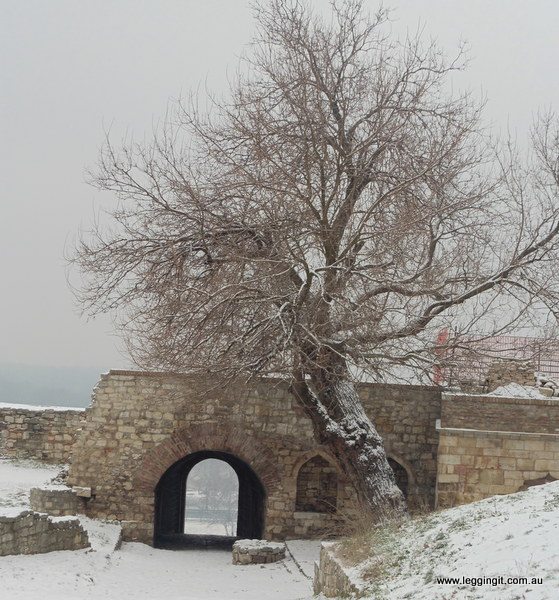 Belgrade Fortress was quiet beautiful covered in a sprinkling of snow to soften its appearance. Even the old guns and tanks of the military museum looked pretty peaceful covered in snow. Walking around the grounds we had a great view of the convergence of the Danube and Sava rivers.
As we were both pretty sore we headed back to the main shopping street where we picked up some anti-inflamiteries and headed across to the cafe where the bearded travellers bike still stood against the window. 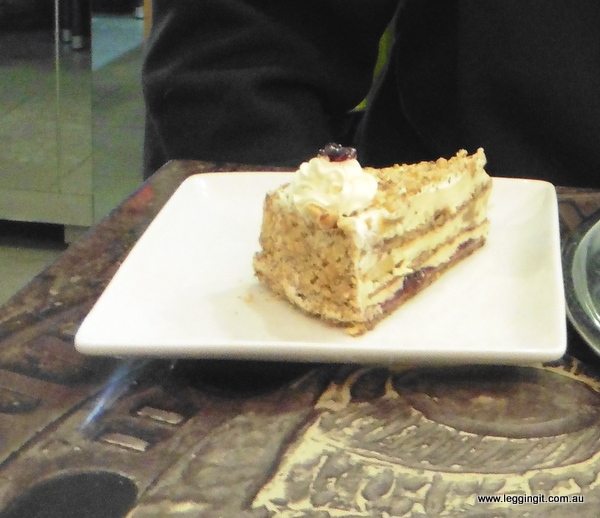 After a coffee, cake (Michele’s new favourite Moscow Snit) and few pills we headed for the door. The dishevelled traveller spoke to us in a broad Aussie accent asking if we were “Australians?”. Of course we replied and after introductions sat down for a chat. Well the next hour our so just flew by and we heard lots of stories about how Mic got to be siting in this cafe in Belgrade waiting for his laptop to charge (like a well seasoned traveller). It turns out that Mic, who now lives in England, is retracing some of the steps that his grandfather, a Gallipoli veteran took, one hundred years ago. With his grandfathers bullet riddled war diary as a guide, he’s following in the footsteps from Gallipoli to the western front.
It was fascinating talking to Mic who’d led a strange and varied life. He told us many tales including one about a friend of his who was housesitting in London. It was a long sit with the owners away for 3 months, looking after a very old dog. The family knew the dog may die whilst they were away and just asked to be called when it happened. Sadly the dog died, and she was asked to take the body to a vet and have it cremated. When she rang the vet they said a courier could pick up the body for £50. However, although she would have been reimbursed she did not have the spare money, so decided to take it herself via the underground. So dog in suitcase she headed off only to find the escalators not working in the station at the other end. One step at a time she struggled up the stairs with the suitcase until a nice young chap came along and offered to carry it for her. As they climbed the stairs, he commented the suitcase was heavy and enquired what was in it. Well what do you say? Not wanting to say a dead dog she said she was moving and had her stereo in it. When they got to the top he went through the turnstyle and as she followed he took off with the suitcase and disappeared. She had to ring the family and explain what happened. Thankfully they thought it was funny ….just imagine the guys face when he opened the suitcase to discover the dead dog, I bet he gets a great surprise and doesn’t pinch another.
It really was a great story, and Mic had lots of story’s including some of his trip so far. He’s been sleeping rough in a hammock most of the way from England. At the moment he sets his hammock up between two trees below the walls of the fortress, with just a tent fly to keep the snow out. 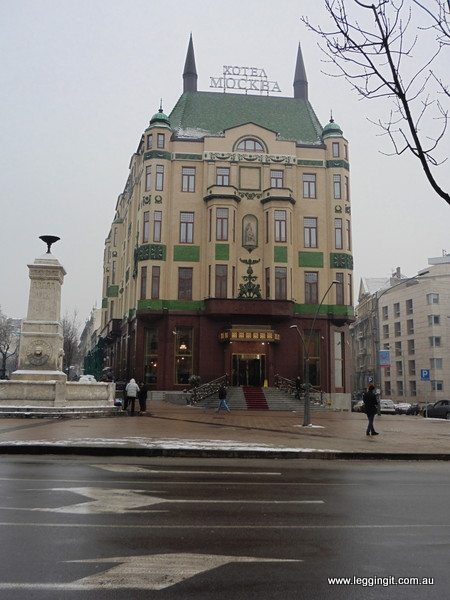 Wishing him well we set out towards Hotel Mocba (Hotel Moscow), on Terazije, the fanciest looking hotel in the centre of the city where we caught the 31 bus to Trg Slavija, not far from Hram Svetog Save. 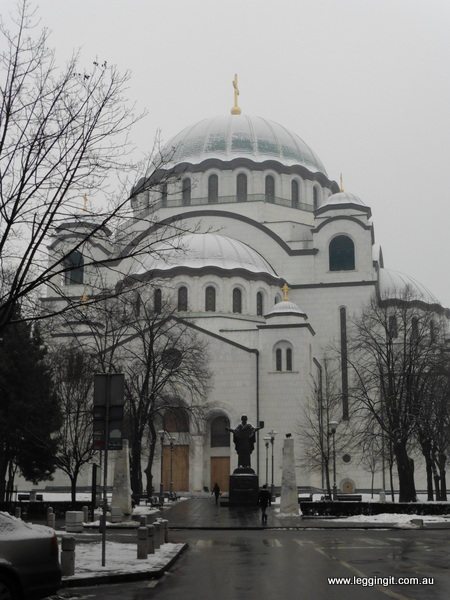 The Church of Saint Sava (Храм светог Саве, Hram Svetog Save) is the biggest in Serbia, however still under construction inside. The interior floor is still bare concrete as is the ceiling and archways. Most of the lower sections were covered in plastic sheeting or scaffolding but around the interior paintings and shrines with saints pictures were on display. It was interesting watching as a lady crossed herself and touched the floor three times before kissing the saints picture. At the different shrines many other people did the same. It reminded us of the Orthodox Church in Russia. 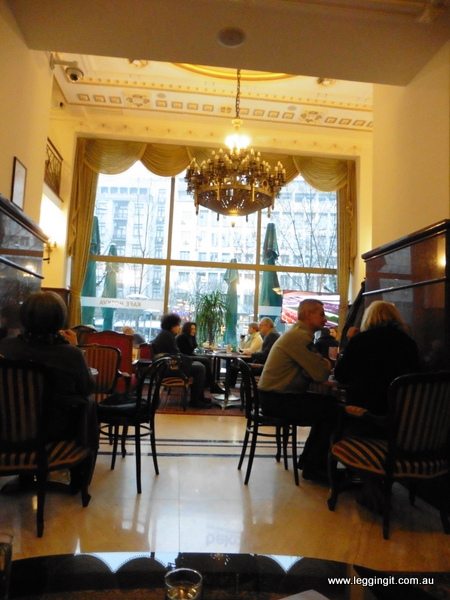 Leaving the cathedral we caught another bus back to Hotel Moscow, where due to cold weather, we stopped for another coffee At Hotel Moscow despite its old world opulence the prices were quite reasonable and sitting in big comfy sofas, drinking coffee was really nice. We certainly could get used to this although the locals were a bit more dressed up than us.
As it was late in the afternoon we headed back to the hotel, for a break. The hotel had booked us a table at the Three Hats (Tri Šešira) a traditional Serbian restaurant in Skadarlija, a special part of town lined with Serbian restaurants and bars, so with aching bodies we crawled into a taxi. The street was quite beautiful with a mixture of new and old buildings lining the cobbled streets. Outside every restaurant a lady invited us in to try their food as we headed for Belgrade’s most famous restaurant. After all the hype, the reception we received was pretty indifferent and despite having a booking for a romantic table we were shown to a pretty crap table by a waiter who wouldn’t crack a smile if he won lottery.
In the other room a Serbian band were playing folk music and after every song it seemed a new band member would shuffle past us to replace someone in the band. The food was pretty good Michele went for a stuffed pork belly and I had lamb cooked in the Peka. Eventually another band started playing, right at the next table. Although they played ok music, a more dejected bunch would be hard to find. The only time any of them cracked a smile was when a lady at a nearby table pulled out an iPhone. Two of them crowded the table, whilst the rest of the musos in the band’s arms lazily went up and down like automatons.
It wasn’t the experience we had in mind when we booked in this  morning, so as we were a little sore we decided to call it a night and headed for the taxi. Maybe we should’ve tried one of the other restaurants which seemed quite inviting but there’s always next time. Hopefully next time we’ll visit in summer, when Belgrade would be rocking.

Tomorrow we catch the train back to Bar in Montenegro.

You can read the review on our hotel here

4 thoughts on “Walking around Belgrade, Serbia”