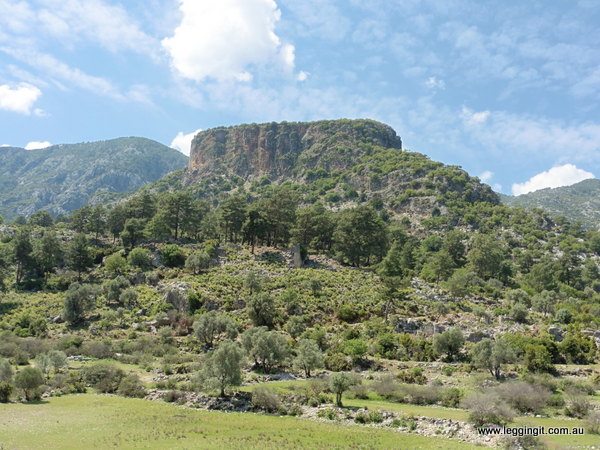 Today we took a ride from Fethiye to Pinara, an ancient Lycian city which dates back to 500 BC populated by the overflow residents of nearby Xanthos. During Lycian times it had a port and had major voting powers within the federation. Changing tidal flows caused major silting problems for many of the coastal ports including Pinara.
Supposedly Pinara is the second least visited Lycian site in the Xanthos valley.
The city lies about 40 km’s from Fethiye not far off the Fethiye to Kas road. The road from Fethiye to Kas is quite a nice ride which passes behind the coastal mountains through hundreds of hothouses. 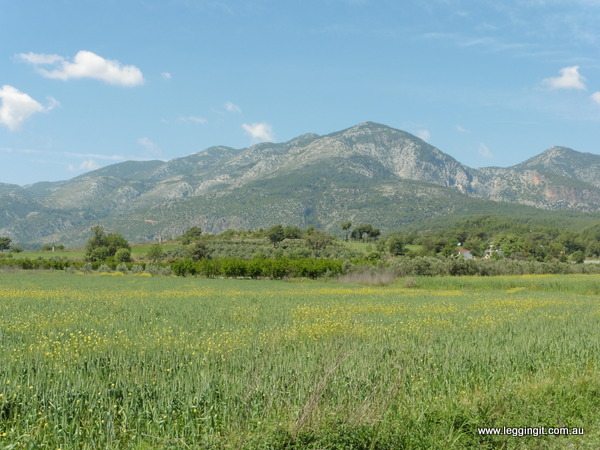 Not far from Esen we spotted the brown historical sign pointing to Pinara. As the road slowly climbed towards the village of Minare we passed through fields of wheat and houses surrounded by vegetable gardens. On the edge of Minare another sign pointed back up the hill to our left so we swung around and powered up the hill. At the first bend the asphalt ended and the road petered out to a gravel track. It was a little chopped up from recent rains so we gingerly picked our way through ruts, potholes, and slippery patches of mud with the back wheel slipping and sliding. 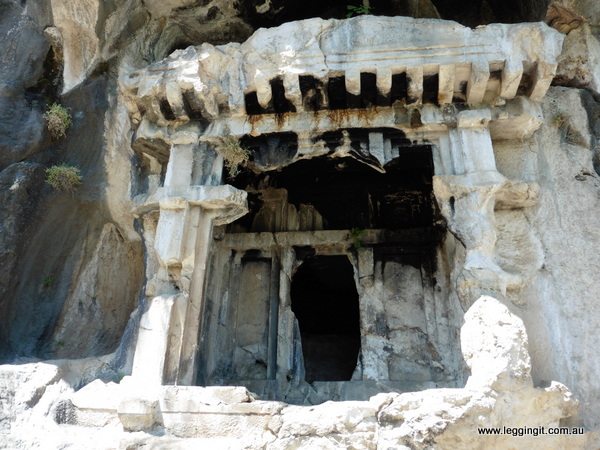 Eventually we made it to the car park and paid our 5 TL ($2.50 AUD) at the ticket office. The walking track from the ticket office leads up the hill through a rocky creek bed towards a series of low cliff faces covered in rock tombs. The royal tomb is more elaborate than the rest with a carved portico featuring faces on the exterior and on the interior friezes featuring city walls, towers and people. 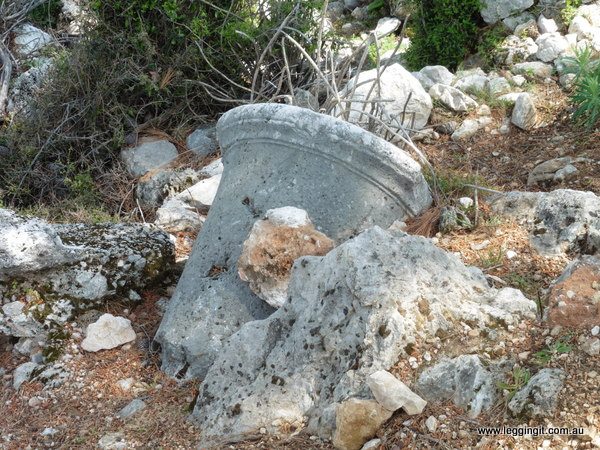 As we climbed up the hill to look out over the ruins we discovered broken pieces of roof tiles, pottery handles of jugs, and clay bricks. It was like being on an archaeological dig. Around Pinara Mother Nature has reclaimed a lot of the city but some of the city walls built using cyclopean masonry techniques (where the interlocking stones don’t need mortar) are still standing. There are also the ruins of a few temples, and buildings. 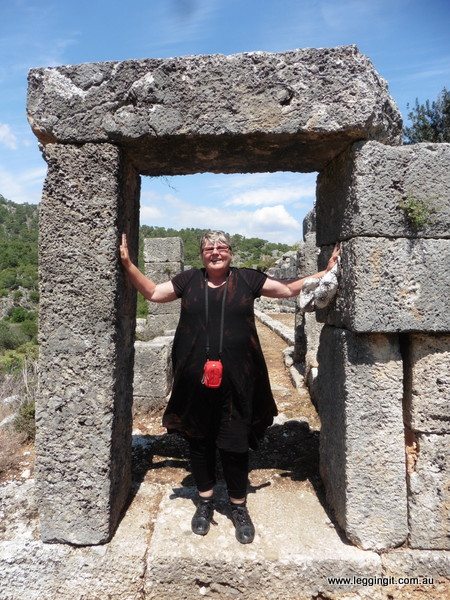 The most impressive of these is the theatre. Surrounded by trees and with an olive tree growing through the seating on one side it looks like Mother Nature is ready to reclaim the theatre. The theatre dates from the 200 BC and had a capacity of 3,200 people so it was quite a substantial building. 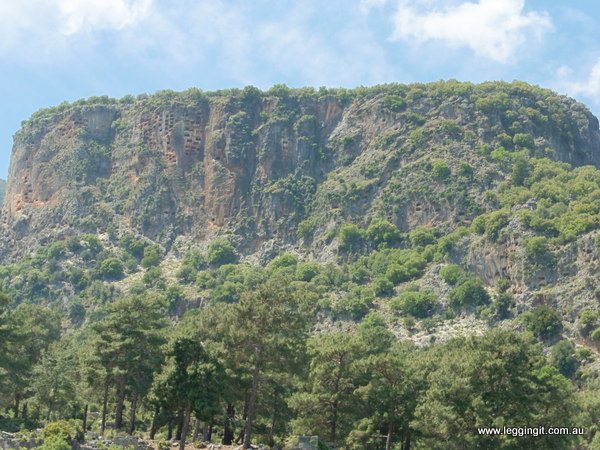 Looking back towards the hill from which Pinara draws its name we were surprised. The hill was honeycombed with hundreds of rectangular tombs. It made us wonder how they carved the tombs in the vertical cliffs. Did they use scaffolding. 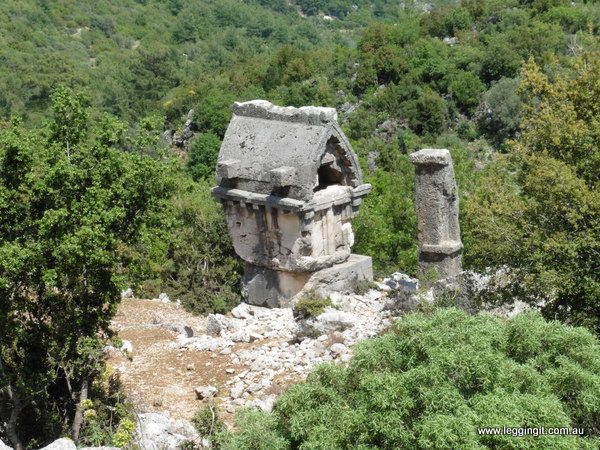 Exploring Pinara was really fun and we picked our way through wildflowers and pines on the upper areas of the site finding temples and sarcophagi. On the lower areas there were a few olives trees and patches of open grassland. It seemed wherever we looked we found the remains of human habitation.
After the best part of half a day exploring we called it quits and headed back to the bike. The ride back down the road was a little better, apart from meeting a tractor midway. Lunch at the restaurant of the nearby fuel station turned out to be quite cheap and good quality which was quite surprising. (25TL for 2 chicken shish kebab meals and drinks).
It was nice reflecting on our day of discovery. Originally the plan was to visit Pinara and Patara today however, there just wasn’t enough time so we headed back to Uzumlu and were blessed with this stunning sunset. 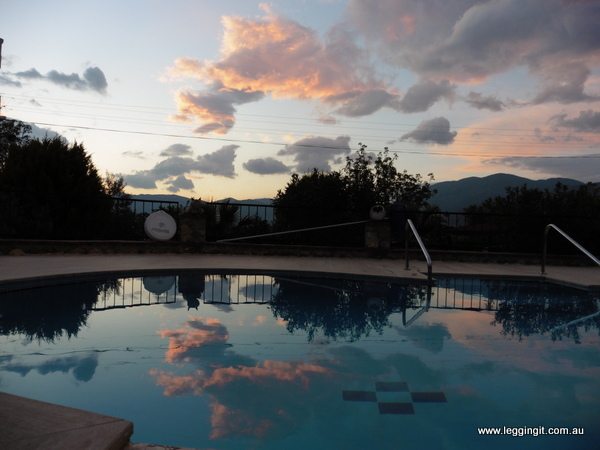 One thought on “Pinara Turkey”