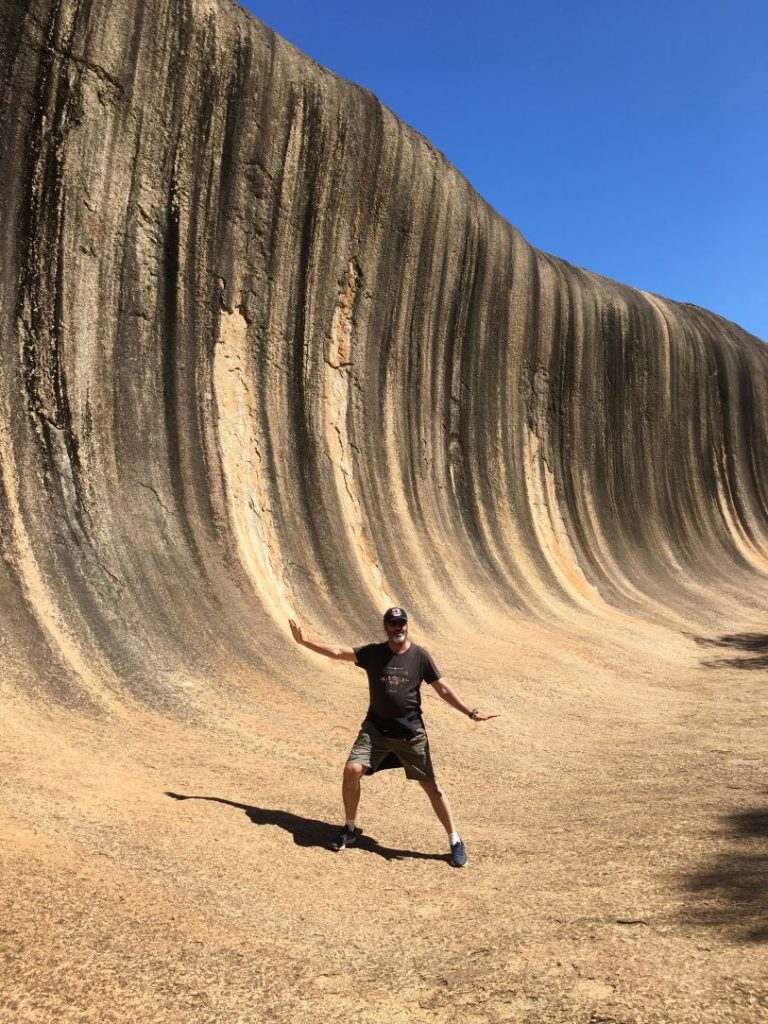 Australia is a huge country, with landscapes varying from dense rainforests, rugged mountain peaks, to the dry arid outback. Because of its remote location, Australia is home to many unique animals, plants, and rock formations. Here are some of the most unusual places in Australia to explore on your travels down under.

Along the Great Ocean Road, you’ll find one of Australia’s most unusual places. The Grotto is a geological rock formation characterized by its complex part-cave, part-sink-hole, part-archway structure. Visitors can take in the views from a viewing platform or head down to sea-level to get up-close. You can peer-through the archway and even get a glimpse inside the calm waters inside. It is located near the famous Twelve Apostles, so make sure you stop by on your way to the Grotto.

Tucked away in Australia’s Northern Territory, Kakadu National Park is home to some of the world’s oldest rock paintings. Visitors can explore the Aboriginal rock paintings at sites including Nourlangie, Nanguluwur and Ubirr. Some paintings are estimated to be over 20,000 years old, depicting images of animals including the native kangaroo, as well as daily life, and contact with the first European settlers.

One of Australia’s most iconic and usual species is the beloved koala. These little creatures can only be found in the wild in Australia, making them one of the rarest mammals in the world. One of the best places to see koalas in their natural environment is at the Kennet River Koala Walk. Because the koala population can be found in high numbers in the Great Otway National Park, visitors will often see koalas sleeping or relaxing in the branches of the eucalyptus trees along this pathway.

Situated off the coast of eastern Australia is one of the most unusual places in Australia, Fraser Island. This 120-kilometer stretch is the largest sand island in the world. Because of its remote location, the plants, animals and overall ecosystem on the island have evolved in their own way. Lush rainforests grow on sand dunes and there are over 100 fresh-water lakes, including half of the world’s perched dune lakes. The island is also home to 25-30 packs of dingoes that are believed to be the purest strain in Australia due to their isolation. Hop on a 4×4 and explore this unique Australian island.

Two hours north of Perth, you’ll find the Pinnacles, one of Australia’s most unusual places. Situated within Nambung National Park, the Pinnacles are made up of thousands of ancient limestone spires ranging from a few centimeters to several meters high, standing in contrasts to the golden sand of the desert. Scientists believe the Pinnacles were formed 25,000-30,000 years ago when the coastal ocean winds eroded the sand, exposing the limestone pillars. Today, visitors can explore this stunning location by walking through the Pinnacles desert on several tracks.

One of Australia’s most unusual, remote destinations in Lake Hillier, a stunning bubble-gum pink lake off the coast of Western Australia. From above, its bright color is a beautiful contrasts against the bright blue waters of the Pacific Ocean, with just a strip of greenery seperating the two. Though the exact cause of the pink color is still contested, the lake maintains its color year-round. Unfortunately, Lake Hillier cannot be visited by tourists as its currently closer for further research.

Surf lovers will love the Wave Rock. This huge wave-shaped rock formation in Western Australia measures 15-meters tall and over 110-meters long. The multi-colored granite rock was formed roughly 2700 millions of years ago by erosion, shaping the granite into the curved, wave-like structure it resembles today. Visitors can walk the trails along the base or the top of the wave, or check out the hundreds of ancient rock paintings in the Aboriginal Mulka caves closeby.

For an incredible waterfall experience, head to Dorrigo National Park in New South Wales. Visitors can take a stunning 1.7-kilometer walk through the lush Gondwana rainforest before crossing a suspension bridge to Crystal Shower Falls. There are several ways to take in the falls – you can walk right underneath them, or go behind the waterfall into a rocky cavern, where you’ll be rewarded with incredible views.

To experience some of Australia’s most unusual landscapes, head to Uluru-Kata Tjuta National Park in the Northern Territory. The park is famous for its spectacular sandstone monolith, Uluru, as well as the 36 red rock domes of Kata Tjuta. You’ll also find many incredible rare species of animals and plants, including desert bloodwood, mangata and desert quandong. The land is of extreme cultural significance, and is owned and jointly managed by the Anangu Aboriginal people who have lived on this land for thousands of years.

Umpherston Sinkhole, also known as the Sunken Garden, is a magical destination in South Australia. What was once an otherwise unremarkably sinkhole formed after the collapse of a subterranean cave is today a lush, green garden paradise. In 1886, a local by the name of James Umpherston began the sinkhole’s transformation into the public park it is today. Visitors can roam around the manicured garden beds, smell the fresh mountains, and peak up at the surface while being mesmerized by the unique location.

Regardless of where you end up traveling in Australia, you’re sure to discover some amazing landscapes and hidden gems. Be sure to check out some of these unusual places and make the most of what this incredible country has to offer.

2 thoughts on “Unusual Places To Visit in Australia”