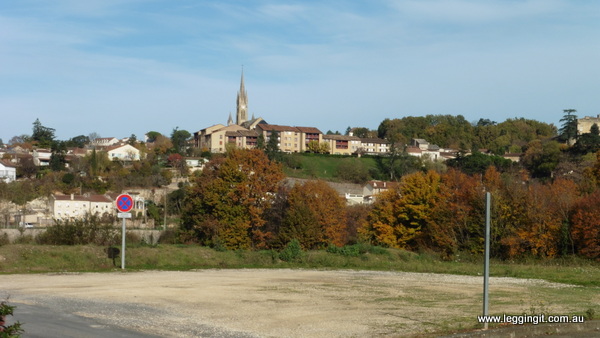 It was a little overcast as we said our goodbyes to Jean-Gerard and Elizabeth this morning, before heading out of town towards Périgeux. The low cloud cover was playing havoc with the Satnav and it took ages to reset when we stopped for fuel and when Ron took the wrong turn on the roundabout. Once again we bypassed motorways and toll roads, preferring the smaller rural roads which are not quite as fast but have lots more scenery. By the time we reached Saint-Pardoux-la-Rivière, we were due for a toilet break so we rode around to find somewhere. The local cafe/bar was the only place in town where there seemed to be any form of life so we decided to stop. Entering the smokey bar we found it jam-packed full of workmen and the dining room overflowing with workers and locals, it looked like pension day at the community hall. We were ushered to a table and had a choice of veal or pork to which we replied pork, and offered an aperitif. Soon a slice of pizza arrived, Le entre. It was really nice watching the tables full of workers and locals all chatting and laughing. A turine of boiled salted pork, carrots, onions and potatoes in a clear broth arrived along with a basket of bread, Bon appetit. Just when we thought we couldn’t eat another bite the cheese plate arrived and we took what we could eat local sheep cheese soft and tangy, local Camembert and Emmenthal. Then we had dessert panna cotta and coffee. By the time we’d finished 2 hours later, we were well and truly bloated. The food was simple but delicious and only cost €27 which was really good value. We’d been advised to seek out little villages for lunch and we really cracked the jackpot.
The run down to Périgeux also coincided with the sun emerging from behind clouds. It was interesting watching the changing landscape with lots more hills and the autumn colours a lot darker. Ron was enjoying seeing all the farms with beautiful golden Limousin cattle, which were bred and named after this region.
There were a few nice chateaus and stately houses as we rode into Périgeux and lots of large shopping centres. The town was a lot bigger than we’d originally thought but it was easy enough to find the Formulé 1.
Tomorrow we head to Toulouse to see our friends Tanya and Pete. We met Tanya and Pete at an outdoor eatery in Penang last August when they were riding around Asia. This year they had their bikes shipped to Europe and they’d ridden all the way to the Arctic Circle and all through Europe. We’d been planning to catch up on the road somewhere but every time we were heading in different directions. It looked like however we would catch up to them in Spain. We’d kept in touch and been following their journey on Facebook. At Toulouse disaster struck when Pete and his bike was run down from behind by a courier van. We’d been shocked when we heard the terrible news and how Pete was in a coma. We don’t know what we’ll face tomorrow but hoping that just being there may be of some support to them both. 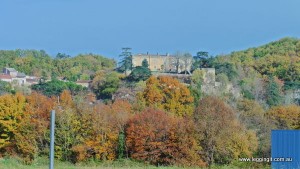