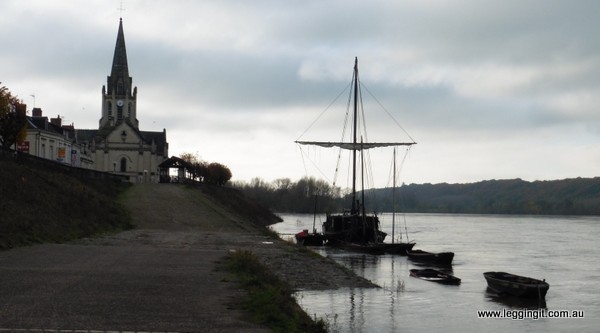 The day started with a visit to Musée du Compagnonnage, where Ron had visited last trip and after hearing about it I wanted to see it for myself.

Companions are master craftsmen from all sorts of trades who qualify by a long “hands on” journeyman apprenticeship. It’s interesting that membership to the guild is not by passing a conventional examination but judged on merit. The candidates are assessed on moral values of fraternity, perseverance, courage, effort and their professional skills which is demonstrated in a masterpiece. As part of their training they journey around the country in a tour of France which enable them to gain a balanced training. Legend has it that the Guild of Journeyman Companions dates back to the construction of the Temple of Jerusalem, three thousand years ago. The three founders were supposedly the temples master builders a stonemason, a carpenter and an architect.

The exhibition houses all sorts of exhibits dating back to the 1800’s there’s leatherwork (saddlery and footwear) metalwork (blacksmiths, locksmiths and farriers) stonework (stone cutters, masons, roof slaters, and plasterers) woodwork (carpenters, joiners, turners, coopers, clog makers and basket makers) textiles from (cloth weavers, rope-makers, and tapestry makers) and dishes made by bakers, confectioners and chefs. New modern trades have since replaced older obsolete trades. The display of masterpieces throughout the exhibition highlights the skill of the tradesmen. Some of the intricate woodworking in the spires or the iced and decorated cakes are just amazing.

After our visit we took a walk around the city. Since our last visit Tours has revitalised the city and installed an ultramodern tram which runs through the centre. It’s interesting after watching a TV program lately about how trams fell out of fashion and were ripped up in favour of buses. These days they’re making a comeback with many cities installing trams. Melbourne had the right idea by not following the trends they waited until trams became fashionable again.

The centre of Tours is a mix of old and new buildings as many buildings were destroyed in the war. The real French feel has been maintained with lovely tree lined avenues and typical French architecture using local white stone for the walls and grey slate on the roofs.

Once again we visited the Tours Cathedral, a massive structure not far from the centre. It’s quite impressive inside with a mixture of old stained glass and a section of current images on stained glass. The new section reflect current technologies and communication such as mobile phones. It’s just something we didn’t expect in a church.

Not far away the old Hotel De Ville (that’s what the French call their town halls) was covered in long sprays of flowers hanging from window boxes. Tours is pretty pleased to have been awarded four flowers for being one of the most floral cities in France.

We met our friend at the train station which like all large public areas in France was patrolled by soldiers with machine guns, a sad reflection of today’s society.

After lunch we went on a road trip through the Loire valley along the Vienne, Cher, and Loire rivers. A levy bank has been built along the river to prevent the river from overflowing and flooding the towns. On the levy a small road is built which follows the course of the river. The sky was quite overcast so the views along the river were quite magnificent with lots of greys, silver and autumn colours. We also learnt that it’s possible to hire a bicycle in Tours and ride all the way along the river to Anjers and drop it off. We thought what a great idea, as the road is really quiet with only an odd vehicle every now and then.

Another idea would be to hire one of the traditional boats which used to ply the river up until road transport really took over. These days people are able to hire them out for trips along the river and the boats look really rustic with a few modcons. We passed a boat builder who still makes them in the traditional shape especially for working on the Loire.

The drive along the river took us past lots of chateaus which overlook the river including Loches, Saumur and Chinon. The sun came out as the day wore on and it was beautiful enjoying the sun on the river. It was wonderful spending the afternoon with Jean-Gerard seeing the his love of the Loire made us appreciate the area all the more.

As the sun was setting we returned home where Elizabeth greeted us with a dinner of traditional French cuisine.

Tomorrow we head south to Périgeux for an overnight stop on the way to Toulouse.

2 thoughts on “Loving the Loire”