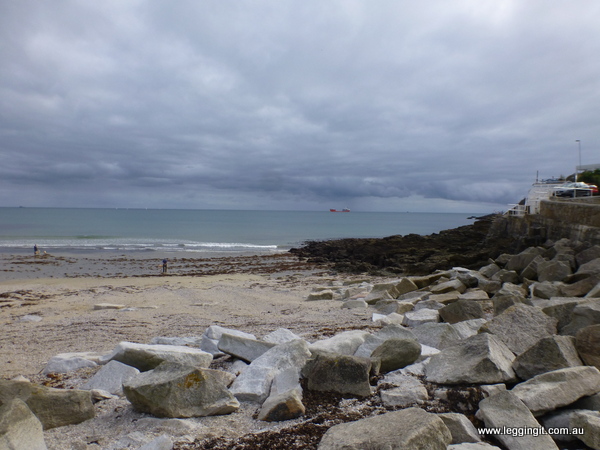 The owners of the house that we were housesitting arrived home late last night and we spent too much of the morning chatting and enjoying one of the most glorious sunny days we’ve seen for the whole week. They were really nice people so it was too easy just to chat and chat. Eventually Ron got the show on the road by packing the bike, and saying ok lets go, very subtle.

Due to the weather the bike just blasted up the road to the ferry at Torpoint. Three trips on the ferry for just 30 pence, that’s as cheap as Asia. The trip to Bournemouth seemed to take forever for a one hundred kilometre journey, then we discovered that the distance was as the crow flies but we actually had to head back down the peninsula and up another. A distance of about 250 km’s, and just a small difference.

We had a nice stop off in Honiton on the way. It’s quite a scenic town with lots of quaint old buildings. The Thyme Cafe looked pretty good so we ordered a Ploughmans lunch and chicken with lemon mayo baguette. The food was really good and whilst we were sitting there we saw the photos on the wall of the car accident which happened earlier in the month. Where we were sitting along with the whole front of the cafe was totalled when a car crashed through the front window. We were trying to work out how it happened but it was obvious that it must’ve happened when there were no cars parked outside.

Riding into Bournemouth the traffic was insane so we had to lane filter for kilometres, slipping between cars. As it is currently mid term every family is heading to holiday destinations so hence the traffic jams.

When we arrived at the hotel a bloke was going off his nut at the manager about how they had arrived to find their room wasn’t ready and was demanding a free dinner. He was going on about how far he’d travelled however it was about half the distance we’d travelled but he was on a roll. All the while his wife was trying to play it down. It soon became apparent the guy was a serial whinger as he stated that “at the Travelodge they give you blah blah blah” The manager in the interest of customer relations capitulated but we would’ve told him to take his business to Travelodge.
The room was pretty good for a budget hotel, and after a shower we tried out the restaurant. Friday night was buffet night and there was a fair selection of hot and cold food for £10 each.

Tonight we’d organised to catch up with a friend Michele worked with 29 years ago at a holiday camp on the Isle of Wight. It was surreal catching up after all the years and we spent hours chatting about the good old days. It was also Halloween tonight so seeing all the locals out trick or treating was quite fascinating. As we were riding home the grown ups were all out but instead of trick or treating they were partying. We almost run over a few staggering around the darkened streets on the way home but luckily we made it home safely.

Tomorrow if the weathers nice we might continue our trip down memory lane with a visit to the Isle of Wight.