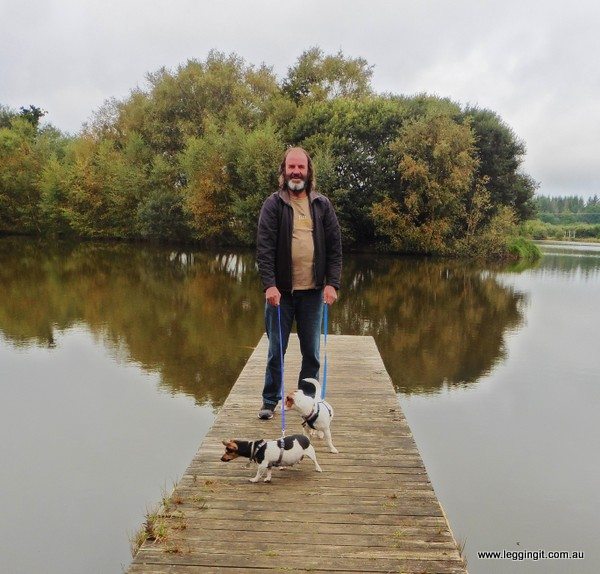 Taking a month long break in the little village of Plourey in Brittany was a welcome relief after the craziness of Paris. Brittany is tucked away in far west corner of France so due to location and landscape I suppose it’s a bit out of sight out of mind.

To describe Brittany we’d probably say think “Britain with better weather”, which of course is not far from the truth as the climate is about 3 degrees warmer. Other similarities include the landscape, which is quite similar with lots of hills and small valleys. Not really surprising as Britain is less than 30 miles away across the English Channel. Brittany in French is Bretagne and Great Britain is Grande Bretagne. 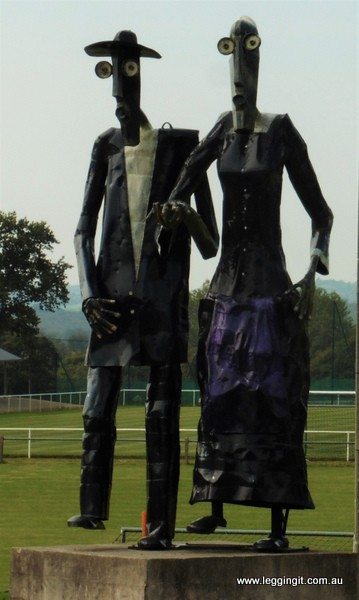 The Breton population have their own traditions and language which is unlike other French cultures. The closest in culture and language, surprisingly are the Welsh. Native Breton speakers can understand Welsh and vice versa. The Breton culture is quite evident with road signs in both French and Breton, architecture, language and food.

In describing it like Britain there are similarities but it’s neither British or French but uniquely Breton. 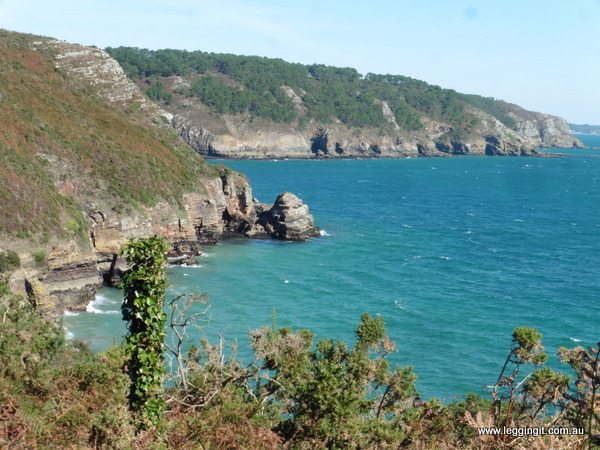 Around the coast of Brittany there are a few bigger areas such as Brest,St Malo and Lorient. There’s also lots of nice little towns and villages in between. 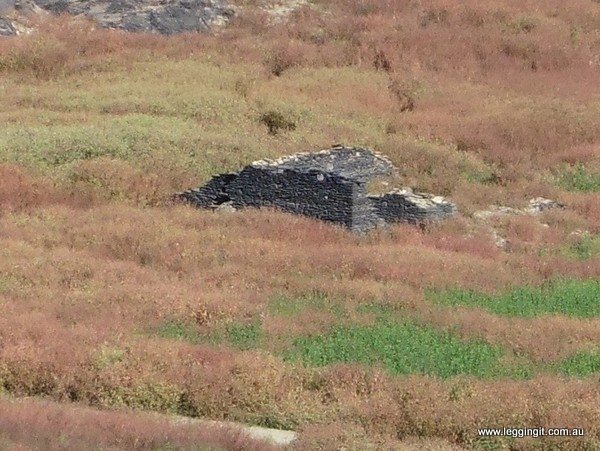 One of our fascinating discoveries was Lake Guerlédan which had been drained as part of a once in a generation inspection for the hydro electric dam so we were able to walk around in the bottom of the dam. Old houses, mining and the old lock system (part of the Nantes-Brest canal) were exposed. The whole dam floor was covered in plant growth and there were hikers and mountain bikers all visiting the strange landscape. 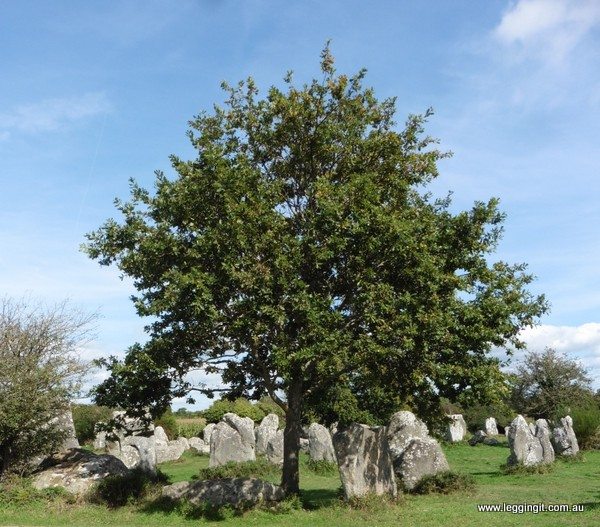 We took a ride along the coast from Brest to Carnac where 3,100 standing stones are placed in lines marking an ancient Neolithic site which was built before the pyramids. Around the area are Dolmens, Menhirs, and stone circles which indicate the area was quite important spiritually. 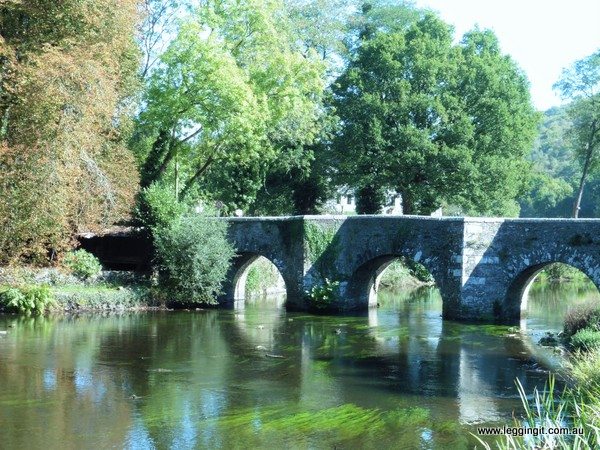 Being based in the centre of Brittany we were able to visit lots of towns and cities, ride through stunning countryside with fields of corn, orchards of apples, green fields filled with plump dairy cows and beautiful old bridges. We explored little churches, and abbeys discovering carvings which gave a true Breton style. 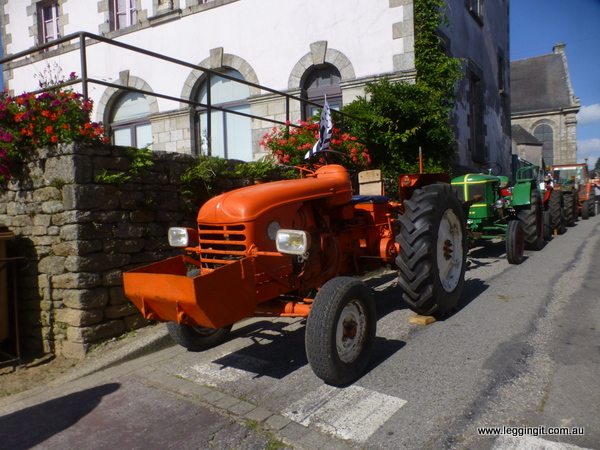 At Le Faouët we visited the Festival of the Horse (Le Fete de Cheval). Set in the centre of town the festival was just like a country agricultural show from home. The old 16th century market building was transformed into a farm yard section with all different breeds of poultry, ducks, geese, rabbits, pigeons, turkeys, and cattle on display. Around the town square an old threshing machine threshed the wheat, separating the seed into bags at the rear and baling the hay at the front. An old FSV tractor powered the machine with a canvas belt and men fussed around the machine pitchfork ing sheaths of wheat into the top and removing the bales from the front. Elsewhere in the square tractors powered apple presses and other farm equipment, old tractors were lined up on display and for a moment we thought the festival should be named the festival of the tractor. Then the star of the festival clattered past with a smartly dressed man in Breton costume at the reins of the carriage. 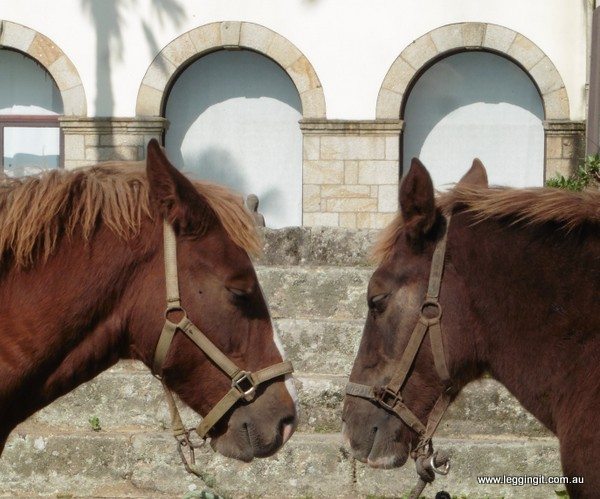 We got to see more of the stocky Breton horses grazing on the manicured lawn of the local school and a display of shoeing an unshod horse which really drew a crowd. Also on display was the clog maker. It was fascinating watching as a block of wood was transformed into a pair of wooden shoes.

Meanwhile the local wood turners turned all sorts of wooden objects, a local artist created masterpieces with his chainsaw and a trailer mounted portable mill turned logs into lumber. There were all sorts of arts and crafts on display, with lots of local Breton Celtic styling.

Tents with wooden bench seats and long tables lined the centre of the square, filled with hungry people downing Breton Crepes and cider. 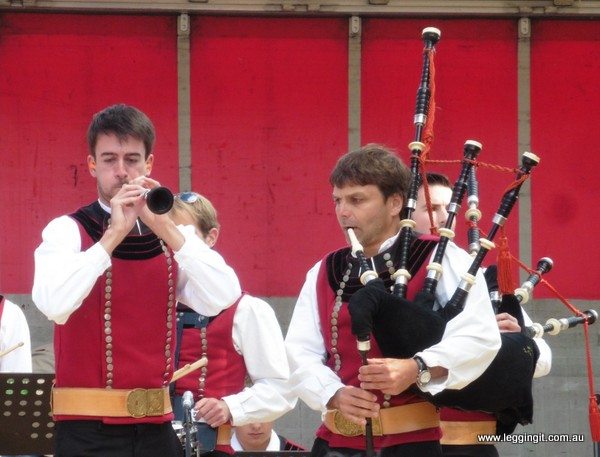 After the different performances a local band started and all the older people got up and started dancing in a circle. It was really nice. 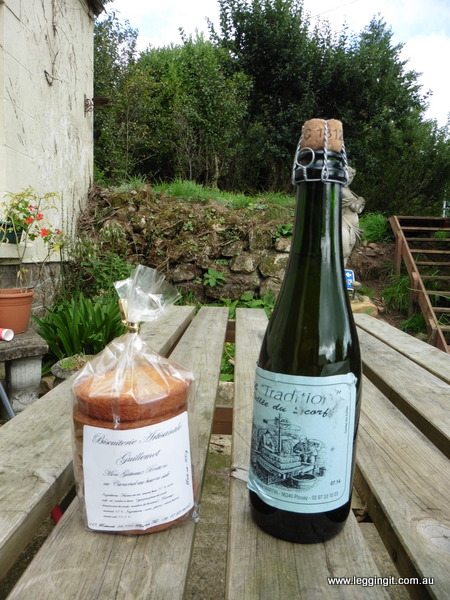 Whilst in Brittany we also tried some of the local foods. Breton Crepes, apple cider, cheeses, galettes, moules and frites (mussels and chips) and of course andouille chitterling sausage which is famous around Gúrméné-sur-Scorff. It’s a smoked sausage made from pork intestines and stomach. It’s really stinky with lots of texture so a huge turn off for Michele who took one look an said “I’m not eating that!” For me however it was pretty tasty. One thing we both agreed on was Breton salted butter- butter with crystals of sea salt just delicious other butter seems tasteless now 🙁 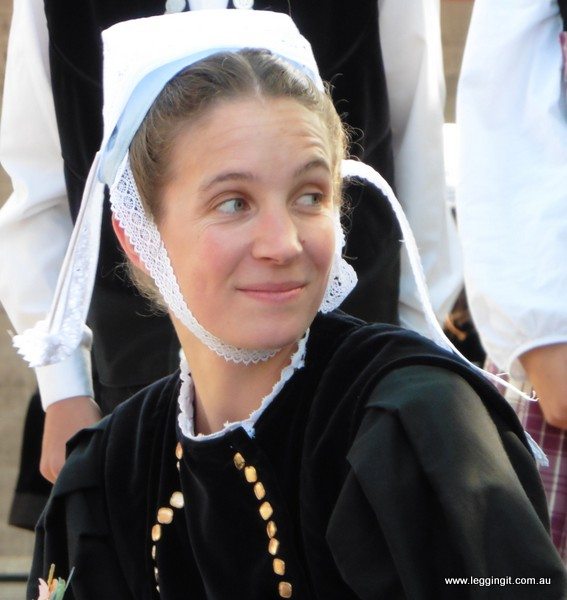 So what is so endearing about Brittany? What would make us want to go back or recommend it to other people? The Breton people of course! We were lucky enough to stay on a farmlet just outside a small village where every morning I’d ride down to the local Boulangerie to order a baguette where I found the locals to be friendly and welcoming. It was interesting and a bit surreal whenever we visited our favourite bar Le Welcome in Ploërdut because whenever anyone entered the bar they’d go around personally greeting everyone with a handshake. It was quite the same wherever we went, with people being generally friendly and welcoming. That combined with great scenery and food, definitely a reason to return.