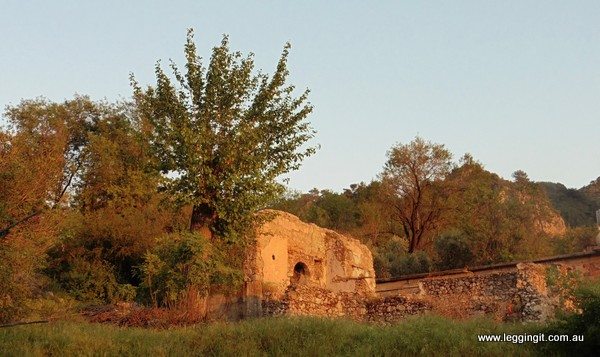 After arriving in Uzumlu we soon settled into a routine and the two weeks just flew by. Our host Sandy has five house cats, a dog and a tortoise. She also feeds street cats at a specially built cat house feeder and at a number of locations around her part of the village. Most mornings I’d fill up the street cat feeding station, walk the dog and Michele would feed the house cats. With our early morning jobs completed we’d have breakfast on the verandah or by the pool.

The weather was just perfect with the temperature most days in the mid 20’s so I took advantage of the pool despite being a little cool. 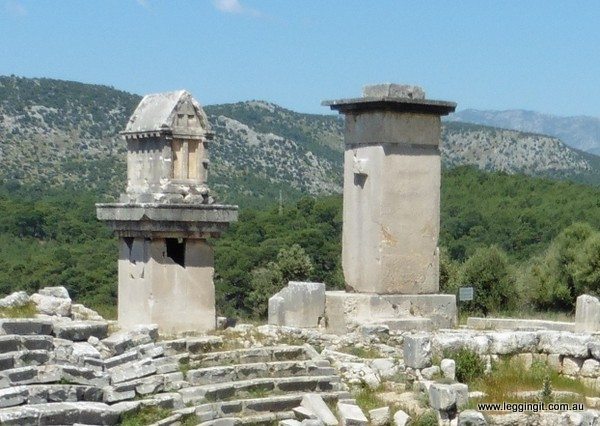 After our early morning jobs were complete we were then free until the afternoon so we took full advantage to visit the Lycian ruins at Pinara, Patara, Xanthos, Fethiye, and Cadianda. We also took a few trips into the countryside to explore the area around Ören, and out towards Derinkuyu. As Uzumlu is close to Fethiye we explored the city and the expat beach suburb of Calis Plaji. 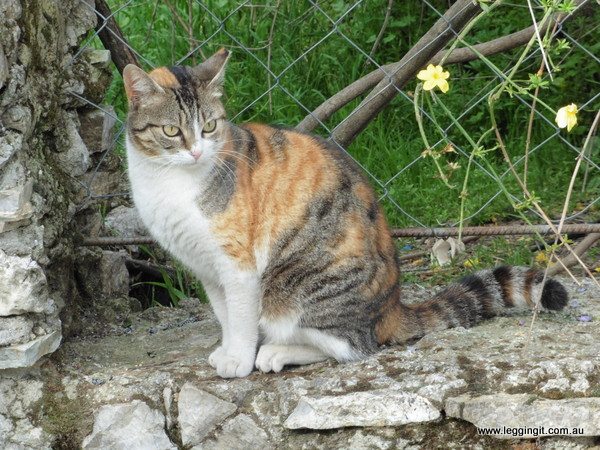 After a day spent exploring we’d do our afternoon cat rounds whilst walking the dog. It was funny to see how the cats would see Cara the dog and come running. Our favourite street cat was Mumma Cat, who’d meow and want a scratch. She would walk with the dog around the whole of the village and it was hard to give her the slip. On our third last day in Uzumlu she eventually just moved herself in so Sandy arrived home to have another cat. 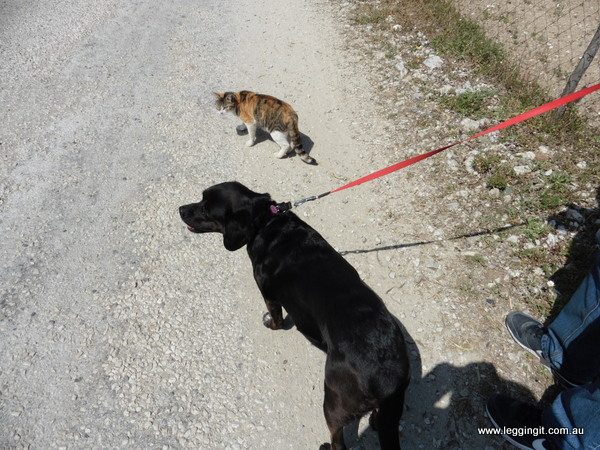 Walking the dog around Uzumlu was never a chore as the village is so picturesque. The paved streets wind through old two storey stone cottages in various stages of repair. As it’s a farming village sheep and goats are kept in yards overnight before being taken out to graze during the day so it was not uncommon to meet flocks of sheep on the street.
Around the edges of Uzumlu there are some more modern housing, two storey bungalows of varying sizes which rich Turks or expats own. Some are permanent homes, others holiday homes and there’s also a few holiday rentals. The new houses have kept the Turkish style with wooden window frames, small verandahs, exposed stonewalls, round staircase turrets. It’s an interesting mixture of old and new. 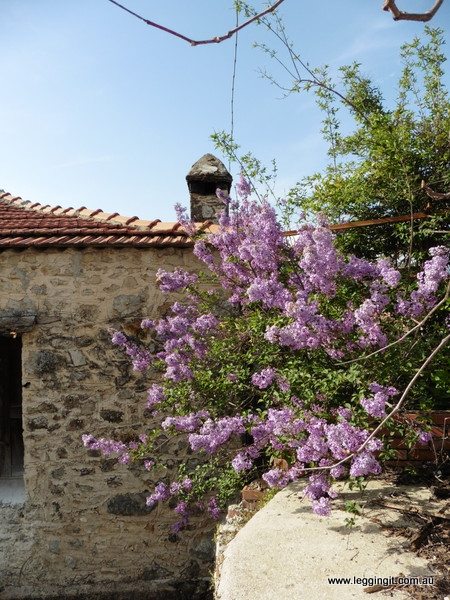 Around Uzumlu we found the locals really friendly and were always greeted with a “merhaba”‘(hello) or “günaydin”(good morning). Our Turkish neighbour would greet us with different things from her garden and a mini Turkish lesson. It was really nice. 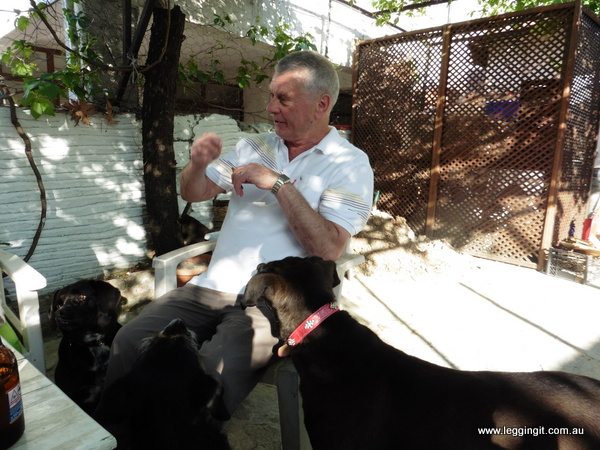 At the end of the day we’d catch up on all the gossip with some of the local expats at the Grape Vine, a local restaurant bar. It’s an aptly named place really because it’s here that we’d hear about Eddie’s ongoing battle with Turk Telecom. A local builder’s truck delivering steel reinforcing to a property near Eddie’s had snagged the wire to his Internet pole and ripped the pole in half. Each day we were greeted with daily updates.

As we’d enter The Grapes, we’d enter a microcosm of Britain. They were people from all over Britain who would probably have never mixed together whilst at home due to their different backgrounds. Here in Uzumlu they were thrown together with language and culture as their binding force. Most days we’d find Brian, hat pulled down, quietly plucking at his guitar, carefully choosing his words as he added something slightly philosophical, Eddie spinning a yarn in his Geordie accent, computer whizz Eddie dryly adding a joke, Weng scolding Paul and Suzie tutt tutting and sounding all schoolmarmish. We laughed when Martin all straight faced told us how when the window man arrived to fit windows the street dog who’d adopted Martin leapt up and ripped the leg of the poor mans jeans clean off, leaving him standing there with his unmentionables exposed. The poor guy hadn’t been seen since and sent his brother out instead.

It was here that we’d find out the best places to visit, the best beaches, and the best places to eat. Keith and Lorraine who had suggested Akyaka weeks ago got the map out and drew circles around Patara, Olüdeniz and a few other places along the coast. Meanwhile everyone else added their favourites.

It was great being accepted into the local expat group and on our first weekend in Uzumlu we were invited along for a night out in Fethiye which had been organised by Vanessa and John. What a blast our night out turned out to be. The Dolmus picked us up in the village square and delivered us to Fethiye where after a few drinks we headed to a local restaurant. Sadly midnight arrived far too quickly, just as we were getting into the local music and we made our way back to the Dolmus.

As we were in Uzumlu for two weeks we also got to spent a little one on one time dining with David and Siobhan, Hugh and Sue, and Computer Whizz Eddie who showed us his secret tin shed restaurant on a ride out to Ören.
Over our two weeks we ate at most of the restaurants and bars. We soon learnt Eddies Place had the best English Breakfast, Cadianda the best Turkish, Flora and Fauna the best coffee, Wine House the best people watching, Grape Garden the best hangout spot, and the Secret Garden the best turkish family restaurant. 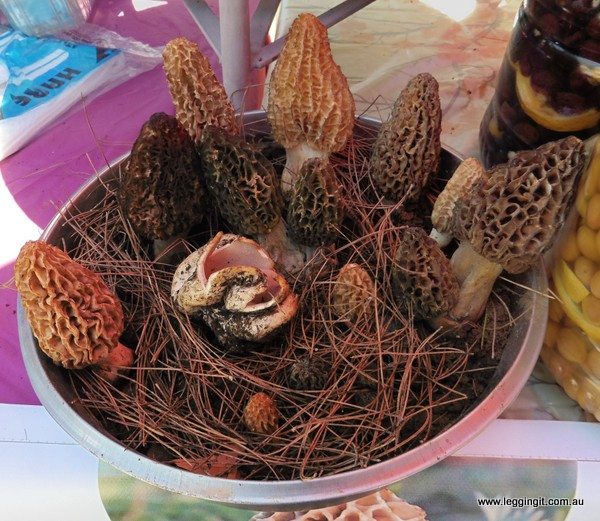 On our last weekend in Uzumlu the village was swamped with people as they descended on the village for the Uzumlu Mushroom Festival. The population of 4,000 swelled to 32,000 on Sunday as Uzumlu came alive. Local singers performed on the main stage and cultural groups in the main square. Homes set up chai and pancake stalls in their front yards, and stalls displayed products made by the local weavers and local handicrafts. Another big seller was local village wines with tables covered with glass and plastic bottles of the local head shaker.

Sadly as the Uzumlu Mushroom Festival came to an end our time in the beautiful little village also came to an end.
After Sandy returned we spent a few days with her before packing up again. Our next stop in Turkey is the coastal city of Finike.