One thing which is quite intriguing about Scotland is wherever you look there’s bits of history. Today we started the day by legging it up to the National Museum of Scotland.

The museum is surprisingly quite big, with an old domed glass roofed Victorian building at the front leading off to large galleries at the side and rear. Looking at the size of the museum we knew that going through the whole complex in one day would be impossible and a complete waste of time. With a collection of this size it’s much better to pick a section and slowly work your way through it.

We decided to visit the Scottish section which was basically a timeline trip through Scottish history . Getting from the main entry to the exhibition on the geological formation of Scotland on Lower floor proved to be a challenge as the passages from the central hall to the wings were blocked. Eventually we found our way however we entered the exhibition in the middle. It was quite interesting learning how Scotland and England were separate but as the continental land mass came together they were jammed together (and have been trying to separate ever since)

We then continued into the section on the early people’s of Scotland which contained interesting carved stones from the Pictish kingdom, burial goods from the beaker people, roman and Viking artefacts. There were lots of intriguing artefacts.
The Scottish story continued on the successive floors tracing the formation of a nation and the struggles with England and finally union.

There were exhibits from the Industrial Age and it told the story how Scotland changed from a rural society to a land of innovation. In the innovations area Dolly the sheep was on display, a steam train as well as the UK’s space rocket. 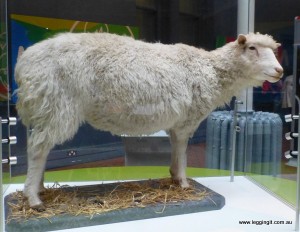 As it was close to the hour we made our way to the Millennium Clock in time for it to chime. It’s an art piece about the suffering of man in the 20th century and was amazing to see as it chimed in the hour.

We wandered around for about four hours before we were told they were closing the doors. Definitely an all day affair to visit this place in the future.